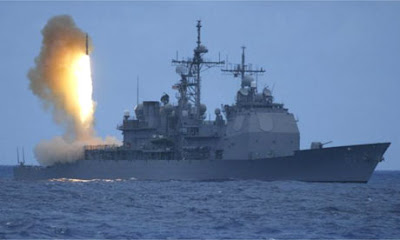 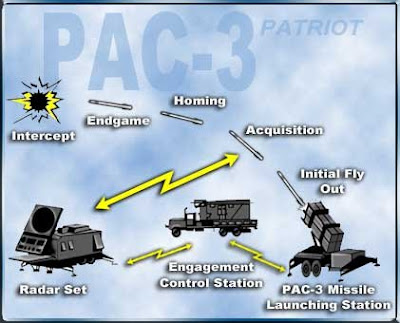 
The latest word is that Romania will be hosting the U.S. Army's ground-based "missile defense" systems. Russia is not pleased with these developments.
News that the U.S. is also about to deploy a PAC-3 missile battery in Poland led Russia's ambassador to NATO, Dmitry Rogozin, to recently state: "Do they really think that we will calmly watch the location of a rocket system, at a distance of 60 km from Kaliningrad?"

The deployment of SM-3, with several times the reach of the Patriot, on land and sea (the SM-3 will soon be converted to be deployed on land like the PAC-3) in the same Baltic Sea neighborhood will only makes matters more dangerous.

These same Army Patriot Advanced Capability-3 (PAC-3) systems are going to be deployed in Taiwan as the U.S. continues its military encirclement of China. U.S. PAC-3 systems have already been deployed in Japan and South Korea.

The Standard Missile-3 (SM-3), now deployed in the Persian Gulf and soon to be permanently based on Navy Aegis destroyers in the Baltic, South China, Mediterranean and Black Seas, has a range of 500 kilometers but can be enhanced for longer distances. The missile was used by the U.S. Navy to destroy a satellite 130 miles above the Pacific Ocean in February of 2008 in a test viewed by Admiral Michael Mullen, chairman of the U.S. Joint Chiefs of Staff. "The satellite was unlike any target the system was designed to go after....The satellite was in orbit rather than on a ballistic trajectory. Also, the satellite was traveling at incredible speeds," Mullen said.

Translation: the SM-3 also has "anti-satellite" (ASAT) weapons capability. That means the Pentagon can use the Aegis-based missile to knock out Russian or Chinese satellites as part of a first-strike attack.

The official authorization of Patriot transfers to Taiwan - the missiles are produced by Raytheon Company headquartered in Massachusetts, whose former vice president of Government Operations and Strategy William Lynn is now Obama's Deputy Secretary of Defense - resulted in China's vice foreign minister, He Yafei, saying "We believe this move endangers China's national security." Luo Yuan, senior researcher with the Chinese Academy of Military Science, added "The U.S. action gives China a justified cause to increase its national defense expenditure, to enhance the development and purchase of weapons, and to accelerate its modernization process in national defense....China did nothing to threaten the U.S., why should the US challenge our core strategic interests?"

Deputy Secretary of Defense Lynn delivered a speech in Washington, DC on January 21, where he demanded that Congress "put the Defense Department on a permanent footing to fight both low-intensity conflicts to maintaining air dominance and the ability to strike any target on Earth at any time....The next air warfare priority for the Pentagon is developing a next-generation, deep-penetrating strike capability that can overcome advanced air defenses."

The new Prompt Global Strike system is designed to accomplish just those objectives.

Related Topic(s): Congress; Democrat; Dominance; Military; NATO; Navy; Pentagon; Raytheon; Rocket; Strategy; (more...) Weapons, Add Tags  (less...)
Add to My Group(s)
Go To Commenting
The views expressed herein are the sole responsibility of the author and do not necessarily reflect those of this website or its editors.