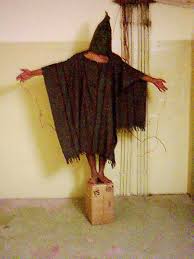 One of the wonderful aspects of the Judeo-Christian tradition is how so much of it reflects the consciousness of the poor and oppressed, while at the same time giving expression to a "preferential option for the poor." That's a gift for us in a culture that generally despises poor people, oppresses the world's impoverished majority, and spins the news in ways that ignore the poor and reflect a decided "preferential option for the rich."

This morning's first reading is especially valuable for us who live in under the torture regime of American Empire. It actually invites us inside the heads of tortured "terrorists." It raises the question, who are the real terrorists the forces of empire or those who resist them? In doing so, the reading from Second Maccabees sheds light on the contemporary debate about torture in service of empire. It also highlights parallels between the mentalities of "terrorists" then and now. The reading calls us to question our support for the entire War on Terror.

For starters, consider torture itself. Our culture actually debates torture's use, its effectiveness and morality! It does!

Previously, that would have been unthinkable. Torture used to be considered one of those intrinsic evils about which there simply could be no debate.

However, ever since Abu Ghraib gave the lie to George W. Bush's famous prevarication, "The United States doesn't do torture" ever since our government's redefinition of the word to exclude even waterboarding it has become apparent that Bush (and so many others of our "thought-leaders") was lying. So today, many prominent "court intellectuals" have been pushed to actually defend torture's permissibility.

But what do tortured terrorists actually think about having limbs removed and tongues cut out? Read today's selection about the Maccabee brothers and find out.

The Maccabees were members of a heroic family of guerrilla fighters who in the mid- 2nd century BCE terrorized the invading Greek forces of Antiochus IV Epiphanes. (Actually, "Maccabee" wasn't the family's name; it was more a nom de guerre for an entire resistance movement. The word meant "Hammer" the Hammer Gang so-called because of its delight in pounding to mincemeat the invaders of their beloved homeland. The term "Maccabee" was similar to "al Qaeda," when it simply meant "the list" a reference to the Rolodex of assets the CIA used when it employed al Qaeda back when they were "freedom fighters" against the Russians in Afghanistan.)

For his part, the Seleucid king, Antiochus, was anti-Semitic in the extreme. He considered the Jews historically and culturally backward. For him and his empire's advancement, Jews had to be brought into the 2nd century BCE even if it meant their kicking and screaming the whole way.

Today we might understand Antiochus' project as "modernizing" the Jews as Hellenizing them for purposes of imperial control. Evidently the Seleucid king subscribed to the position that if empire can persuade conquered peoples to adopt its patterns of thinking and especially of imagining God, the task of imperial administrators is made that much easier.

Many Jews agreed with the program of Antiochus. After all, the Greeks' empire seemed invincible. If the empire couldn't be beat, it was better to join it willingly. So, these "Hellenized Jews" stopped circumcising their sons, and changed their diets even to include eating pork. They became more Greek than the Greeks.

They also became the targets of Maccabee "terrorist" attacks. In today's terms, such Hellenized Jews would be the targets blown up by Maccabee suicide bombers in marketplaces located in Jewish but Greek-loving neighborhoods. (Even if the Maccabee targeting may have been more selective than that, it is certain that Hellenized Jews were as much the objects of Maccabee terror as were the Seleucid forces themselves.)

In countering such extremism, Antiochus IV proscribed the Jewish religion as itself criminal and illegitimate. This was very similar to the way many "Americans" consider Islam. So Greek troops burnt and otherwise desecrated copies of the Torah in much the same way as our "Christian" troops have frequently been caught burning or urinating on the Holy Koran and on corpses of Muslim resistance fighters.

Though the Greeks considered the Maccabean forces to be terrorist, faithful Jews admired them as national heroes and servants of God. They understood that the Maccabees were fighting a Holy War against the much more powerful Seleucids. It was David against Goliath all over again.

In any case, according to today's selection from Second Maccabees, seven brothers of the gang's leadership were finally arrested (along with their mother) by the Greek invaders. (This would have been reported to Greeks "back home" as a great triumph "Senior Leaders" captured making "our troops" and "our world" much safer.)

Related Topic(s): Empire; God; Heroes; Jews; Judeo-christian; Resistance; Sunday; Terrorism; Terrorist Group; Terrorists-Terrorism; (more...) Torture; Waterboarding, Add Tags  (less...)
Add to My Group(s)
Go To Commenting
The views expressed herein are the sole responsibility of the author and do not necessarily reflect those of this website or its editors.