Greetings to my regular readers and also to those who may be coming on with me for the first time. I have been with OEN for some years now, publishing a column just about every week during that time-span. You may (or may not[!]) have noticed that I haven't been around OEN too much over the past couple of months (in fact it's been over a month since I've been with you). The reason is that I have had an illness, and it has taken some time for my physicians to figure out what the correct treatment is. Well, that treatment has been performed and the outcome, so far at least, has been very positive. And so, I will be getting back on these pages on my usual regular basis.

However, in the meantime, while I was not up to maintaining my regular columns-pace, I did post on Twitter every now and again. And so in this space I am posting a series of those observations (with some editing because of course in this space I don't have to worry about the character limit.) If the Tweet referred to a particular newspaper article, that link appears first. And so:

Having tried bribery/extortion on Ukraine/Biden, with no result other than the start of impeachment proceedings, Trump is now trying the same tactic out on China: "I have a lot of options on China, but if they don't do what we want, we have tremendous, tremendous power." He doesn't learn. (And also, of course the Chinese didn't engage at all, because there were no arms shipments with which to be concerned.)

(As is by now widely referenced) in 1998, Lindsey Graham led the House impeachment of President Clinton for, wait for it, perjury to a grand jury about an affair with a consenting adult. As for the Trump impeachment for, e.g., seeking foreign political aid (a violation in and of itself of Federal law), Graham says that it's like the Salem witch trials. (As for what the real witch hunts, both for "witches" and for political enemies, were like see: click here 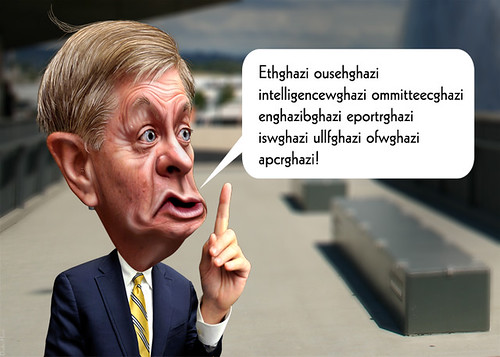 Lindsey Graham speaking Ghazi-Latin, back in the day when, of course, the target was Hillary Clinton (who, on certain days, Trump thinks he is still running against).
(Image by DonkeyHotey)   Details   DMCA

http://aol.com/article/news/2019/10/04/wrong-and-appalling-romney-blasts-trump-for-calling-on-china-to-probe-bidens/23827687/. By doing this, Mitt Romney is simply stepping up to be first in line for the 2020 Repub. nomination should for any reason (impeachment and "other") Trump is not the Repub. candidate. As for Sasse, he is just the first Repub. to engage in CYA, just in case "whatever" happens. (Of course, the latter has been silent as a Nebraska lamb since.)

Oct 6 (yes, a busy Tweet day for me, even though, unlike certain others, I don't have even one Tweet-ghost writer).

https://aol.com/article/news/2019/10/06/trump-allies-respond-to-second-whistleblower-why-should-i-care/23829819/". And the headline will be exactly the same when year is a 2 with a 0 next to it. But the primary reason the Trumpublicans© follow their Fuerher (oops, I mean Leader) is not electoral. Fearing the results of true democracy, these folks are married to Trump's proto-21st century-fascist policies: https://opednews.com/articles/Why-do-the-Republicans-Sti-by-Steven-Jonas-Detention_Fascism_Fascist_McConnell-190703-349.html".

https://nytimes.com/2019/10/06/us/politics/elizabeth-warren-black-voters.html. For oppo on Biden to offer (gently) to black voters, Warren will not raise them. But someone could or should focus on the following four major Biden policies/actions: mass incarceration, restarting the Drug War, Clarence Thomas/Anita Hill fiasco (which much of which I happened to have heard live --- it was excruciating), and protecting predatory lending by the Delaware credit card companies.

Steven Jonas, MD, MPH, MS is a Professor Emeritus of Preventive Medicine at StonyBrookMedicine (NY) and author/co-author/editor/co-editor of over 35 books. In addition to his position on OpEdNews as a "Trusted Author," he is a Senior Editor, (more...)
Related Topic(s): 2019 Problems; Bush; Drugs; Illness; Impeachment; Investigation; Likud; Michael Bloomberg; Perjury; Trump; (more...) Tweet, Add Tags  (less...)
Add to My Group(s)
Go To Commenting
The views expressed herein are the sole responsibility of the author and do not necessarily reflect those of this website or its editors.