The CDC has done an about-face with new guidelines on social distancing this morning. Citing new data indicating that isolation, separation, quarantine, and lockdown have an unforeseen side effect of aggravated loneliness, the agency came down on the side of hugs all around.

Dr Anthony Faustus, head of the National Institute for Maximization of Vaccine Profits, was quoted as saying, "We knew people weren't going to be too happy about staying locked indoors the first week of spring. But gosh darnit, whodathunk that it might affect their health?" 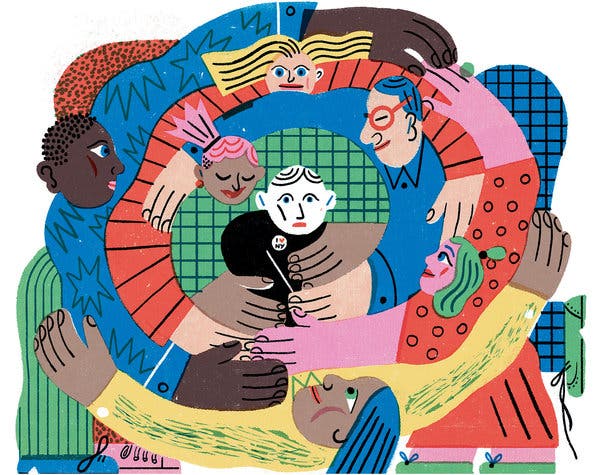 He went on to explain that some people kinda like getting within 6 feet of each other, and maybe there is some traditional folk wisdom in the idea that avoiding human touch isn't all peaches and cream.

"This, of course, does nothing to mitigate the fact that sophisticated and very mathematical computer models demonstrate conclusively that germs are passed in every tactile encounter." He referred with refreshing candor to the Scientific theory that germs cause disease. "It's a known fact," he explained.

But the latest findings from the World Center on Epidemiology, reported in the April 1 edition of Health Reports Weekly, indicate that happiness, socialization, and human touch together are responsible for a 273.5% increase in immune function, which more than compensates the 62.4% lower risk of contracting COVID. In marked contradistinction to previous marked contradistinctions, people are actually healthier when they touch each other.

"After our algorithm to optimize best optimal distance of approach crashed the Cray-15 supercomputer, we re-evaluated the assumptions implicit in the calculation. We were as surprised as anyone to realize that the reason for the software failure was a 'Divide by zero' error. Evidently, the best distance between any two people is no distance at all. From a purely public-health perspective, that is."

With this re-calibration, the CDC is now calling for universal hugs and kisses. They're banking on a quick turnaround from the deficit in warm fuzzies that has plagued the country since the guidelines of March 10 knocked the country on its ass.

"From the beginning, this is what I've always said all along," commented President Trump, astutely.

Airlines responded most positively to today's news. Plans to extend legroom on domestic flights were immediately canceled, and Virgin Airlines is even offering discounts for lap-seating. Common stock of Delta is up 12%, leading the biggest one-day gains ever reported for the Dow Jones Transportation Index.

In related news, the international implications of all this hugging and kissing have yet to be computed, but peace and love are showing the biggest gains in early trading on the Big Board.

Related Topic(s): April Fool; Humor; Satire; Satire; Social Change, Add Tags
Add to My Group(s)
Go To Commenting
The views expressed herein are the sole responsibility of the author and do not necessarily reflect those of this website or its editors.