Source: The Guardian
As Obama looks for a budget deal to forestall another shutdown, he should know a majority of Americans back economic justice 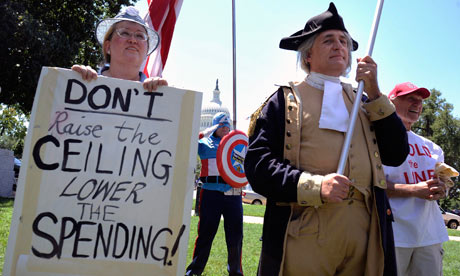 The rest of the world must have been fascinated at the spectacle that was the US government shutdown and threat of default on our public debt. Here is a country that not only has no public debt problem, but can pay any foreign creditors in its own currency -- that is, money that our central bank creates. Yet, even this "exorbitant privilege" -- as Barry Eichengreen titled his book about the dollar being the center of the international financial system -- was not enough to assure the world that Republicans would not cause disruption by attempting the impossible.

As expected, the Republicans were defeated and got nothing for their efforts other than a record low approval rating. The New Yorker's satirist Andy Borowitz summed up their "noble cause" with a fictional quote from Ted Cruz:

"The dream of keeping poor people from seeing a doctor must never die."

The outcome was never much in doubt. The Tea Party and its friends do not control the majority of the Congress, nor could anyone expect House majority leader John Boehner to defy the Chamber of Commerce, the Business Roundtable, and the rest of America's most powerful business lobbies after they made it clear they would not stomach even a temporary, technical default on US Treasury obligations. Indeed, it is testimony to the extremists' base of support within their party -- and their own stubbornness -- that they made it as far as they did.

If only the Democratic leadership had this kind of pressure to respond to its voters -- including the fear of losing primary elections that plagues so many Republicans -- now, there would be some democracy. This is because the majority of Democratic voters, unlike the Tea Party and its allies, have demands that are in line with the majority of the country.

For example, they want jobs for the more than 21 million Americans who cannot find full-time work; they believe (PDF) that everyone, not just the 1% who have gotten 95% of the income gains since 2009, should share in the benefits of economic growth. And they decidedly don't want any cuts in social security, Medicare, or the social safety net in general, in order to strike a "grand bargain" with the Republicans. In all of these views, they have the majority of the country on their side. "Majority rule" in the Democratic party would actually strengthen it -- unlike the disruptive influence that the Tea Party and its allies have had on the Republicans.

Yet, there is a huge disconnect between what passes for political debate in this country and what most Americans want, not to mention basic arithmetic and accounting. Why are we even talking about the national debt, when the net interest payments on the debt are about 1% of GDP -- as low as they have been for the past 60 years? This is the real burden of the debt: the cost of servicing it. This is what matters -- not the meaningless numbers, like $16.7trillion, that are thrown around to scare people, and distract them from the real problems that the country is facing.

How is it that our Democratic president, whose opponents have been utterly defeated in their efforts to prevent Congress from raising the debt ceiling, now feels that he has to negotiate with them over a purely fictional problem? Instead, Obama should be taking up the legitimate concerns of not only his own base, but the majority of Americans whose real income has stagnated or fallen for the past 30 years -- not to mention (and they are, in fact, not often mentioned) the 46 million Americans, which is close to one in six, who live below the poverty line.

This shows how much of our problem is one of public education. The Federal Reserve has created more than $2.7trillion since 2008, and contrary to popular misconceptions, this has not caused any problems with inflation, which is running at just 1.5% annually. This demonstrates that when the economy has so much slack and unemployment, we can finance public investment and job creation without adding to the net interest burden of the debt at all.

Federal Reserve Chairman Ben Bernanke appears to understand this and has done his part, perhaps hoping that Congress and the executive would do theirs. Instead, we have had budget tightening since 2010 (about 2.9% of potential GDP) and therefore inadequate growth to bring us back to the levels of employment before the great recession.

The Tea Party and its allies have been funded by the billionaire Koch brothers, and right-wing money has expanded a formidable conservative media empire -- from Fox News to the Wall Street Journal, and talk radio with tens of millions of followers. Billionaire granny-bashers who want to cut social security, like Pete Peterson, are able to exert considerable influence on the more mainstream outlets. On the other side -- well, there is a sizable amount of money but it is not so strategically deployed.

Still, the majority is holding its own for now, despite its under-representation in the public debate. President Obama will have to think twice about any grand bargain with the Republicans that harms senior citizens. As Obamacare takes effect and millions benefit from it, right-wing arguments about the role of government will sustain further losses. Eventually, the country will move on to the real, non-fictional, and serious issues of employment and income inequality.

Related Topic(s): Debate; Democratic; Obamacare; Republican, Add Tags
Add to My Group(s)
Go To Commenting
The views expressed herein are the sole responsibility of the author and do not necessarily reflect those of this website or its editors.