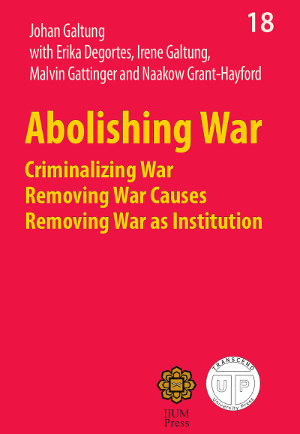 As the book's subtitle suggests, it proposes three types of approaches to eliminating war: "three approaches to have war join slavery and colonization in the dust-bin of history. No question of picking and choosing, they belong together and the more seamlessly, the better." I couldn't agree more, and will be drawing on the ideas in this book in the work we do at World Beyond War.

The book's longest section is on criminalizing war, and it offers an argument I haven't seen before. I think there's great value in the argument, and that it can augment others. Nonetheless, I'm going to quibble with it.

Here is a book that practically quotes the arguments of the Outlawrists of the 1920s without mentioning them. It recommends, as its first recommended course of action right on the inside of the front cover, recreating Japan's Article 9 for all states. And yet it largely ignores and bizarrely dismisses the existence of the Kellogg-Briand Pact, from which Article 9 derives (and which it practically quotes) and which already applies to most large nations.

The book's second recommendation is to somehow build on the Universal Declaration of Human Rights' "implicit" criminalization of war. Nowhere is it explained how an implicit criminalization of war is more useful than an explicit one. In fact, Irene Galtung rather wistfully imagines how nice it would be to have an explicit one. Nowhere is the problem mentioned that the United Nations, as "implicit" criminalizer of war, legalizes defensive and otherwise UN-authorized wars -- two loopholes that have been stretched and abused to effectively allow any Western war whatsoever. This is, of course, in contrast to the Kellogg-Briand Pact, which bans all war and requires that nations settle all of their disputes entirely peacefully.

In the one instance where the book refers to the Kellogg-Briand Pact, it claims that, "this opens two huge loop-holes: use of force by non-members, and by and on non-states." There are a number of errors in this claim. One of them is chronological. There were no laws banning war prior to Kellogg-Briand. In forbidding war between nations, the pact took war away in many cases from many major wagers of war. The pact was open to and remains open to all nations. Any nation that is not a member can simply send a letter to the U.S. State Department and instantly become a member. So, the so-called loophole for non-members is one that has been closing and could close further, but it wasn't opened by the pact. War was legal for all states against all states prior to 1928.

What about non-states? The states that made the pact considered, and still to this day consider, war by non-states to be illegal. In fact, they consider illegal almost any action, if not the very existence, of most entities that might wage war without being a state. Within states, killing by anyone other than the state, is forbidden by national laws and by customary standards of law -- as outlined, in fact, by the strategy pursued in the book by Galtung et alia -- on which, more in a second. The bigger shortcoming is the failure to outlaw war by a member state against a non-state, but most such wars are also wars on the populations of states and often against the will of the governments of those states, often -- indeed -- against yet other states using proxies to wage war for them. A shortcoming, moreover, is not a condemnation of a useful step as counterproductive; it's just a shortcoming requiring an additional step forward.

Clearly Galtung does not really think that criminalizing war between nations is an unhelpful step. He wants to do it singly, nation by nation, modeled on Japan's Article 9 (which arguably has the very same shortcomings as the Kellogg-Briand Pact, plus the shortcoming of only applying to a single nation). Of course, Article 9 is under threat, and somewhat similar statements in the Constitutions of Italy and Germany and other nations are even less adhered to. But Galtung is right: bans on war in national constitutions should be strengthened, defended, and complied with. Doing so, however, presents a problem of logic in dismissing the Kellogg-Briand Pact as unhelpful. Never mind the purity of heart of its creators (its creators in fact were masses of people who brought legislators to it kicking and screaming) or the perfection of compliance by its members heretofore. If Japan launches a major war next year, Galtung will still want Article 9 upheld -- or he should; I will. The Kellogg-Briand Pact is a law clearly banning all war for most major nations, including the least likely nations to agree to newly creating such a law today. Other nations could sign onto it and urge their fellow members to comply with it. Malaysia, for example, could choose to become a member of the pact and suddenly find itself a leader among its members by advocating for compliance -- and for accountability and reparations and reconciliation -- exactly as it would have to do with eternal vigilance if it instead used its own version of Article 9, only in this case with the major war makers of the world formally committed in clear language to compliance as well.

Because war is, in a major way, already illegal, calls to criminalize it ring in my ear a bit hollow, a bit like the rhetoric of the U.S. Congress proposing over and over again, year after year, to re-criminalize torture, rather than prosecuting torturers under long-standing laws. But the approach to criminalizing war proposed by Irene Galtung certainly has some merit. It doesn't exactly claim that war is now legal, but it does claim that in written law it is legal, and this strikes me as dangerous.

Irene Galtung's idea is that customary international law is higher than written international law or written national law. The problem, as she readily admits, is that -- being unwritten -- it is highly controversial. Still, what's needed is an act of interpretation not entirely unlike the interpretation of a written law. Galtung claims that all national constitutions provide a right to life, and that the right to use deadly force in self-defense exists only when such use is necessary for self-defense. War is deadly force, simply on a larger scale, and it is never necessary, as there are always alternatives. Therefore, logically, even if you'd be hard-pressed to get many well-paid lawyers or human rights organizations or governments or judges to admit it, war is a crime.

This argument (which I have, of course, only sketched very roughly) is smart, logical, and educationally useful. I plan to repeat it often. But what appeals to "customary law" come down to are attempts to radically change legal custom on the authority of current legal custom (reinterpreted). That this couldn't be helped by also pointing to existing laws like the Kellogg-Briand Pact is difficult for me to imagine. In fact, later in the book the authors cite the UN's Declaration of the Right of the Peoples to Peace. That we have a right to peace means that we have a right to the absence of war. The Declaration states that it:

"Emphasizes that ensuring the exercise of the right of peoples to peace demands that the policies of States be directed towards the elimination of the threat of war, particularly nuclear war, the renunciation of the use of force in international relations and the settlement of international disputes by peaceful means on the basis of the Charter of the United Nations."

The weakness is in those last few words, as the Charter contradicts itself and permits war. The Kellogg-Briand Pact lacks that particular weakness. I would love someday to hear a clear statement from Johan Galtung on what weaknesses he thinks its carries that justify its dismissal from public awareness and use.

David Swanson is the author of "When the World Outlawed War," "War Is A Lie" and "Daybreak: Undoing the Imperial Presidency and Forming a More Perfect Union." He blogs at http://davidswanson.org and http://warisacrime.org and works for the online (more...)
Related Topic(s): Laws; Peace; Peace; Wars, Add Tags
Add to My Group(s)
Go To Commenting
The views expressed herein are the sole responsibility of the author and do not necessarily reflect those of this website or its editors.