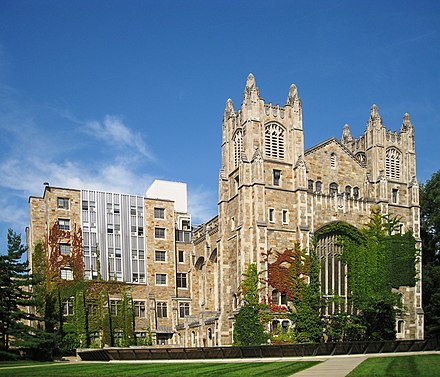 photo of the University of Michigan Law School

[No local officials surveyed by The Ann Arbor News/MLive said they're supporting any other candidates than Sanders, Warren, and Buttigieg, such as Joe Biden, Amy Klobuchar or Michael Bloomberg.]

Sanders, who was the top choice for Ann Arbor voters in 2016 and led a recent Michigan poll, is the preferred choice of state Rep. Yousef Rabhi, D-Ann Arbor, and Ann Arbor City Council Members Jeff Hayner and Ali Ramlawi. He also has the endorsement of the Michigan Daily, the University of Michigan student newspaper.

Ramlawi, D-5th Ward, said Sanders has been consistent with his political platform for decades, is the most trustworthy politician running for president and has the best chance at defeating Trump. "For my whole life, Bernie Sanders has been a champion of the American experiment," Ramlawi said in an endorsement statement released by the Sanders campaign. "His national policies speak to me and represent our best (and perhaps last) opportunity to address critical issues that communities like Ann Arbor are dealing with affordable housing, mass transit, climate change, clean water, and clean air. We need a national champion we can trust and believe. For me, that is Bernie Sanders."

Hayner said he supports Sanders because he's honest, consistent in his calls for social, economic and environmental justice, empathetic to the working class and has broad support from Democrats and independent thinkers alike. "Honesty, integrity and lack of hypocrisy are paramount in choosing who I want to represent me, and Bernie Sanders exemplifies this," said Hayner, D-1st Ward.

The Sanders campaign also released an endorsement statement from Rabhi, citing Sanders' record of "putting the people of this country over corporate interests. His commitment to social justice and global solidarity with worker movements is the gold standard of what I expect out of a public servant. In an environment with constant pressure to abandon our core values for electoral expediency, I appreciate that he has been an unflinching advocate for what is right regardless of the political consequences."

Related Topic(s): Bernie Sanders 2020 Endorsements; Michigan Primary 2020, Add Tags
Add to My Group(s)
Go To Commenting
The views expressed herein are the sole responsibility of the author and do not necessarily reflect those of this website or its editors.