In my previous article , I made the case for impeaching Trump for his actual worst misdeed: his beyond-criminal climate policy. The hostility level of some comments I received staggers the imagination--especially for an idea that, while admittedly outside the current political box, seems the most obvious common sense. Common sense, in the current degenerate state of US political discourse, is clearly not so common. 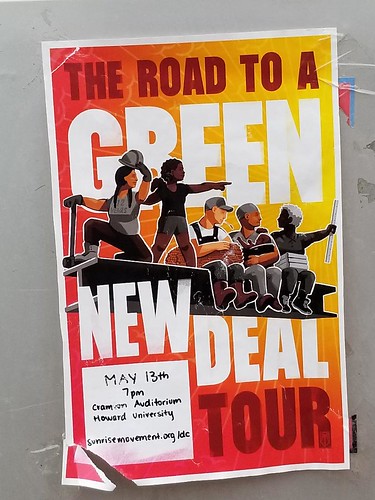 Impeachment, after all, is the Constitutional remedy for removing a president manifestly unfit for office, whether or not the unfitness entails statutory crimes. To quote a foremost early framer and interpreter of the Constitution (Alexander Hamilton, in Federalist Paper 65 ), the Constitution's impeachment standard of "high crimes and misdemeanors" means "offenses which proceed from the misconduct of public men, or, in other words, from the abuse or violation of some public trust." The standard specifically designates the grave misconduct of public officials acting as such during their tenure, not statutory crimes forbidden for all.

Now, in the face or humanity's existential climate crisis--with an ever-more-desperate action timetable--what could be a graver violation of the public trust than Trump's extremist vendetta against climate science ? The Trump administration's recent heavy-handed attempt to derail the Juliana youth climate lawsuit and draconian call for 20 years imprisonment for protesters even conspiring to disrupt the construction of a gas or oil pipeline are telltale signals that Trump's climate-destroying vendetta is only ramping up. Trump's insanity must be stopped, and I'm delighted that at least one other writer (independently of me) has broached the idea of impeaching Trump on climate grounds.

Of course, in a world gone mad, trying to rally people around common sense may itself be a form of madness, as Blaise Pascal memorably warned us. Given that politics is a human activity, the limited sanity of voters and elected officials places sizable constraints on the feasibility of advocating sane, sensible policies. And, as eminent theologian Reinhold Niebuhr pointed out, in Moral Man and Immoral Society, individuals quite sane and moral for everyday purposes are apt to succumb to the craziness of group egotism when acting as members of larger social groups (which helps explain the millions of decent people who voted for Trump). Niebuhr's analysis of group egotism proves especially useful in nations like today's United States, where a bipartisan ruling class utterly out of tune with average citizens puts its selfish class interests even above saving civilization.

To think Congressional Democrats, as part of the selfish ruling class, would call for Trump's impeachment on the principled, commonsense ground that his climate policies are getting ever more dangerously extreme is the height of folly. Since taking the climate crisis seriously--which demands impeaching climate terrorist Trump--would, in Naomi Klein's words, "change everything," removing Trump from office because he's a dangerous ecocidal climate criminal is the last thing ruling Democrats invested in the bipartisan status quo want to do. Nancy Pelosi's derisive pooh-poohing of the Green New Deal, along with the Democratic National Committee's refusal even to hold a climate-centered debate, should convey a forceful message to climate activists: establishment Dems consider taking humanity's climate crisis seriously a far graver threat than the climate crisis itself.

Fully grokking such destructive selfishness by ruling elites, Reinhold Niebuhr advocated peaceful--but socially disruptive--civil disobedience by social movements as the only way to shatter the group egotism of a ruling class bitterly opposed to citizen demands for justice. In fact, by warmly recommending Gandhi's successful civil disobedience in India to US blacks, Niebuhr was a major formative influence on the intellectual-but-pragmatic young theologian Martin Luther King.

So, to be clear, I find it the Everest of all silliness to think Congressional Democrats would readily impeach Trump for the criminal insanity of pouring gasoline--or, at least, "freedom gas,"which establishment Democrats love--on the global climate fire. But what Congressional Democrats would willingly do is hardly a reliable guide to what climate-serious movements should demand. As abolitionist leader Frederick Douglass notably said,"Power concedes nothing without a demand." For social movements, that's almost true by definition, since the whole purpose of such movements is to demand justice that powerful politicians won't willingly give.

Douglass's point is fundamental for social movements, but I'd like to expand upon it in ways crucial for the desperately needed movements demanding a Green New Deal (GND). As should be self-evident by now, establishment Democrats' real agenda is to quash all talk of the GND. Or, should the GND prove too popular a litmus test of candidate progressivism, to guarantee that all candidate embrace of the GND is the purest political lip service.

That establishment heartthrob Joe Biden--predictably the last Democratic presidential candidate to take a stance on the GND--was forced to pay the idea homage is testimony to its growing popular clout. Given Biden's anti-progressive track record and political donors and sponsors, it's also the summit of hypocrisy: the tribute that vice is forced to pay to virtue. If Biden were honest, he would have said, "Read my lips: No Green New Deal!" The last thing Biden wants is to have his lips successfully read.

Pretty clearly, establishment Democrats want nothing more than lip service to come of the GND. If they were the least bit serious about it, they would hardly be backing a fence-sitter with a dubious progressive record like Joe Biden, but a progressive stalwart like Bernie Sanders, whose favored policies have so long aligned with the GND that he deserves to be called its godfather. So far, GND movement activists--I think especially of Sunrise--have shown healthy skepticism toward Biden's attempts to reinvent himself as a progressive Green New Dealer. But even if Sunrise activists successfully dodge the Biden trap, there's substantial risk of non-activist GND supporters, less vigilant and routinely misled by liberal corporate media touting Biden, tumbling headfirst in.

Given Democrats routine, well-documented history of sabotaging progressive policies upon gaining office, GND movement activists need to demand more than public declarations of support for the GND. They need to make other, correlated demands--preferably ones involving gutsy present action--that serve as litmus tests of seriousness about humanity's climate crisis and the GND. I can think of no more forceful litmus test than demanding that Democratic presidential candidates call for the impeachment of climate action's most determined, villainous enemy. Letting Trump get off scot-free with arguably the most destructive crime in recorded history is hardly consistent with climate seriousness. And that level of climate seriousness is crucial to pushing a plan as radical and mammoth in scale as the GND.

Only Democrat presidential hopefuls brazen and principled enough to call for Trump's impeachment for climate terrorism care enough about climate to do the heavy political lifting implementing the GND will demand. Since this requires action right now--and not in some hazy, post-election future--it's virtually a foolproof litmus test. But beyond serving as a potent litmus test, it's also strategically attuned to the seldom-discussed political realities of implementing the GND--realities that require the virtual political annihilation of today's Republican Party (object of Joe Biden's hopelessly misguided "reach across the aisle"). I'll discuss that urgent strategic aspect of impeaching Trump for climate crimes--thereby stigmatizing Senate Republicans who refuse to convict him as criminal co-conspirators--in my next article.