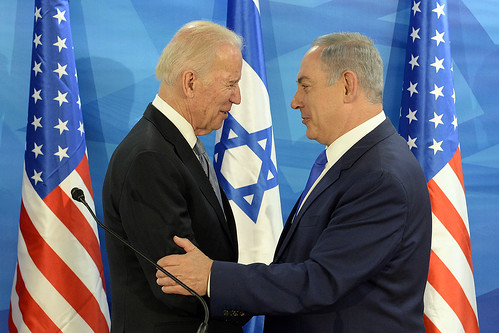 Joe Biden has been in mainstream Democratic politics longer than any other politician running for president, and as he said in 2014, "I have long, long ties with the American Jewish community."

Below are excerpts of the former vice president's remarks on Jews and Israel, emphasizing these themes: Jewish influence transformed American society for the better; American Jews need Israel in order to be safe here; and efforts to delegitimize the Jewish state, or even to protest the 2014 Gaza onslaught, are anti-Semitic.

"I'm a Zionist," Biden has said on many occasions. He has bragged about raising money from AIPAC and of knowing every Israeli prime minister since Golda Meir, and dismissed the idea that Israel hurts U.S. foreign policy.

"Israel is the single greatest strength America has in the Middle East," Biden has said. Israel is a "security necessity" for the U.S.

In the several speeches I've dug up, there is hardly a reference to Palestinians except as foot-draggers on the peace process. Though yes, he's all for the two-state solution.

And meantime, Biden has kisses for Benjamin Netanyahu. "Send a message to Bibi. I love him." Even if he drives me crazy, Biden said. The love message came in 2014 a few months after the Gaza slaughter, in which Israel killed 500 children.

It will be interesting to watch how much the senior politician walks back these declarations of love and regard in coming months. Israel is clearly dividing the Democratic base, with many Dems critical of Israel. Netanyahu is openly branded a racist (by Beto O'Rourke, no less), and many Dems have shunned AIPAC. If Biden is backpedaling on Anita Hill, he may have to do the same on Netanyahu.

In 2011 Biden bragged about raising money from AIPAC, to a Jewish audience in Detroit.

(So much for those correcting Ilhan Omar, you don't get money at AIPAC.)

Biden said he'd traveled often to Israel "I've experienced the magic of Israel many, many times" and was a Zionist from jump:

"About 18, 20 years ago, I was speaking to the Zionist Organization of Baltimore. And I said, I am a Zionist, for I learned you do not have to be a Jew to be a Zionist...

He spoke of the "demographic" threat to the Jewish state from too many Palestinians:

Philip Weiss is a longtime writer and journalist in New York. He co-edits a website on Israel/Palestine, Mondoweiss.net, which he founded in order to foster the movement for greater fairness and justice for Palestinians in American foreign policy. He is currently working on a novel about the US in Australia during WW2.
Related Topic(s): AIPAC; Bibi Netanyahu; Hamas; Israel; Israel And Palestine; Israel On The Potomac; Israeli Pressure On US; Joe Biden; Love, Add Tags
Add to My Group(s)
Go To Commenting
The views expressed herein are the sole responsibility of the author and do not necessarily reflect those of this website or its editors.