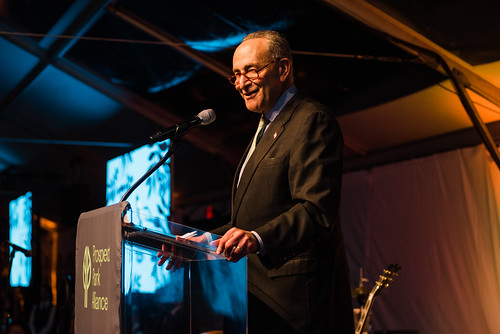 Chuck Schumer--.One may smile and smile, and be a villain.. (Shakespeare)
(Image by Prospect Park Alliance)   Details   DMCA

If I read Chuck Schumer correctly, he generally assumes his progressive opponents are powerless wimps and that he can just serve his Wall Street and AIPAC masters without taking our views or feelings into account. Or even that we're "f*cking retarded," as Schumer evidently believes but it took Rahm Emanuel to actually say. Schumer, by contrast, typically goes about his business of screwing progressives without getting too emotionally or verbally worked up about us.

But occasionally--I hope ever increasingly--we progressives manage to get under his skin and Schumer does (usually not says) something incredibly spiteful. And potentially incredibly stupid, provided Schumer has severely underestimated his progressive opponents' numbers, resolve, and strategic savvy.

Now, given progressives' long years of political impotence--the same history of futile tethering to the anti-progressive Democratic Party that prompted Rahm Emanuel to ask, "Where the hell will they go?"--Schumer's calculus of screwing progressives without backlash has worked incredibly well. Perhaps an occasional grumble of protest (say, by the ACLU and the Center for Constitutional Rights) when he actually sought to violate the Constitution, as Schumer's irrational level of aversion to the BDS movement (abetted by Congress's largest AIPAC-sponsored donations) rashly compelled him to do. But nothing like career-threatening backlash from his rashness; such a powerful shield is Schumer's prowess as a Wall Street fundraiser for Democrats that it's been long years since he's even faced the indignity of a primary.

But now a new generation of progressives--ones at long last serious about forcing Democrats to address humanity's climate emergency--has nettled Schumer into a gesture of unprecedented rashness and stupidity, one that could inflict enormous lasting damage on his political career. I refer to his promotion of fossil fuel puppet Joe Manchin to the post of top Democrat on the Senate Energy and Natural Resources Committee.

See, given the Trump administration's and Republicans' "criminally insane" climate and energy policies, it's hard to imagine Schumer inflicting worse harm on the common good than promoting the Democrat most likely by far to rubber-stamp those policies to serve as lead Democrat on a powerful energy committee.

Whatever Manchin's political survival needs as a Democrat in a red state traditionally dominated by the coal industry, his fossil fuel ties and embrace of an "all of the above" energy policy make him the most perverse imaginable choice for such a post. Especially at the potentially "game-changing" moment young climate activists, such as Congressional freshman Alexandria Ocasio-Cortez (AOC) and the Sunrise Movement, have placed unprecedented pressure on Democrats for serious climate action and a Green New Deal. With deeply irrational ecological and political rashness, Schumer decided to spit in their faces. One can only imagine he'd had far too much of newbie Ocasio-Cortez (who warned against promoting Manchin) and "those snot-nosed climate brats" brazenly challenging the party leadership and decided to exercise some harsh discipline. At the price of a livable climate.

Superficially, it's easy to imagine the haughty, experienced Schumer feeling simply furious at AOC's and Sunrise's brazen challenges to the Democratic Party leadership--and above all, to his own authority as the nation's most powerful Democrat. But, as is often the case when generations conflict, the roots of his intense, politically imprudent wrath probably go deeper, perhaps involving a threat to his worldview and very identity. On any other terms, it's hard to imagine such an intelligent, calculating politician being so suicidally rash.

In fact, this article's title, with its deliberate allusion to the subtitle of Naomi Klein's groundbreaking book This Changes Everything, hints at the existential crisis quite plausibly underlying Schumer's crazy compulsion to spit in the faces of AOC and the Sunrise climate movement. Readers will recall that Klein's book is subtitled "Capitalism vs. the Climate"; by substituting Schumer's name for "Capitalism," I mean to imply that Schumer's style of politics, intimately tied to a brand of neoliberal capitalism utterly incompatible with saving the climate, is likewise incompatible with preserving a humanly livable climate.

Schumer's brand of rich-donor-serving politics--a brand to which he's devoted most of his political life--must go the way of the dinosaurs if we are to save a livable climate and human civilization with it. As a result, it's inevitable that Schumer must fight a life-or-death battle with the first truly demanding climate activists to come along. AOC and the Sunrise Movement, by demanding a Green New Deal, have threatened Schumer's very political identity; achieving a Green New Deal is utterly incompatible with Schumer's Wall Street, K Street, and AIPAC donors continuing to exercise veto power over climate-preserving policy. At some level of consciousness Schumer knows this, and the only way he can save his political identity is by brutally quashing AOC's and Sunrise's Green New Deal aims.

In a sense, Schumer's promotion of Manchin is a form of de facto climate change denial, and Schumer's motives for his de facto denial closely parallel the motives Naomi Klein brilliantly attributes to more straightforward (generally Republican) climate change deniers. As Klein writes (in reporting on a Heartland Institute convention devoted to right-wing climate change denial), "Indeed, if you ask the Heartlanders, climate change makes some kind of left-wing revolution virtually inevitable, which is precisely why they are so determined to deny its reality." Precisely-- and the "left-wing revolution" represented by a Green New Deal threatens Schumer's brand of rich-donor-dominated politics just as much as it threatens right-wingers' largely government-free brand. Schumer's model of donor-determined policymaking demands quashing the sheer amount of popular say over policy required by a Green New Deal. Schumer knows that, so climate be damned!

Achieving a Green New Deal--and thereby aligning U.S. policy with a global effort to save the climate--depends on the Sunrise Movement and politicians like AOC realizing this is a war to the death as much as Schumer does. The Green New Deal will be achieved--if at all--over Schumer's politically dead body, and Sunrise simply can't join the battle too soon. I strongly urge them to join it over the Manchin appointment.

If this section's subtitle suggests to readers a call for superhero intervention, the allusion is quite deliberate. In a very real sense, the gutsy young climate activists of the Sunrise Movement are my superheroes. And, as an ardent admirer of Naomi Klein, I was delighted to discover that they appear to be her superheroes as well. Covering Sunrise's Nancy Pelosi protest, Klein wrote,