Note: This is the fifth in an occasional series of columns that bear relevance to current events that I have published in the past both on OpEdNews and other sites. There is just a bit of editing here and there. As noted below, the original of this column was published just about a year ago, following the Charlottesville Horror and Trump's response to it.

Originally, of course, it was first his much quoted statement that there are "some very fine people on both sides" that kept his long-standing racist ball rolling (see just below). In this past year, Trump has doubled, tripled, and what-have-you'd down on this racism, from his continuing attacks on racism-protesting NFL players to his continuing attacks on such African-American political leaders such as Maxine Waters. Of course, as I have previously pointed out, Trump started his campaign for the Presidency, back in 2011, directly on the theme of racism, back then becoming the principal leader of the "Birther Movement," which theme of course he repeated in the 2016 campaign. It seems particularly appropriate to offer the column below for your consideration, on the first anniversary of the Charlottesville Horror.

Introduction: Are Trump's racism (as well as his misogyny, Islamophobia, xenophobia, and homophobia) anything new, for a Republican? Well, no, not in terms of policy, over the last 50 years or so. But in general Republicans have always made moves to put covers on their racism, to introduce "deniability," even as the Party has moved ever-further rightward. The strategy/tactic goes back 50-plus years, under the hood of what I have called "The Republican Rightward Imperative." Trump has just undressed Repub. doctrine in public, taken the hood off as it were, bringing it all out into the open. And now to the original column.

In the wake of Charlottesville and the Trumpite response to it, the question can be asked, how far back does racism go in the Republican Party? Well, in 1962, a young Republican lawyer named William Rehnquist was personally found, by a U.S. Assistant Attorney and an FBI agent, to be attempting to interfere with the voting rights of minority persons in Phoenix, AZ. He was not charged. Rehnquist, who became a prominent supporter of Barry Goldwater of Arizona in the 1964 Presidential election, denied that the incident ever took place, although there is written evidence that it did.

In neither of his subsequent confirmation hearings before the Senate Judiciary Committee, on his nomination to the Supreme Court by Richard Nixon in 1971, nor his nomination for Chief Justice by Ronald Reagan in 1986, was he questioned about the incident. If he had been, and he had denied that it happened, a future Chief Justice of the Supreme Court apparently would have been committing perjury. But his support for Goldwater, the Republican Presidential nominee in 1964, was entirely consistent with his racist activities in 1962. For one thing, Goldwater had famously voted against the Civil Rights Act of 1964. 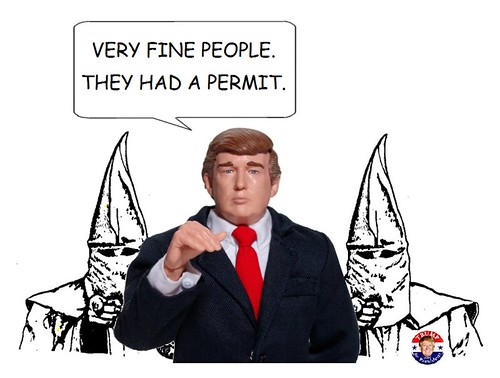 Beginning shortly after he was first elected President in 1968, as is well-known, Richard Nixon began implanting what he openly termed the "Southern Strategy" into the bone-marrow of the Republican Party. It entailed moving the Party in the direction of making racism central to their policy-making so that, following the Democrats' enactment of strong civil rights legislation and subsequent policies in the 1960s, the Repubs. could take over the South politically. Of course, all the while since, for the most part, until Trump, they denied that they were doing what they were doing.

(There was an occasional break in that wall. For example, in his confessional after he was released from prison, John Erlichman, Nixon's top domestic policy advisor, admitted that the so-called "Drug War"really had nothing to do with drugs but rather with being able to actively discriminate against and imprison significant numbers of African-Americans without appearing to do so: a furtherance of racist policy, but still at least in part sub rosa.)

Further examples? The first campaign stop that Ronald Reagan made following his nomination for President by the Republican Party in 1980 was at the tiny hamlet of Philadelphia, MS. The locale is significant only because it is the place that three northern civil rights workers were murdered by a white gang, including members of law enforcement, in the "Freedom Summer" of 1964. (I happened to know one of them a bit, a younger high-school mate named Andrew Goodman.) Nothing outright, but very symbolic to those Southerners who took note of such things.

That was followed by Reagan's usage of such terms, during his Presidency, as "welfare queen," and "young bucks" when referring to black young men. (When following the shooting of Ronald Reagan by John Hinckley, Jr. on a Washington, DC street, one African-American passerby was asked by a radio reporter if she thought that Hinckley had done anything wrong, she replied, "he missed." African-Americans knew which side Reagan was on.) And so it went.

Beginning with Nixon, potential Republican candidates have found that the best way to secure their party's nomination for virtually any position was to move steadily to the right, continually attempting to outflank their intra-party opponents on those issues. In the event, the "moderate" Republicans of an earlier time, like Governor Nelson Rockefeller and Senator Jacob Javits were left far behind. And numbers of Republicans who out-flanked the Rockefellers and the Javits' to the right, were themselves outflanked in later years. The Rightward Imperative became the key to success in intra-Republican Party politics. I have beenwriting on this subjectfor many years. But why has this occurred? As I said back in 2010 (modified a bit for this column):

"The Republicans do have real policies on many of the serious, substantive, problems facing the country. The problem for them is that they can hardly run on them. The GOP represents major sectors of the US economy: the extractive industries, the military industrial complex, the prison-industrial complex, corporate agriculture, the 'health' insurance and pharmaceutical industries, and so on. But [at least until Trump --- see below] they could and can hardly run on a platform of 'let the oil and coal companies do whatever they want to,' 'we want the rich to get richer, donchaknow,' 'we want to export as much American capital overseas where it can make larger profits than it can here, so we really want to de-industrialize our country,' 'we don't care about the health of the American people but we do care about the profits of the health care industry,' 'we would like to have permanent war if we can get it,' 'we want to convert the US economy from industrial capitalism to finance capitalism,' and so forth."

And so successful Republican candidates have consistently run using the cover of the ever-Rightward Imperative on such "issues" as "big government," "cut 'entitlements', "cut taxes," "deregulation," and, not in quotes, suppressing/repressing women's and LGBT rights. But in addition to the open adoption of the latter, the underlying message of the Party, going back to Reagan, has increasingly been based in racism, xenophobia, and religious authoritarianism. But to repeat, for the most part down to the present time, it has been an underlying message, often presented in code words. (Interestingly enough, xenophobia happens to go back to the founding of the party in the 1850s. The anti-immigrant American Party, popularly known as the "Know-Nothings," was one of its original incorporators.) And then came Trump.

In his quest for the Republican nomination, as a totally unqualified person with no experience in government, a very shaky history in business (the multiple bankruptcies, the inability to obtain US bank loans since 1996, the dependence on Russian business financing), and a notoriously small knowledge-base, he has almost singlehandedly taken the Republican Rightward Imperative from a tactic and strategy that almost always had "deniability," to one that he put forth openly, beginning, of course in 2011 with "birtherism."

That Muslim was born in Kenya.
(Image by DonkeyHotey)   Details   DMCA

With birtherism and then the open xenophobia, the Islamophobia, the anti-LGBT rhetoric and policies, the open adoption of religious authoritarianism (going as far as to propose imprisoning women who have had an abortion) and the selection of a known Dominionist to be his Vice-Presidential nominee, Trump has continued to follow the Right-wing Imperative, except that it is now all out in the open. It has led to what he himself, not some script-writer for him, has really saidabout the tragedy of Charlottesville. And so the Kluxers, the neo-Nazis, the anti-Semites (who are now surfacing),the Far Right Religionists, led by the likes of David Duke, are coming out in the open, declaring their allegiance to Trump.

Trump presents a problem for the Republicans. These themes go back 50+ years, but their clothes have been taken off, if, that is, they stick with Trump. And that's a toughie (see Jeff Flake). "Being primaried" by someone further to the Right, which is at the essence of the Rightward Imperative, is now very much a possibility for any Repub. who leaves Trump behind. Privately, it is likely that many are hoping (praying[?]) that Robert Mueller will solve their problem for them. But then the Repubs. could face another serious problem that I described briefly in my previous column: Trump pardons everyone including himself, resigns, and then sets up a new Far Right Party, with Steve Bannon as his Chief of Staff and the True Trumpites, like Corey Lewandowski, Kelly Anne Conway, and Roger Stone, quickly signing on.

Trump is a different kind of Repub. only because he lays it all out there. He is a product of the 50-year-old Republican Rightward Imperative who just doesn't bother with coded words and actions. In ripping the mask (or the hood, if you will) off the real modern Republican Party, if this leads to the development of a Popular Front of opponents to these Repub. policies, in that sense he will have proven to be invaluable for the U.S. historico-political process.

This column is a slightly updated version of one that originally appeared on OpEdNews on August 25, 2017, at: https://www.opednews.com/articles/The-Right-wing-Imperative-by-Steven-Jonas-African-americans_Islamophobia_Misogyny_Republican-Hate-170825-443.html.

Steven Jonas, MD, MPH, MS is a Professor Emeritus of Preventive Medicine at StonyBrookMedicine (NY) and author/co-author/editor/co-editor of over 35 books. In addition to his position on OpEdNews as a "Trusted Author," he is a Senior Editor, (more...)
Related Topic(s): Birtherism; Goldwater; Party Machine Republican; Party Platforms GOP RNC; Party Politics Republican; Racism; Republican Extremism; Republican Racism; Trump Attacks Athletes; Trump Attacks Obama; (more...) Trump Presidency; Trump Racist, Add Tags  (less...)
Add to My Group(s)
Go To Commenting
The views expressed herein are the sole responsibility of the author and do not necessarily reflect those of this website or its editors.