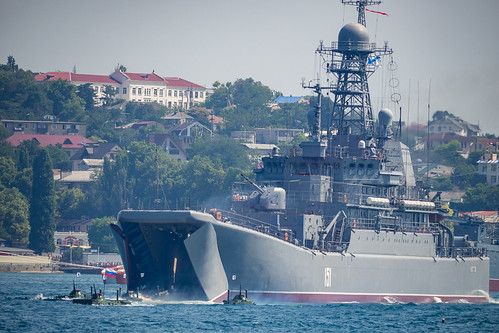 President Vladimir Putin has approved the setting up of a Russian Navy logistics hub on the Red Sea, lying between Africa and Asia, tasking the Ministry of Defense with signing a previously discussed agreement with Sudan, RT reported Monday.

The proposal to establish a facility in the North-African country, for which Putin gave the green light on Monday, was brought forward by the Russian government last week.

Moscow and Khartoum signed a seven-year-long military cooperation deal last year and the prospect of a naval logistics hub has been already discussed by the sides in detail.

The Sudanese facility is intended to station and repair Russian ships as well as to store supplies essential for the vessels during their lengthy missions, RT said adding that the base will be staffed with up to 300 service personnel, and will be able to host up to four warships simultaneously, including those with nuclear propulsion systems.

Additionally, Russia will be able to use Sudan's seaports and airports to transport in and out weapons, ammunition, and any equipment required to operate the base and "keep the warships mission-ready." According to the agreement, the host country will collect no tolls or fees of any kind, the RT said.

The agreement for the Russian naval base will be for 25 years. It will then be automatically extended for ten-year periods if needed.

According to media reports, it will be located in the curtilage of Port Sudan City, the country's main port

The Sudanese facility will likely be similar in function to the one currently operated by Russia in Tartus, on the Mediterranean coast of Syria, according to RT.

The Russian fleet needs a well-developed system of overseas military bases. Its planned logistics center on Sudan's Red Sea coast is the first step - but one of exceptional significance, says Mikhail Khodarenok, retired colonel of the Russian Armed Forces.

The issue of establishing and improving naval bases to operate Russia's fleet in foreign seas has always been a priority for the country's military and political leadership, Col Khodarenok said adding: For example, before the end of World War I, it was agreed by the Allied Powers that the Russian Empire, as one of the victors, would receive the Turkish Straits (that is, the Bosphorus and the Dardanelles) and claim the port town of Bizerte in Tunisia, which would serve as a naval base for the Russian fleet in the Mediterranean.

At the Potsdam Conference of 1945, Soviet state leader Joseph Stalin sought trusteeship over Libya, formerly an Italian colony, which had joined the war on the side of the Axis Powers, Germany, Italy, and Japan. Had that happened, Moscow would have acquired important strongholds on the Mediterranean coast.

It should be noted, however, that the history of the Soviet Navy, when it comes to military bases and ports, has many tragic chapters. For one reason or another, most sites were lost, and, in many cases, there is no chance of reclaiming them.

A Sudan base is just the first step

Col Khodarenok argued that sooner or later, Russia will face the challenge of restoring itself as a maritime power. It will regain economic might, military strength, and international status and respect. Therefore, the Russian Navy needs a well-developed system of naval bases worldwide.

Author and journalist. Author of Islamic Pakistan: Illusions & Reality; Islam in the Post-Cold War Era; Islam & Modernism; Islam & Muslims in the Post-9/11 America. Currently working as free lance journalist. Executive Editor of American (more...)
Related Topic(s): Navy; Nuclear; Red Sea; Russia; Russian Tv; Sudan; Syria; Tartus, Add Tags
Add to My Group(s)
Go To Commenting
The views expressed herein are the sole responsibility of the author and do not necessarily reflect those of this website or its editors.