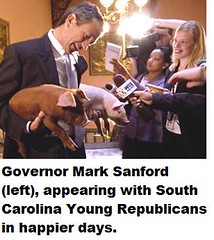 (Image by Unknown Owner)   Details   DMCA
Image by Mike Licht, NotionsCapital.com via Flickr South Carolina Gov. Mark Sanford on Wednesday became the first governor to reject some of his state's share of President Barack Obama's economic stimulus money, spurning $700 million that he said would harm his state's residents in the long run.

Recently it was reported that Governor Mark Sanford ran away with his mistress and no one could find him for awhile. The good Christian Governor asked for forgiveness and I suppose the good people of South Carolina could find it in their hearts to forgive him for Adultery and taking a leave of absence without notifying anyone.

But there is one thing a politician should not be forgiven.

And that is for being stupid.

For turning down money for his desperate state, Governor Sanford should have been impeached. Even the Republicans in his state knew that Sanford was stupid, or maybe even crazy, so they moved t o override his rejection of the Federal Stimulus money.

Sanford, proving that he is even more stupid than most people would give him credit for, decided to take the General Assembly to court to stop the acceptance of the stimulus money.

Maybe all of that chasing around with his mistress from Argentina was enough to make the Fundamentalist Christian Governor a little silly. But I think the record shows that he has always been stupid and for that there is not much God or man is going to do to help him.

Sanford should resign for being incapably ignorant. Not just because he showed bad judgment in leaving South Carolina in more capable hands while he was gone with his mistress, but because he is a fool.

The people should forgive just about anything a politician does, but being stupid is not one of them.

Related Topic(s): Economic; Judgment; Republican; Stimulus; Stupid White Men, Add Tags
Add to My Group(s)
Go To Commenting
The views expressed herein are the sole responsibility of the author and do not necessarily reflect those of this website or its editors.