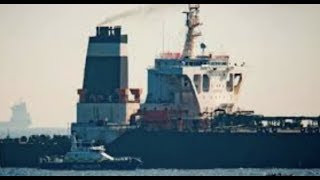 Britain's seizure of an Iranian supertanker carrying 2 million barrels of oil is an act of piracy and a major escalation in tensions that threaten to spiral out of control. It was carried out at the behest of the United States as part of the campaign of military provocations and economic sabotage against Tehran.

A detachment of nearly 30 British troops including Marines from 42 Commando raided the tanker, Grace 1, together with police from Gibraltar, the rocky outcrop seized by Britain following the War of the Spanish Succession under the 1713 Peace of Utrecht that is strategically placed to control access to the Mediterranean Sea.

The UK said it had seized the ship to prevent Iran breaching sanctions against Syria.

The military operation in the early hours of Thursday morning involved a descent by ropes from a Wildcat helicopter and boarding from a speedboat. Grace 1 was travelling through the strait of Gibraltar. It was identified by Lloyd's List as having begun its journey from Iran and was controlled by Russian Titan Shipping, a subsidiary of TNC Gulf in Dubai. Iran has since declared ownership.

Lloyds List says it is the first tanker carrying Iranian oil to head for Europe this year. It represents a significant loss to a country hit by comprehensive US sanctions and more targeted economic penalties by the European Union. In April 2018, Iran shipped 2.5 million barrels per day, which fell to around 300,000 barrels per day in June this year, according to Al Jazeera. Other sources claim that Iran is now exporting only 200,000 bpd and needs to ship at least 600,000 to avoid economic meltdown.

Tehran responded by summoning Britain's ambassador to its foreign ministry to explain what it described as an "illegal seizure." An Iranian statement "called for the immediate release of the oil tanker, given that it has been seized at the request of the US, based on the information currently available."

The most significant comment came from Mohsen Rezai, a former head of Iran's Revolutionary Guard and a member of a council that advises the Supreme Leader, Ayatollah Khamenei. He said Iran would respond to bullies "without hesitation." He warned in a tweet, "If Britain does not release the Iranian oil tanker, it is the authorities' duty to seize a British oil tanker."

UK Ambassador Rob Macaire reiterated the British position that the vessel had been seized at the request of the "Gibraltarian authorities to enforce sanctions against the regime of Bashar al-Assad." The Ministry of Defense also insisted that British troops acted under the direction of the Gibraltar police.

Fabian Picardo, Gibraltar's chief minister, added that "we have reason to believe that the Grace 1 was carrying its shipment of crude oil to the Banyas refinery in Syria ... the property of an entity that is subject to European Union sanctions against Syria."

This is both a transparent and stupid lie. Gibraltar, population 30,000 plus, is as capable of acting independently as a mouse in a cage.

Spain's acting foreign minister, Josep Borrell, said Gibraltar had seized Grace 1 in response to a request from the US to Britain. El Pais reported that Borrell, from the Socialist Party (PSOE) said the US intelligence implied that the supertanker was in British territorial waters. Madrid will now formally complain of a British incursion into Spanish waters, with Borrell, the EU's nominee for High Representative for Foreign Affairs and Security Policy, stating, "We are analyzing the circumstances and seeing how they affect our sovereignty."

Donald Trump's national security adviser, John Bolton, tweeted, "Excellent news: UK has detained the supertanker Grace I laden with Iranian oil bound for Syria in violation of EU sanctions. America & our allies will continue to prevent regimes in Tehran & Damascus from profiting off this illicit trade."

It is difficult to gauge how significant the UK/Spanish row is, given the constant tensions over Gibraltar and the degree to which Spain would ever wish to clash with the US. Moreover, a Spanish diplomatic source said, "Spain didn't want to interfere because the issue was compliance with European Union sanctions."

Chris Marsden's work can be found on wsws.org, a website dedicated to global awareness of socialist issues & which serves as the forum for the International Committee of the Fourth International (ICFI).
Related Topic(s): Economic; Iranian; Iranian Navy; Oil; Provocation; Royal Marines; Sanctions; Uranium, Add Tags
Add to My Group(s)
Go To Commenting
The views expressed herein are the sole responsibility of the author and do not necessarily reflect those of this website or its editors.