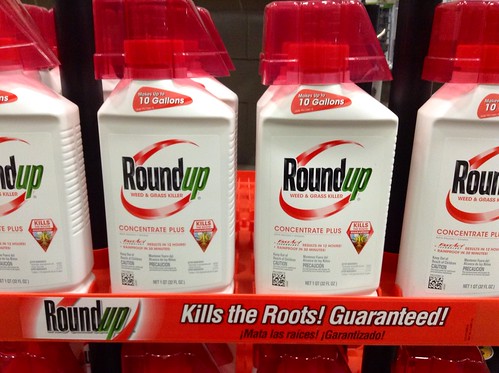 Three years ago scientists published a paper revealing ways in which glyphosate, the active ingredient in Roundup(R), impacts physiology through its effects on manganese, an important but often overlooked nutrient. We are told that humans are not affected by glyphosate. In fact we are, and the array of glyphosate's effects is spectral and chilling. The paper was published in the journal Surgery Neurology International. Because the article might be hard slogging for people not trained in physiology, I summarize its main points here. I encourage anyone who wishes more detail to refer to the paper itself.

Roundup is the most widely used herbicide on the planet. In the 30 years between its introduction in 1974 and 2014, its use in the US increased by more than 250 percent. Since 1996, two years after the first genetically modified crops quietly hit the market, use of Roundup worldwide has risen fifteenfold. Corn, soy, canola, cotton, alfalfa, and sugar beets have been genetically engineered to be "Roundup-ready" and so can tolerate glyphosate, the active ingredient in Roundup, to control weeds. Weeds exposed to glyphosate are becoming increasingly resistant to the herbicide, so despite early assurances that glyphosate use would shrink with use of GE crops, the opposite has come to pass. Along with increasing use of glyphosate-resistant crops, by 2001 Roundup was the most-used herbicide in the US and its use has increased steadily ever since. Farmers over the world now apply nearly five billion pounds (over two billion kilograms) of glyphosate to their crops each year. In addition, it has become common if unacknowledged in the US to spray such crops as wheat with glyphosate just before harvest. Glyphosate collapses cellular walls in the plants, drying them for ease of harvest and leaving herbicide residues on the crop. Glyphosate kills by disrupting the biological pathway in plants called the shikimate pathway.

In 1993 few people had detectable levels of glyphosate in their urine. By 2016, 70% of people showed detectable levels. Meanwhile, diagnoses of celiac disease with its intolerance of the wheat protein gluten skyrocket. Celiac patients are more at risk for cancer and particularly non-Hodgkin's lymphoma, a cancer that has been linked to glyphosate. But because we lack the shikimate pathway glyphosate is allegedly nontoxic to humans, and government regulators appear unperturbed by steadily rising residues in food, water, wildlife, and humans.

Not everyone is so sanguine. In 2012 a publication identified several ways that EU regulators undervalue potential toxic effects of glyphosate, including using animal studies of glyphosate that were too short or that included too few animals to achieve statistical significance, disregarding studies with exposures higher than what was expected in food, and preferring studies of pure glyphosate over those using glyphosate in combination with metabolites and other 'impure' formulations, even though formulations are more likely to occur in the real world and in fact may be vastly more toxic than glyphosate alone. Adjuvants in pesticides and herbicides greatly enhance toxicity of the active ingredient; that's why they're included. One researcher posits that Roundup is 125 times more toxic than isolated glyphosate. EU regulators also seem unaware that endocrine-disrupting chemicals such as glyphosate may have more acute effects at very low doses than at higher doses.

Because the industry deems three months sufficient to test for toxicity in rodents, no industry-compliant study has run longer. When an errant study did assess life-long effects of genetically modified, Roundup-ready corn and soy feed on rats, females had mammary tumors, males had kidney and liver damage, and all had shortened lives. Although this article was later retracted by the publishing journal (although it has since been republished in Environmental Sciences Europe), it's worth noting that these effects, occurring in response to Roundup and GM food alone, were not apparent before four months.

We have been told that glyphosate does not affect us because mammals lack the shikimate pathway. We have also heard tales of Roundup-engendered wrongs. If Roundup is hurting us, the question is how.

Our bodies house between two and five pounds of bacteria, much of it in the microbiome of the gut. The bacterial load we carry is 10 times the number of cells that house us. We are becoming increasingly aware of the pertinence of this cargo. While our genes can be blamed for about 10% of diseases that afflict us, 90% of disease occurs through simple exposure. Exposure is not inevitability, however. Our microbiome affects which exposures pierce our defenses, as microbes in their presence or absence activate or inactivate genes. Gut bacteria and plants we eat provide us with such essential amino acids as tryptophan, tyrosine, and phenylalanine. Body weight responds to the microbiome; lab animals deprived of four species (Lactobacillus, Allobaculum, Rikenellacea, and Candidatus arthromitus) grow obese. Exposure goes both ways and affects the microbiome, swiftly changing its contents for better or worse. We may not be precisely what we eat, but we are touched.

Our microbiome is not limited to digestion and immunity. The vagus, the longest nerve in the body, links gut to brain and is heavily implicated in mood and memory. Rats with an intact vagus find their way out of captivity along escape routes previously used while identically trained rats with a blocked vagus remain captive. (Although just one specific aspect of memory, that which locates objects, appears impaired, this finding could impact medical treatments, such as FDA-approved vBloc for weight loss, involving the vagus nerve.) Microbiomes of children with autism differ markedly from those of healthy children. Impaired gut health has been linked to neurological dysfunction, mood disorders, and degenerative brain disorders. Microbes help to maintain the 'gut barrier' analogous to the 'blood-brain barrier' so that foreign substances do not enter blood or brain uninvited.

What we eat has more effect on our colonic inhabitants than do our genes. Good and bad bacteria both populate our intestines but in health the good predominate. The 'typical' Western fast-food diet of highly processed, pesticide-contaminated, chemical-infused, nutrient-scant food tips the balance toward bad bacteria. What determines bacterial character? 'Good' bacteria are those that, while subsisting on what we eat, remain situated in the colon while broadcasting into it healthful metabolites from that diet that help prevent obesity, diabetes, and heart problems. 'Bad' bacteria are not content with a healthful diet, so in search of more suitable fare they invade the cells that line the colon; here is one source of 'leaky gut'. Their invasion of the liner cells of the colon alerts the immune system, which responds with inflammation. Inflammation is a good way to combat invaders in the short term, but when it lingers too long it causes stress, as with soldiers burned out after living long on high alert. Like vampires, bad bacteria can also turn what were once nutrients into usurpers that sow discord.

As do plants, bacteria contain the shikimate pathway. Glyphosate targets that pathway, and gut bacteria exposed to glyphosate and lacking defenses against it shrivel like poisoned plants. Even as it incapacitates swathes of our bacteria, glyphosate impairs production of such essential amino acids as methionine and glycine. Glycine is a common amino acid that the body uses to make proteins. In chemical reactions involving glycine, glyphosate, of similar chemical (and semantic) construction, slyly inserts itself into the process. Glyphosate mimics glycine in the body, replacing it in chemical actions. Substitution of one substance for another in metabolism will have effects. Proteins produced by the impostor are not normal and the range of functions affected is wide.

Other metabolites of a functioning shikimate pathway are required as precursors for such biologically vital molecules as serotonin, melatonin, melanin, epinephrine, dopamine, thyroid hormone, folate, coenzyme Q10, vitamin K, and vitamin E. Without the shikimate pathway and shikimate-containing plants functioning inside us these essential substances are simply not produced. Our guts team with microbes, and glyphosate is a patented antimicrobial.

Although its effects on microbes are grave enough, glyphosate's effects on us mammals do not stop there. Another of glyphosate's actions is to chelate metals so that they're inaccessible, which in plants stunts growth and in mammals opens a Pandora's box of issues. Metal chelation inactivates the cytochrome P450 or CYP enzymes, greatly reducing the liver's ability to defuse toxic invaders; rats exposed to Roundup have half the CYP enzymes as controls, and it is notable that people with celiac disease tend to have diminished activity of CYP enzymes. Glyphosate interferes as well with enzymes that produce heme, an iron-containing pigment that gives blood its color and is an ingredient of hemoglobin. (To function properly defusing toxic substances, P450 and CYP enzymes also must contain heme.) Hemoglobin, a protein in red-blood cells, carries iron and distributes oxygen. The pigment porphyrin is normally kept in check as it contributes to making heme, but when something such as chelation prevents heme from being synthesized, unused porphyrin builds to toxic levels. The disorders that result are called porphyrias from the Greek word for purple, variations in the disorder stemming from the enzymes affected. Hampered heme synthesis (and urinary excretion of heme precursors) is linked with autism. Not only exposure to toxicants, but impaired ability to neutralize them, may contribute to autism.

Related Topic(s): Autism; Diet; Effect; Food; Glyphosate; Health; MEMORY; Plants; Toxicity; Wheat, Add Tags
Add to My Group(s)
Go To Commenting
The views expressed herein are the sole responsibility of the author and do not necessarily reflect those of this website or its editors.