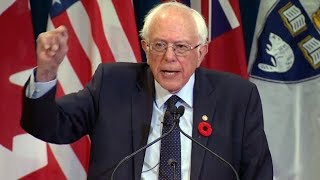 Politics is not a baseball game, and it is not a soap opera.

People are hurting in this country, and our job is not to be distracted by political gossip and Donald Trump's tweets. Our job is to revitalize American democracy and bring millions of people into the political process who today do not vote and who do not believe that government is relevant to their lives. Our job is to create an economy and government that works for all of us, not just the 1 percent and wealthy campaign contributors.

Here's the problem: the strategy the Democratic Party has been pursuing in recent years has failed. Since 2009, Democrats have lost more than 1,000 seats in state legislatures across the country. Republicans now control the White House, 34 out of 50 governorships as well as the U.S. House of Representatives and the U.S. Senate. In dozens of states, the Democratic Party is virtually non-existent.

Too much is at stake for our country and our people for us not to learn from our past failures and move forward in a way that makes the Democratic Party stronger so we can take on and beat Trump and the right-wing Republican agenda.

What the recently released book excerpt from former interim DNC Chair Donna Brazile made clear is that unless we get our act together, we are not going to be effective in either taking on Donald Trump or in stopping the extremist right-wing Republican agenda. We have to re-establish faith with the American people that in fact we can make positive changes in this country through a fair and transparent political process that reflects the will of voters across this country.

And we need to make it abundantly clear that the Democratic Party is prepared to take on the ideology of the Koch brothers and the billionaire class -- a small group of people who are undermining American democracy and moving this country into an oligarchic form of society. YES. We will take on the greed, recklessness and illegal behavior of Wall Street, corporate America, the insurance industry, the drug companies, and the fossil fuel industry.

Now, what the Establishment (political, economic and media) wants us to believe is that real and fundamental changes in our society are impossible.

No. We cannot guarantee health care to all as a right. No. We cannot revitalize the trade union movement, raise the minimum wage to a living wage of $15 an hour and provide pay equity for women. No. We cannot effectively compete in the global economy by making public colleges and universities tuition-free. No. We cannot lead the world in combatting climate change and transforming our energy system away from fossil fuels. No. We cannot reform our broken criminal justice system or finally achieve comprehensive immigration reform.

They want us to think that in the wealthiest country in the history of the world, a nation which has more income and wealth inequality than almost any nation on earth, the best that we can do is to accept tiny, incremental change.

I could not disagree more.

Right now, a Democratic National Committee Unity Reform Commission, comprised of people who supported our campaign, people who supported Secretary Clinton's campaign, and people appointed by DNC Chair Tom Perez are working on a set of policies that will determine the future direction of the Democratic Party. In many ways, this Unity Commission will determine whether the Party goes forward in a dynamic and inclusive way, or whether it retains the failed status quo approach of recent years. It will determine whether the Party will have the grassroots energy to effectively take on Donald Trump, the Republican Party and their reactionary agenda or whether we remain in the minority.

In my view, this Commission must:

** Make the Democratic Party more democratic and the presidential contests more fair by dramatically reducing the number of superdelegates who participate in the nominating process. It is absurd that in the last presidential primary over 700 superdelegates (almost one-third of the delegates a candidate needed to win the nomination) had the power to ignore the will of the people who voted in the state primaries and caucuses.

** Make primaries more open by ending the absurdity of closed primary systems with antiquated, arbitrary and discriminatory voter registration laws. Republicans are the ones who make it harder for people to vote, not Democrats. At a time when more and more people consider themselves to be Independents our job is to bring people into the Democratic Party process, not exclude them. It is incredibly undemocratic that in some states voters must declare their party affiliation up to six months before the primary election.

** Make it easier for working people and students to participate in state caucuses. While there is much to be said for bringing people together face-to-face in a caucus to discuss why they support the candidate of their choice, not everybody is able to attend those caucuses at the time they are held. A process must be developed that gives everyone the right to cast a vote even if they are not physically able to attend a state caucus.

Related Topic(s): Democracy; Democratic National Committee; Democratic Values; Economy; GrassRoots; Ideology; Party Politics Democratic; Reform, Add Tags
Add to My Group(s)
Go To Commenting
The views expressed herein are the sole responsibility of the author and do not necessarily reflect those of this website or its editors.