In the light of the current outrages committed by Trump (the embassy relocation/provocation) and Netanyahu (the Gaza massacres), it seems to me appropriate to republish a column that I first posted on The Greanville Post in 2011. And so, here 'tis:

Henry Siegman is a former President of the Synagogue Council of America and the American Jewish Congress, and served on the executive committee of the American Israel Public Affairs Committee (AIPAC) for nearly thirty years, from 1965 to 1994.

Rabbi Siegman recently published a lengthy column on the Israel-Palestine conflict in the June 11th edition of The Nation titled, "Can Obama Beat the Israel Lobby?" In it Rabbi Siegman held that an understanding of the current state of affairs dealing with the conflict must begin with an understanding that the current government of Israel has absolutely no interest in negotiating with the Palestinians, never has and never will. I was fascinated to read Rabbi Siegman's lengthy column, for it supports a view that I have long held. Rabbi Siegman presents very convincing evidence for the position, including the fact that most Israelis, of whatever political persuasion, agree with it.

Benjamin Netanyahu, Argh! This one says it all (except how personally corrupt he is).
(Image by DonkeyHotey)   Details   DMCA

In Israeli governments, this stance goes back to that of Yitzhak Shamir. Shamir was the Prime Minister after Menachim Begun, who had, under intense US pressure from the Carter Administration, negotiated the peace settlement with Egypt (but not the Palestinians). Shamir, a former leader of the "Stern Gang," and right-wing-zionist terrorist organization formed during World War II to fight the British, famously said that he just loved negotiations. Just as long as they went on and on and never came to any conclusions. (Begun was actually the first former right-wing-zionist terrorist to become Prime Minister of Israel. He was a former leader of Irgun, a larger and better organized group than the Stern Gang, from which the latter had split when it felt that Irgun was not radically anti-British enough.) Succeeding Shamir in 1992 was Yitzhak Rabin, a former Chief-of-Staff of the Israel Defense Force. Rabin had come to be firmly in favor of a negotiated settlement. In 1995 he was assassinated by a far-rightist Israeli. Negotiations, at that time based on a document called the "Oslo Accords" (in which the border between the two proposed countries was effectively to be the "Green Line" of 1967), came to a halt.

They were re-started at the end of the term of President Bill Clinton, with the last center-left Israeli Prime Minister, Ehud Barak. The ended with a resounding thud at the end of the Clinton Presidency. Just who was or were responsible for the collapse remains unclear to this day. But Ariel Sharon had been elected Prime Minister and he was totally opposed to any meaningful negotiations. Under the Presidency of George W. Bush he had nothing to worry about. But worry he did, so much so that whenever there seemed to be slight step forward being taken, somehow there would be a terrorist incident or two. There was not just one voice inside Israel, including an occasional member of the Knesset (Parliament), who thought that at least on some occasions these happenings were not coincidental (agents provocateurs, anyone?)

With the rise to power of Benyamin Netanyahu, guessing games about whether the Right-Wing Israeli government is interested in seriously negotiating or, as Rabbi Siegman firmly says, they are not, are no longer necessary. Netanyahu's Foreign Secretary, a former Russian (and quite secular) Jew, openly talks about expulsion, not only of the Palestinians from the Occupied Territories, but also of Arab Israeli citizens from the State of Israel. The day before Netanyahu most recently met with President Obama, the Deputy Speaker of the Knesset and a prominent Likudnik, Danny Danon, said, in an Op-Ed published in The New York Times (May 19, 2011) that Israel should simply go ahead and annex the Occupied Territories. Shortly thereafter, Netanyahu refused to meet in Israel with a visiting delegation from the US Congress organized by J-Street, the pro-peace US liberal Jewish lobbying organization. "Just don't want to talk about negotiatin,' no way, no how, donchaknow."

Then there is the whole moving the goalposts gambit, like the bunch of right-wing Israeli government pre-conditions that is now so large that it includes the prior recognition of Israel not just as a state (which Saudi Arabia voluntarily agreed to in 2002 in a peace initiative totally ignored by their oil-soul-mates in the White House as well as Israel, of course) but as a Jewish state. And further: Hamas would not be allowed at any negotiating table (even though they are the elected representatives of the Gazan population and some respected authorities think that their "we don't recognize Israel" position [actually not held by all of its leadership] is nothing but a bargaining chip, of which they have precious few others); a discussion of Palestinian repatriation could not be on the agenda either, even though the leading Palestinian negotiator, Saeb Erekat, has, since the draft peace settlement "Geneva Accords", negotiated by himself and former center-left Israeli government Cabinet Minister Yossi Beilin in 2004, accepted a token 50,000 as his negotiating starting point.

And so the question arises, "Why?" Why is the Israeli Right so opposed to a settlement with the Palestinians based on a two-state solution, with the Palestinian state being demilitarized and Israel having some kind of military presence along the Palestinian portion of the River Jordan? This is a question that does not often arise in discussions of the Israel/Palestine conflict, but to my mind it is the central one. For it explains why there will never be a settlement until either the Israeli people replace the governing Right-Far Right coalition or the United States forces a settlement down its throat, as suggested in the article by Rabbi Siegman.

1. In the Woody Allen movie Sleeper, when he awakens from a (very) deep sleep after the end of a catastrophic world war and is asked what started it, he replies, "well, there was a man named Albert Shanker." A man named Ze'ev Jabotinsky is the one who started it for Israel/Palestine. He was a right-wing Zionist who in the 1920s laid down the dictum that that long-range solution for what would become Israel was to establish a state within what has been held for millennia to be the boundaries of "The Land of Israel" "granted to the Jews" "by God." Questions of logic, history, and legality do not figure into this configuration for a modern State of Israel. For Jabotinsky the solution to the problem of the Arab peoples living there was a simple one: expulsion. In the 1930s, David Ben Gurion, the future first Prime Minister of Israel referred to Jabotinsky as the "Jewish Hitler." Netanyahu's father was a secretary to Jabotinsky. Ariel Sharon's parents were close associates of his, and Begun's Irgun was strongly influenced by him. At the time of the UN-sponsored Partition of the British Palestinian Mandate into Jewish and Arab sectors in 1947, the one-third of the Jewish Agency that represented the Jabotinskyites voted against accepting it. So Jabotinsky's, "'The Land of Israel' is ours and no one else's regardless of who else happens to be living there perhaps for quite some time," position has been at the center of the political ideology of all of the generations of the Israeli Right. Of course, presently it is convenient for the Israeli Right to have the support of a strong branch of the US Republican Christian Right which also supports the creation of the modern "Land of Israel," but for different reasons than those held by any Israelis. 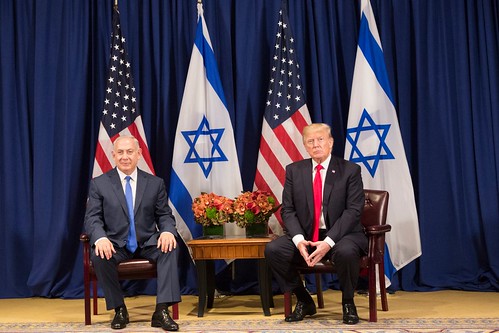 2. Likud and its right-wing coalition partners know that if a GOPer wins the Presidency in 2012 they won't have anything to worry for quite some additional time. So stalling now is a very good idea for them.

3. If a settlement were to be arrived at, Israel would face the very real possibility of the outbreak of some kind of civil war. A significant proportion of the settlers are not Israelis but in fact right-wing American Jewish e'migre's, often Orthodox. The biblical, "Land of Israel" story (which of course has no relevance to present day reality) is in their blood and they might very well be willing to spill quite a bit of the latter to defend the former. A right-wing Israeli government, built partially on the backs of the settlers, would have a very hard time opposing them, especially with force.

4. Finally, and this may be the key point, if there were a comprehensive settlement, with the establishment of a Palestinian state, the Israeli Right would likely become politically irrelevant. To administer a country finally at peace after decades of wars, pseudo-wars, and threats of war, almost certainly a new Center-Left coalition, with strong representation from the Arab-Israelis, would be voted into power. And then where would that leave the wealthy in a country which is rapidly approaching the United States in the rich/everyone-else split? Where would that leave the Israeli arms industry? Where would that leave the Israeli Defense Force and Mossad? Where would that leave the tiny religious parties and their outsized influence on social policy in return for their few votes in the Knesset that puts Likud over the top? Not good for their side, one should think. The day before the May 20, 2011 Obama-Netanyahu meeting, an ad in The New York Times signed by 100 Israelis, high-ranking former military and Mossad commanders, numerous winners of the Israel Prize, and a number of other well-known political and academic leaders, sponsored by J-Street, was headed, "Act Now: To Achieve a Two-State Solution," based on the 1967 borders. That in itself does not bode well for the Israeli Right, should peace ever be achieved.

It would appear that if there is to be political movement on the issue of true negotiations, attention will have to be paid to these concerns, both within the United States and within Israel.

Steven Jonas, MD, MPH, MS is a Professor Emeritus of Preventive Medicine at StonyBrookMedicine (NY) and author/co-author/editor/co-editor of over 35 books. In addition to his position on OpEdNews as a "Trusted Author," he is a Senior Editor, (more...)
Related Topic(s): Benjamin Netanyahu; Gaza Massacre; Government Criminals; Israel Attacks Gaza; Israeli Attacks On Gaza; Israeli Apartheid; Israeli Intransigence; Israeli Pressure On US; Israeli Racism; Israeli-palestinian; (more...) J-Street; Jabotinsky; Likud; Trump Israel; Us Embassy Jerusalem; War On Gaza, Add Tags  (less...)
Add to My Group(s)
Go To Commenting
The views expressed herein are the sole responsibility of the author and do not necessarily reflect those of this website or its editors.