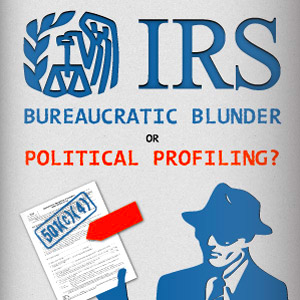 IRS Commissioner John Koskinen was forced to testify on Wednesday before a Republican impeachment committee. Republicans are doing this because the IRS (under a previous commissioner) dared to check whether organizations applying for special IRS nonprofit status were following the law or illegally promoting candidates.

Republicans in Congress want to send the IRS and other government agencies a clear message: If government employees try to make corporate/conservative movement organizations follow the laws and rules, Republicans will make their lives miserable, bankrupt them and ruin their careers. And thanks to the huge sums of "dark" money flowing to Republican candidates from billionaires and corporations, they have the power to do it.

There has been a big brouhaha over the IRS "targeting" conservative groups. Here is what actually happened: The IRS looked at a number of organizations -- both conservative and not -- applying for nonprofit status to see if they were engaged in a level of political activity that would make them ineligible. The IRS asked questions to find out if they were really legitimate nonprofits or instead were primarily political organizations.

That's it. That's what happened. The propaganda word "targeted" is used to make it appear something sinister was done but nothing actually happened to any of these organizations. They were not kept from raising money while the IRS considered whether to grant them charity status. The organizations were not, in the end, denied charity status (thanks to Republican intimidation of the agency). No one was "audited." Nothing. Nada.

It is the job of the IRS to look at whether groups applying for nonprofit status are actually political operations in disguise. The IRS' crime was including "conservative" organizations among those checked. (Never mind that groups labeling themselves "conservative" clearly implies they have a political mission.)

Corporations and conservative billionaires have been channeling "dark" money into Republican politics using these nonprofits as front groups, in order to keep the sources of this money from the public. For example, Karl Rove's Crossroads GPS has registered itself with the IRS as a 501(c)(4) "social welfare" organization so it does not have to disclose its donors. It spent $145 million on TV campaign ads promoting Republican candidates in 2012 without the pubic learning who paid for those ads.

Michael McAuliff reported on this in 2014 at The Huffington Post, in "Republican Outrage At IRS Is All About Protecting Karl Rove, Dark Money, Dems Say":

"While Republicans expressed outrage that Lerner would be interested in denying Crossroads its tax breaks, the watchdogs who filed many of the complaints, the Campaign Legal Center and Democracy 21, say she was simply doing her job. They point to an opinion by lawyers at the Federal Election Commission who deemed Crossroads to be a political organization. (The FEC is evenly divided between Republicans and Democrats, and they have deadlocked over taking action on the lawyers' recommendation.)

"Still, if Lerner was 'targeting' Crossroads, then so was the FEC, which got a formal complaint about the group from Public Citizen, said CLC senior counsel Paul S. Ryan in an interview with The Huffington Post.

"'One of the things that really struck me as odd is that Republicans on the Ways and Means Committee were critical of Lois Lerner for looking at Crossroads GPS as if that were a bad thing, when in my opinion, that is her job,' Ryan said."

Related Topic(s): Federal Agency IRS; Republican; Republican Hypocrisy, Add Tags
Add to My Group(s)
Go To Commenting
The views expressed herein are the sole responsibility of the author and do not necessarily reflect those of this website or its editors.