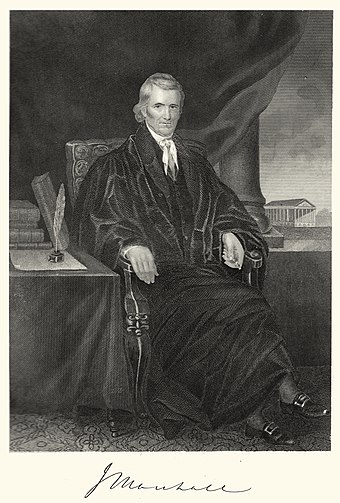 Chief Justice John Marshall. The man who knit together the structure of the Supreme Court as we know it, out of whole cloth: opednews.com/articles/Let-s-Hear-it-for-Original-by-Steven-Jonas-Confirmation_Congress_Fascism_Government-200922-612.html
(Image by Wikipedia (commons.wikimedia.org), Author: Alonzo Chappel  (1828–1887)   )   Details   Source   DMCA

Supreme Court Justice Oliver Wendell Holmes, in referring to the limits on freedom of speech under the first Amendment to the Constitution, famously said words to the effect of "You cannot cry 'fire' in a crowded theater and have that count as 'free speech'."

Very late at night on November 26, 2020, the U.S. Supreme Court, in "Roman Catholic Diocese of Brooklyn, NY v. A. Cuomo, Gov. N.Y.," ruled 5 to 4 that public health rules adopted by the State to help control the rampaging pandemic (that is the "Trumpidemic2020©") could not be applied to the Diocese and to a Jewish congregation that had also joined the suit, because of the "free exercise of religion" clause of the First Amendment to the Constitution. As Justice Gorsuch said, in one of the concurring opinions (the majority opinion was not signed --- is Justice Barrett being shy?),

"Even if the Constitution has taken a holiday during this pandemic, it cannot become a sabbatical. Rather than apply a nonbinding and expired concurrence from South Bay [an earlier case in which public health measures as applied to religious institutions were upheld], courts must resume applying the Free Exercise Clause. Today, a majority of the court makes this plain. We may not shelter in place when the Constitution is under attack. Things never go well when we do."

"Justices of this court play a deadly game in second-guessing the expert judgment of health officials about the environments in which a contagious virus, now infecting a million Americans each week, spreads most easily." ("Deadly" indeed.)

Indeed. For infectious diseases transmitted through the air, from person-to-person, large closely-knit (or even not so closely knit, because the behavior of every single member cannot be effectively monitored) gatherings endanger the health of those gathered as well as of persons with whom those present may subsequently come in contact. Numerous public health studies have proven this fact over many decades. Exempting large gatherings of religious folk from COVID-19 restrictions that will protect the health of the public in general, so that the religious folk may express their religious feelings and devotion, is the same as allowing a religious congregation to go over to a public water supply access point and move their bowels into it, just as long as in so doing they are expressing their sincerely held religious beliefs and faith. And according to this ruling, that is exactly what they could do. For, as Justice Gorsuch said, "courts must apply the Free Exercise clause."

Well, let's take a look at that and a couple of other parts of the Constitution that may also be applicable. For example, the Preamble, that is the Statement of Purpose for which the whole document is designed, has this to say:

"We the people of the United States, in order to form a more per­fect Union, establish justice, insure domestic tranquility, provide for the com­mon defence, promote the general welfare, and secure the blessings of liberty to ourselves and our posterity, do ordain and establish this Consti­tution for the United States of America."

Hmm. Allowing a religious congregation to engage in behaviors that the public health authorities of their State have determined might lead to the further spread of a very dangerous disease might be considered to be violative of domestic tranquility and contradictory to the general welfare, might they not?

And let's take a look at the other section of the First Amendment that deals with religion besides the "free exercise" clause: "Congress shall make no law respecting an establishment of religion . . ." Might not establishing a special exception for certain religious congregations that give them privileges that violate rules to promote the public health of the citizens of the be regarded as "establishing a religion" by giving them certain special privileges? Such as the freedom to move their bowels into a public water supply, if in so doing they would be sincerely expressing their religious faith?

Steven Jonas, MD, MPH, MS is a Professor Emeritus of Preventive Medicine at StonyBrookMedicine (NY) and author/co-author/editor/co-editor of over 35 books. In addition to his position on OpEdNews as a "Trusted Author," he is a Senior Editor, (more...)
Related Topic(s): ATHEIST; Abortion; Atheism; Freedom Of Expression; Freedom Of Religion; Freedom Of Religion; God; Jews; Non-believers; Pandemic; (more...) Plague; Religious Extremism; Religious Freedom; Religious Right; Sotomayor; Trump, Add Tags  (less...)
Add to My Group(s)
Go To Commenting
The views expressed herein are the sole responsibility of the author and do not necessarily reflect those of this website or its editors.