Rape as a weapon of conquest, control, punishment and humiliation has unfortunately been a hallmark of war in sub-Saharan Africa, but now we are seeing charges that it is being implemented by Gaddafi forces against the Libyan people, although this should not surprise anyone who has followed Colonel Gaddafi's support for warlords and dictators farther south over the years, men who have long used rape as a weapon against their foes, men such as his proteges Charles Taylor and Foday Sankoh in Liberia and Sierra Leone, respectively, to name a few.

Several doctors say they have found Viagra tablets and condoms in the pockets of dead pro-Gaddafi fighters, alleging that they were using rape as a weapon of war.

They say they have been treating female rape survivors who were allied with pro-democracy forces.

Furthermore, 175 people, including doctors, have been reported missing from Ajdabiya, and many have now been found to have been killed.

(Mosaic Video Alert: March 28, 2011) NBN reports on a new crime committed by Muammar Gaddafi and his regime: the rape of Iman al-Obeidi. The victim is a "lawyer who embodies the model Libyan woman, but bothered the regime for being a free woman." Iman was detained and raped by 15 of Gaddafi's mercenaries. The regime first accused al-Obeidi of being drunk and mentally ill, then offered to bribe the rape victim in exchange for her silence, a request that was rejected. Benghazi residents held a solidarity rally with Iman and online activists rallied behind her with a Facebook page entitled "We are all Iman al-Obeidi."

Excerpt from the Guardian UK: 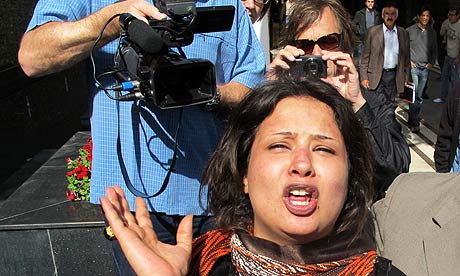 
Iman Al-Obeidi tries to tell her story to western media. Her parents say she is being held at Muammar Gaddafi's compound in Tripoli. Photograph: Mohamed Messara/EPA

The parents of a Libyan woman who said she had been raped by Muammar Gaddafi's troops say their daughter is being held hostage at the Libyan leader's compound in Tripoli.

I am a student of history, religion, exoteric and esoteric, the Humanities in general and a tempered advocate for the ultimate manifestation of peace, justice and the unity of humankind through self-realization and mutual respect, although I am not (more...)
Related Topic(s): Crime; Gaddafi Propaganda Machine; Gaddafi The Torturer; Leftist Support For Gaddafi; Libya; Libya Revolution; Muamar Al Gaddafi; Rape; Warfare Rape, Add Tags
Add to My Group(s)
Go To Commenting
The views expressed herein are the sole responsibility of the author and do not necessarily reflect those of this website or its editors.