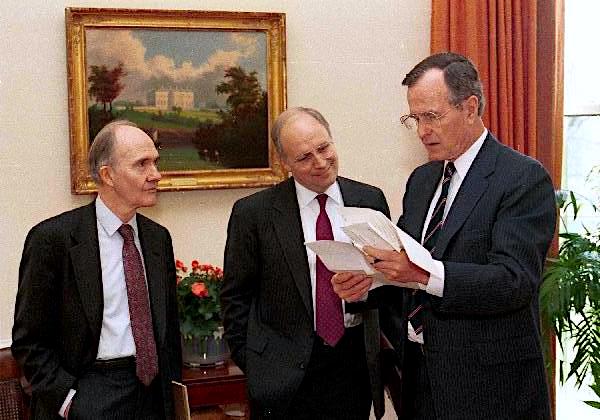 Some of the praise being accorded the late Brent Scowcroft is deserved. As national security adviser to President George H. W. Bush, the unassuming Scowcroft was a voice for relative reason and moderation (compared to the neoconservatives who would follow him), as the USSR imploded and U.S. forces chased Saddam Hussein out of Kuwait.

But few pundits commenting on Scowcroft's legacy are likely to raise an awkward, but important, question that haunts me. It is of such consequence that it belongs in his obituary -- and his eulogy. Scowcroft knew the attack on Iraq was not only a war crime but a reflection of insane hubris. Why didn't he join his voice to the 30 million people in 800 cities who demonstrated against the war on Feb. 15, 2003, five weeks before the invasion?

I believe Scowcroft badly served his friend George H. W. Bush on Iraq by not doing all he could to stop Bush's son from committing a war of aggression "the supreme international crime" as defined by the Nuremberg Tribunal.

Two years after the invasion, Scrowcroft told The New Yorker that Saddam Hussein "wasn't really a threat. His army was weak, and the country hadn't recovered from sanctions." Colleagues pointed out that although Scowcroft was chairman of George W. Bush's Foreign Intelligence Advisory Board, he was "frozen out" of planning for Iraq, as were Bush's secretary of state, James Baker, and others.

From the neocon viewpoint, it was essential to shut out anyone with practical, strategic, legal, or moral qualms about launching a pre-emptive war with nothing to pre-empt.

Scowcroft had had copious experience with "the crazies," the so-called "neoconservatives." They'd gained critical mass when Donald Rumsfeld and Dick Cheney ran President Gerald Ford's White House. Scowcroft had watched as Rumsfeld and Cheney maneuvered H. W. Bush into what they thought would be a dead-end job directing the CIA.

Then they sicced the crazies on Director Bush in the form of the infamous Team B, which did all it could to exaggerate the Soviet threat. I worked for DCI Bush in 1976; my colleagues and I did what we could to help him stave them off. In the end the Team B alarmists and their neocon descendants, "the crazies," got more of a hearing than they deserved.

When he became vice president, I gave Bush the early morning briefings based largely on the President's Daily Brief from 1981-85. He and I had an unusually long-standing professional and, later, cordial personal relationship. For several years after he left Washington, we stayed in touch mostly by letter/

On Jan. 11, 2003, as the invasion of Iraq was gaining steam, I wrote him a letter asking him to speak "privately to your son George about the crazies advising him on Iraq," adding, "I am aghast at the cavalier way in which the [Richard] Perles of the Pentagon are promoting the use of nuclear weapons as an acceptable option against Iraq."

"That such people have the President's ear is downright scary. I think he needs to know why you exercised such care to keep such folks at arms length. (And, as you may know, they are exerting unrelenting pressure on CIA analysts to come up with the 'right' answers. You know how that goes!)"

His reassuring answer not to worry about any influence the "crazies" might have on his son was a big letdown.

Ray McGovern works with Tell the Word, the publishing arm of the ecumenical Church of the Saviour in inner-city Washington. He was an Army infantry/intelligence officer and then a CIA analyst for 27 years, and is now on the Steering Group of Veteran Intelligence Professionals for Sanity (VIPS). His (more...)
Related Topic(s): Bush; Condoleezza Rice; Crazies; Iraq War; Neoconservatives; Ray McGovern; Scowcroft-Brent, Add Tags
Add to My Group(s)
Go To Commenting
The views expressed herein are the sole responsibility of the author and do not necessarily reflect those of this website or its editors.