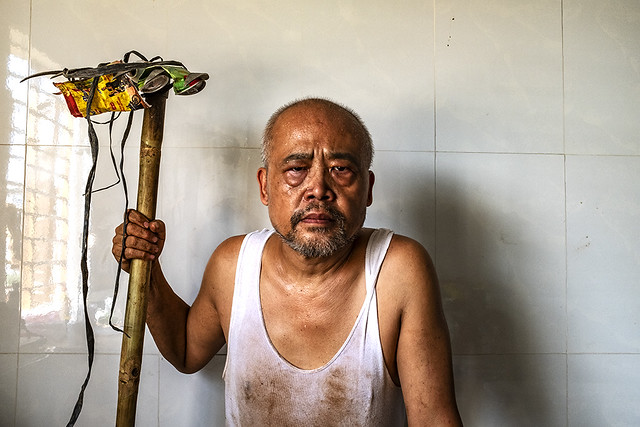 There is a dearth of writing about work, its variety, tedium and grind. This is understandable, since most writers have devoted much of their time to writing and reading, and not painting houses, cleaning toilets, washing dishes, planting crops or performing mind numbingly monotonous tasks on an assembly line, etc. This blind spot or ignorance has become worse in contemporary America, where your typical writer spends nearly his entire adulthood inside academia. There is no more surreal theme park than a college campus.

During my few cameo appearances as a university professor, I'd encourage students to write about their work experiences, especially if they appear pointless, for this in itself is meaningful, as hard as it is to believe as you're flipping endless beef patties, with burnt marks on your fingers, grease in your hair and sweat on your face, dreaming of sleep.

I'm typing this during stolen moments while working at a plastic recycling plant. Our grinding machine is chopping sorted yellow plastic into bits. Its loud, constant roar is a muscular, minimalist music that's punctuated by the sure hacking of our steadfast women, who must remove metal from plastic, separate all the colors. Heliophobic and stench adverse, most have their faces well-covered, lest they darken or sniff something too foul or even toxic. Among the plastic garbage are not quite empty bottles of insecticides or weed killers, with one advertised as having the "Strength of a German tank"!

The worst funk, though, comes from jars or bottles of fermented shrimp paste. Even when fresh and delicious, this purplish delicacy already smells like garbage. It can hearten, complicate and anchor a broth, or be mixed with lime juice and chili pepper to serve as a dip for boiled meat. Our puppy, though, likes it fine raw, as fished from our many tons of plastic trash, and it's useless to chastise Lou for her bad taste or derelict table manners.

With its iron stomach, a dog will lap up dish water or even eat sh*t. Last time I checked, I wasn't a dog. While sorting through some plastic garbage yesterday, I touched something that looked, smelled and felt exactly like sh*t, but maybe it wasn't, I optimistically hoped. At least I didn't have to eat it.

As a house and office cleaner for several years, I'm not unfamiliar with that malodorous purview. I've written in a poem, "Belonging to the lower class, you're expected / To cater to the upper class' lower bodily functions, / Not to engage their minds but to wipe their asses, / Kiss their cunts on demand, suck cocks for tips."

The lower you're on the ladder, the more buttocks you have to stare up at, the more sh*t you must deal with, the more unpleasantness you're forced swallow, and this goes for entire societies, and that's why plastic recycling is only feasible in a poorer country like Vietnam.

Our sorters work at their own pace and, to leaven their days, chatter and joke, so you'll hear laughter episodically, for felicitous language is the cheapest entertainment. Visiting large factories, I've witnessed assembly lines and isolated workstations where humans functioned like machines, but that's the whole point. Their mind is supposed to be blank, and their spirit snuffed out, so there is nothing left but the task. They can't slow down or even speed up. Just do it! I'm glad we're more primitive.

Repeatedly overburdened by loads beyond their stature and calling, some men quit, sometimes after mere days, though most are way tougher than their size suggests. This place stinks. A young man throws up, a woman must lie down and well tucked metal shards will cut through rubber sandals and draw blood, but days will go by uneventfully, tediously, as folks soldier on, waiting for pay day.

We bring nearly three tons of plastic garbage a day, so we swim and wade through the stuff. Trash, we live garbage, with a smile.

Though the oldest at our plant at 55, I'm the foreman, so don't have to bust my ass like the others. Still, it's a half marathon. A constant sweater, I rehydrate myself with Zero Degree iced tea, hot matcha tea or an ungodly concoction of hot water, spicy instant noodle seasoning and soy sauce. Though obviously nutrition-free, this broth yields a jolt of energy, or at least quickens my senses, thus lessening fatigue.

One of our strongest workers likes to reward himself with plenty of beer or rice wine after work, but Diep has missed two days already this week, so should be fired tomorrow. It's unfortunate, since I've drank and eaten with this guy, and find his conversations alert and funny.

Many among us get togethe r to feast, get drunk, joke, share stories and sing songs of love and loss going back half a century. With a shared heritage, our lives have meanings, and that's why we work, not just to eat. A poet may leave us with just one memorable phrase, but that's enough, and he should do at least that. Often, there's a woman who takes pride in outdrinking any man.

Diep reminds me of a Philly friend, Jay, for not only would they drink themselves out of a job, but they're both good looking enough to expect someone to accommodate them always, so if a door should close, another must soon open. They imagine life to be an endless series of open legs. It is rare to be blessed with such a curse. For such a man, even pussies can get tiresome.

Jay was my housemate for a year, and we were on the same housepainting crew. In the morning, we'd leave the house together, but once, Jay lagged behind on the walk to the bus stop, so missed the bus, and was fired.

Related Topic(s): Vietnam; Work, Add Tags
Add to My Group(s)
Go To Commenting
The views expressed herein are the sole responsibility of the author and do not necessarily reflect those of this website or its editors.