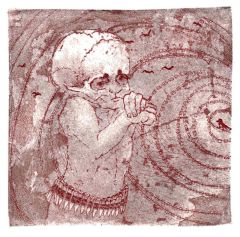 At the Razor's Edge of Homeland Security
(Image by Akemi Ohira)   Details   DMCA
Long before pretend tycoons, historical Fascists excelled in, divide and conquer the populace by conveniently identifying common enemies, to distract from political coercion, power lust and financial plunder - keeping all yearning to breathe free of fear vulnerable, and doomed to, What is Past is Prologue.

The Department of Justice policy regarding indicting a sitting President, while based on time honored memos from the Office of Legal Counsel, is not the law of the land. Indeed, our Constitution remains mute on whether a president can face criminal prosecution in court, and the U.S. Supreme Court has yet to address the issue definitively.

Just as an unratified Equal Rights Amendment cannot guarantee gender equality, believing an OLC memo is constitutional law, makes an ass out of you and me.

Inciting Violence is a Felony according to 18 U.S. Code Â§"-373, and thus, an impeachable offense.

Laws protecting education, environment, equal opportunity and peaceful coexistence cannot be changed by a president daring the 25th Amendment to Combine his and Wayne LaPierre's personal haul on the backs of taxpayers and membership fees - unless we the grassroots, allow such mockery to supplant rational thought.

Still addicted to NRA marketing tools: Donald Trump and, the only thing that stops a bad man with a gun is a good man with a gun, Wayne LaPierre absconds with millions of NRA member dues, while officials defend police who murder and ignore those who sacrifice to defend.

Most nations experience video games and mental health issues, but too often in America, we wall up our mentally ill in, private prisons for profit.

It's no longer enough to, follow the money. We must transform our Judicial system into a competent engine recapturing ill-gotten gain and channeling it from those who profit from baiting hate with fear of losing guns, into investments insuring the welfare of Veterans, teachers and the underemployed of every race, sexual choice and philosophy - revitalizing our DOJ with our commitment to, Justice for All.

We the People have inspired the world's growing desire for democracy. Perhaps it's time we take a refresher course in the courage of Puerto Rico, Hong Kong and Moscow citizens - and rise up to walk the walk of all our Rockets' Red Glare Land of the Free, talk - realizing atop the list of endangered species Trump's clan is willing to sacrifice on the altar of short-sightedness for profit, is the human species - assuring homeland insecurity for our children.

In 1886 France, awarded Americans the Statue of Liberty, in recognition of America as the lighthouse to safe harbor - reaffirming its promise when the Emma Lazarus poem was cast onto a bronze plaque and mounted inside Lady Liberty's pedestal in 1903.

There is no preserving Homeland Security, no protecting school children and no defending first-responders when McConnell's trumped enablers avert their eyes from China's militarizing its border with Hong Kong, Kim Jong Un's nuclear target practice, with impunity, in the air space of American allies, South Korea and Japan - and Russia's attempt at creating a flying Nuclear Reactor - with Putin's inability to do so without injecting the atmosphere with nuclear radiation.

If Social Media platforms are now accepted influencers, then we the influenced need choose carefully for whom we're encouraged to vote, for our personal homeland security depends on trusting the diagnosis of the agenda of online posts.

Unless Americans are kept safe from people like Charles & David Koch, Mike Pence, William Barr, John Mercer, Mitch McConnell and Donald Trump, who enable the hate that insists, no room in the inn - without a good credit rating - no child will be safe, and no Homeland Security achievable.

Americans claiming America has always been the best and greatest, need actualize, to those much is given, much is expected.

The lies we tell ourselves, destabilize every family's homeland security.