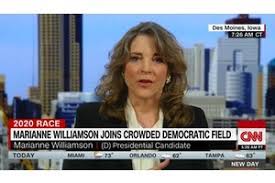 In today's Gospel reading, we encounter Jesus' radical message of social justice and of the abundance-for-all that results from accepting his insights. Significantly for this series on the presidential candidacy of Marianne Williamson, her program parallels that of the Master whose miraculous teaching has constituted the center of her own career for the last 30 years and more.

Before I get to that, however, allow me a word about miracles and Marianne's presidential campaign.

For starters, she herself is very clear about one thing: without a miracle, our country (and the world) is doomed. But that doesn't mean her thinking is negative or pessimistic.

That's because (and this is crucial) Marianne's use of the term "miracle" does not reference marvels contrary to the laws of nature. Instead, her understanding of the word is something more significant even than the "miraculous" catch of fish reported in today's Gospel reading. By miracle she means a profound change in consciousness. It's a change in attitude from one governed by fear and guilt to an outlook inspired by love and forgiveness. As I said, without that change, we're all finished.

Think about it. Isn't it true that fear and guilt absolutely govern our lives? We're taught to be very afraid of the Russians, Iranians, the Taliban, ISIS, Muslims, immigrants, climate change, nuclear holocaust, poverty, the police, gun violence, and death. And standard answers to such threats always include denial and violence in the form of war, more guns, sanctions, walls, prisons, weapons-modernization-programs, and an unlimited consumerism that has us drowning in our own waste.

In fact, it's precisely that fearful thinking that continues to inform the candidacies of our country's political classes (Democrats as well as Republicans). All of them except Marianne Williamson are imprisoned in old thought patterns. All of them are locked into political group think which typically dismisses Marianne's approach as "unrealistic," "impractical," "inexperienced," too idealistic.

Ignored is the fact that their own "realistic" thinking has brought us to the brink of extinction. Their "practical" consciousness has given us the war in Iraq and at least six other countries, the resulting uptick in terrorism, a planet on fire, world hunger in the face of enormous food waste, homeless populations freezing to death outside abandoned buildings, huge wealth disparities, the threat of nuclear war, more prisoners than anywhere else in the word, and a whole host of other problems.

All of those catastrophes, Marianne tells us, will remain without solution absent the miracle, absent the change in consciousness that her campaign represents. She's fond of quoting Einstein who said that the same kind of thinking that brought us into a crisis cannot extricate us from its predicament.

Now get ready: For Marianne, the answer to all those perceived threats is love and forgiveness. Yes, she actually dares to say that-- to say what Jesus said! But for Williamson, both love and forgiveness are understood in terms of realizing the unity of all human beings. In other words, only a switch in consciousness from seeing others as separate to envisioning humankind's underlying unity can save us.

Can you imagine seeing ISIS, the Taliban, Muslims, immigrants, refugees, people of all races, religions and skin colors and Mother Earth Herself as truly related to us at an intimate level?

Actually, it's more than that. As Marianne tells us repeatedly, "There is really only one of us here." All those demonized groups are us. That's the meaning of Jesus' teaching about loving our neighbor as ourselves. Our neighbor is our self. When we hate and kill him or her, we're hating ourselves. We're committing suicide!

Radicality like Marianne's is precisely what today's liturgical readings call us to. They remind us that followers of Jesus (and about 75% of Americans claim to be that) should not shy away from love and forgiveness in the form of wealth redistribution and reparations to exploited classes. No, it's the heart of our faith. It's the only realistic solution to our problems, both personal and political.

Consider today's Gospel story. According to Luke, the crowds of those following Jesus are so thick that he has to get into a boat, a little bit from shore to address the people.

Thanks to what we read from Luke two weeks ago, we know who was in the crowd and why they were so enthusiastic. They were poor people responding to Jesus' proclamation of a Jubilee Year. (For Jews, Jubilee, "the year of the Lord's favor," was good news for the poor. That's because every 50 years it called for radical wealth redistribution in Israel. Debts were forgiven, slaves were set free, harvests were left un-gleaned and land was returned to its original owners.)

Related Topic(s): Consciousness; Forgiveness; Jesus; Justice; Love; Marianne Williamson; Presidential Campaign Democratic; Presidential Cnadidates; Sunday, Add Tags
Add to My Group(s)
Go To Commenting
The views expressed herein are the sole responsibility of the author and do not necessarily reflect those of this website or its editors.