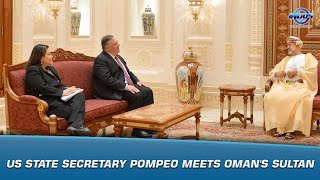 US Secretary of State Mike Pompeo Thursday concluded a Middle East tour after talks in Oman with Sultan Haitham bin Tarik Al-Said which apparently failed to convince Sultan to follow the UAE's move and normalize relations with Israel.

The official Oman News Agency said that "aspects of the existing bilateral cooperation between the sultanate and the United States were reviewed within the framework of the strong relations that bind them," but made no reference to relations with Israel.

According to Middle East Eye, the two spoke about the "need to strengthen relations." The ministers "agreed to maintain direct and continual contact" and "continue the important dialogue between the two countries to advance the process of normalization" in the region, the statement said.

Oman has long had dialogue with Israel and welcomed the UAE's August 13 announcement that it had normalized ties, while reaffirming its support for the Palestinians.

In October 2018, Israeli prime minister Benjamin Netanyahu met the then Sultan Qaboos bin Said al Said in Muscat; the visit was revealed following Netanyahu's return to Israel. Right after the visit, Omani Foreign Minister Yusuf bin Alawi bin Abdullah described Israel as an "accepted Middle East state." He said, "The world is also aware of this fact. Maybe it is time for Israel to be treated the same [as other states] and also bear the same obligations." In April 2019, bin Abdullah said that "Arabs must take initiatives to make Israel overcome 'fears for its future' in the region. [Israeli newspaper reports]

Pompeo had said he was hopeful other nations would follow the UAE, which became only the third Arab country to establish relations with Israel, after Egypt and Jordan.

On Tuesday, Sudan's transitional government rejected the US request to normalize its ties with Israel. "About the US request to normalize ties with Israel, Prime Minister Abdallah Hamdok has explained to the American minister that the current transitional government has no mandate to decide on the issues out of its transitional agenda that related to the democratic transformation, peace process and the holding of elections in 2022," an official statement of Sudan said.

Earlier this month Sudan fired the country's foreign ministry spokesman Haidar Badawi over his remarks about normalizing relations with Israel. Badawi had said Khartoum was looking forward to concluding a peace agreement with Israel. "There is no reason to continue hostility between Sudan and Israel," he said.

On Wednesday, Bahrain told the visiting US Secretary of State Mike Pompeo that it was committed to the creation of a Palestinian state, implicitly rejecting his push for Arab countries to swiftly normalize ties with Israel.

"After American and Israeli officials spent days hyping the prospect that other Arab countries would soon follow the UAE in normalizing relations with Israel, the lack of any additional public commitments during Secretary Pompeo's regional tour looks like an anti-climax," AFP Thursday quoted Hugh Lovatt of the European Council on Foreign Relations as saying.

Author and journalist. Author of Islamic Pakistan: Illusions & Reality; Islam in the Post-Cold War Era; Islam & Modernism; Islam & Muslims in the Post-9/11 America. Currently working as free lance journalist. Executive Editor of American (more...)
Related Topic(s): Arab; Bahrain; Future; Israel; Oman; Secretary Of State Mike Pompeo; Sudan; UAE United Arab Emirates, Add Tags
Add to My Group(s)
Go To Commenting
The views expressed herein are the sole responsibility of the author and do not necessarily reflect those of this website or its editors.