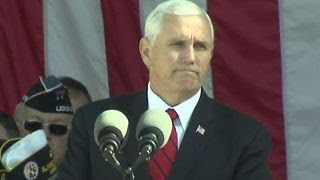 On May 25th Vice President Mike Pence was the featured speaker at the United States Military Academy commencement. His speech was predictably an encomium celebrating both the diversity and the success of the newly commissioned officers as well as of the system at West Point that had produced them, but it also included interesting insights into how he and the other non-veterans who dominate the policy making in the White House see the military.

Most media commentary on the speech was either shocked or pleasantly surprised by Pence's prediction that the graduating officers would soon be at war. He said "It is a virtual certainty that you will fight on a battlefield for America at some point in your life. You will lead soldiers in combat. It will happen. Some of you will join the fight against radical Islamic terrorists in Afghanistan and Iraq. Some of you will join the fight on the Korean Peninsula and in the Indo-Pacific, where North Korea continues to threaten the peace, and an increasingly militarized China challenges our presence in the region. Some of you will join the fight in Europe, where an aggressive Russia seeks to redraw international boundaries by force. And some of you may even be called upon to serve in this hemisphere. And when that day comes, I know you will move to the sound of the guns and do your duty, and you will fight, and you will win. The American people expect nothing less. So, wherever you're called, I urge you to take what you learned here and put it into practice. Put your armor on, so that when not if that day comes, you'll be able to stand your ground."

Pence may or may not have known that military academy graduates have only a five-year active duty commitment after graduation. Many do not stay in the service after that point, instead using their security clearances and resumes to obtain well paying positions with defense and national security contractors.

If Pence was aware of that five-year window, he was implying that he expects multiple wars will involve the United States during his own remaining time in office, assuming that he and President Donald Trump are reelected in 2020. He might even be assuming that war is inevitable no matter who is in the driver's seat in the White House because America's numerous enemies, which he identified, cannot otherwise be dissuaded from their "nefarious behavior."

Pence's choice of words is revealing. There is a "virtual certainty" of "fight[ing] on a battlefield for America" and that battlefield is global, including both transnational Islamic terrorism and the western hemisphere. The language implies that American security requires "full spectrum dominance" everywhere. It encompasses traditional national enemies, with a Pyongyang that "threatens peace," a China that is "militarized," and a Russia that is both "aggressive" and expansionistic. The soldiers must be prepared to fight "when not if that day comes."

First of all, it is discouraging to note that Pence believes that a war or wars must take place, and further, one must have to wonder exactly what scenarios are envisioned by Pence, and also presumably by his boss and colleagues, regarding precisely how war against other nuclear powers will play out. Nor does he entertain what would happen when the rest of the world begins to perceive the United States as its enemy due to its willingness to interfere in everyone's politics. And the American soldiers would die not knowing what they were fighting for, since they would understand from the onset that it had nothing to do with the defense of the United States.

The speech is, in short, a recognition that the Trump Administration sees perpetual war on the horizon, a viewpoint that is particularly alarming as one can quite easily make the case that the United States is not seriously threatened at all by anyone on Pence's enemies list and is therefore the aggressor. China is a regional power, Russia does not have the resources or will to reestablish the Soviet Union, and North Korea has only limited capability to attack anyone, even if it should choose to do so. Islamic terrorism is largely a creation of the United States in the first place and maintains its potency by the adverse impact of the continued US presence in Muslim lands. And the suggestion that Venezuela and/or Cuba might be a threat to America is, quite frankly, laughable.

If Mike Pence is seriously interested in looking around to see who has been most interested in starting new wars, he should look to gentlemen named Bush and Obama, not to mention his own colleagues John Bolton and Mike Pompeo. And then there are Washington's feckless allies Israel and Saudi Arabia, who are keen to advance their own interests by means of piles of dead American soldiers.

Related Topic(s): America Culture Of Violence; American Military; Going To War; Government Crime; Soldiers; Vice President Mike Pence; Wars, Add Tags
Add to My Group(s)
Go To Commenting
The views expressed herein are the sole responsibility of the author and do not necessarily reflect those of this website or its editors.