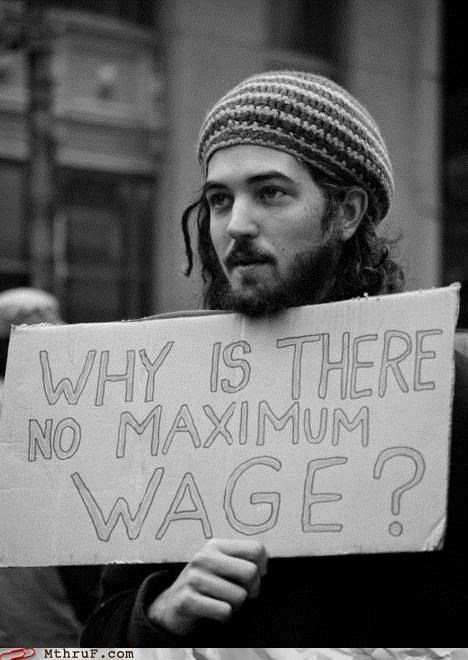 Why is there no Maximum Wage?
(Image by work.failblog.org)   Details   DMCA

For most of human evolution, we lived in small groups where a psychopath couldn't fool people enough to take over in peacetime, but became a real asset in a crisis, assuming leadership and minimizing the losses rather than trying unsuccessfully to save everyone. Once we developed agriculture, there was an opportunity for them to seize control permanently. Farmers have good years and bad ones, and a tribe that kept a 5-year food reserve would eventually be able to just take over the land of neighbours who only kept a 3-year stockpile. When we centralized grain storage, we were persuaded to put too much trust in the keeper, and lost control of the community wealth.

A good definition of a psychopath is one who is just too slippery for the law. Watching companies pervert the intention of environmental regulations has been like a game of whack-a-mole. I don't think we can ever get the psychopaths out of power without a total ban on private wealth, and laws to preserve that from trickery. A psycho would have to make a reliable voting bloc out of a co-op or similar group, which would be far weaker than having the funds for a secret army of PR schemers, lawyers and crooks.

One long-standing group advocates a maximum range of 4:1 in wealth, but I'd be comfortable with a few outside of that, maybe 10:1 on a bell curve. We'd also need exemptions for renunciants, so that they wouldn't make ownership impossible for others. Right now, I know of people with ten times less than myself, and others with ten times more, and I can't really imagine the daily concerns of either group. Where I grew up, the poor people had 14' boats with 10 HP, and the richest people had 18' cabin cruisers with 50 HP motors, but it was still "our" river. It is a lot easier to feel a part of the Family of Humanity when Police are not busy keeping poor people away from rich people, and everyone has about the same space, etc. Some people will always be afraid of strangers, but knowing that they have no reason to steal really helps.

The range of talent is greater than 10:1, but talent works for self expression, and is inhibited by great financial risk. Crowd funding has replaced the only social utility of millionaires. Without a pot of gold as a lure, people would get into politics as a public service again. With no way to get rich and protected by selling guns, wars would not be fomented for profit, and with economic equality, there would be little reason to fight.

Currently, the progressive causes that get into the mainstream media are all selected for minimum threat to the oligarchy, and maximum emotional appeal. After years of this priming, progressives have been compared to a circular firing squad. We have dozens of good causes struggling for recognition, and a lot of potential allies banished and dismissed. Everything is focussed on immediate problems, while the overwhelming influence of the plutocracy affecting all our lives is barely mentioned. The one thing we have most in common is the one we ignore, lest we be called communists, and assumed to be totalitarian about it.

If it were not for economic inequality, even primitive democratic systems might well be adequate. Without big money working to stop proportional representation systems such as ranked choice voting, it would be easier to fine-tune our governance. Without the influence of investors, schools would teach people how to avoid bad deals instead of arcane number theory as "math." The managers they train would be keen on maximizing service and efficiency, not syphoning off profits. The same surveillance equipment that is tracking every hint of dissent now should instead be trained near any concentrations of wealth so that cheating becomes impossible.

Without large fortunes at stake, corruption in politics would, at least, be an equal-opportunity game for those interested. With any luck, after a few generations we would all absorb enough of the principles of systems management that even minor fiddles would be broken up quickly. There will always be people keen on weilding authority, but without deep pockets and desperate situations to exploit, their range will be much reduced. Grass roots power would be the only kind, and without dead patches of destitution. Psychopathy aside, people have a wide range of political and persuasive talents. There should probably be a bureau of equalization to sniff out novel kinds of class formation.

We come from a long evolution for life without land ownership, or in groups too big for us to know everyone. The USSR had trouble with the large collective farms, because it was easy to avoid doing good work on them, and there was no incentive to do it. By contrast, the tiny private kitchen gardens were wildly productive. It seems that we should keep our co-ops, etc, small enough that no one can slack off or rise into another whole level of management. All the groups with common interests will want to make sure that their trade associations stay responsive, but without steady sabotage from monied schemers, better education, and good systems engineering, a planned economy would have a much better chance.

Without advertising, media could get back to realizing the original expectations of free education and open debate. Without adversising, people would make better decisions for themselves and the planet. Our internet experience would improve tremendously. Without corporate funding, Universities could return to the pursuit of knowledge, and co-operate to create non-patented medicines and other innovations. Without fortunes at stake and with computers, patents and copyrights could be automatic, recognizing the root of any popular meme and paying in recognition, with a token royalty from general revenue. With all research open-source, collaboration would blossom.

So, I conclude that the modern crisis is really an enhanced version of the ancient crisis of concentrated ownership, and that we need to learn a new response to wealth if we are to survive as a civilized species.

My vocation was in Human Powered Vehicle design. I won the Practical Vehicle prize with a radical chassis that integrated the springs and suspension with the composite frame. I had many eager customers, but wound up learning hard lessons about (more...)

Related Topic(s): Efficiency; Evolution; Management; Meme; Plutocracy; Power; Ring Fence; Rule Of Law; Rule Of The Criminal Banking Cartel; Systems; (more...) Universities, Add Tags  (less...)
Add to My Group(s)
Go To Commenting
The views expressed herein are the sole responsibility of the author and do not necessarily reflect those of this website or its editors.

Our Dual Moral Codes are the Real Base of Most Disputes

One Rule to Ring Them All

Better Bikes to Save the World - and your health