A moment in which U.S. politicians are openly talking about the need to sacrifice lives to a disease in the name of profit may be a good moment for recognizing the evil motivations of the same politicians when it comes to foreign policy.

Congress members did not, no matter what Joe Biden says, vote for war on Iraq in order to avoid war on Iraq. Nor did they make a mistake or a miscalculation. Nor does it make the slightest difference how successful they were in persuading themselves of ludicrous and irrelevant lies about weapons and terrorism. They voted for mass murder because they did not value human life and did value one or more of the following: elite, corporate, and nationalistic support; global domination; weapons profits; and the interests of major oil corporations.

But now that it's all shamelessly out there, shouldn't we be allowed to go back and point out how it was there all along, albeit more secretly and with even a bit of shame?

A minority of us have put up a struggle against oil and gas pipelines locally, where we live, or on indigenous lands in North America, without always recognizing that much of the oil and gas from these pipelines, if they are built, will go to fueling the planes and tanks and trucks of distant wars and certainly without recognizing the extent to which the distant wars are also wars against resistance to pipelines.

Charlotte Dennett's new book, The Crash of Flight 3804, is among other things a survey of pipeline wars. Dennett is, of course, well aware that wars have numerous motivations, and that even the motivations tied to oil are not all related to the construction of pipelines. But what she makes clearer than ever is the extent to which pipelines have in fact been a major factor in more wars than most people recognize.

Dennett's book is a combination of a personal investigation into the death of her father, the earliest member of the CIA to be recognized with a star on the CIA's wall honoring those who have died for whatever it is they have all died for, and a survey of the Middle East, country by country. So, it's not in chronological order, but if it were, a summary (with a few slight additions) might go something like this:

The planned Berlin to Baghdad Railroad was a proto-pipeline that drove international conflict in the way that pipelines would. Churchill's decision to convert the British navy to oil and to take that oil from the Middle East set the stage for endless wars, coups, sanctions, and lies. A major (by no means the only) motivation behind World War I was the competition over Middle-Eastern oil, and in particular the question of an Iraq Petroleum Company Pipeline, and whether it should go to Haifa in Palestine or to Tripoli in Lebanon. 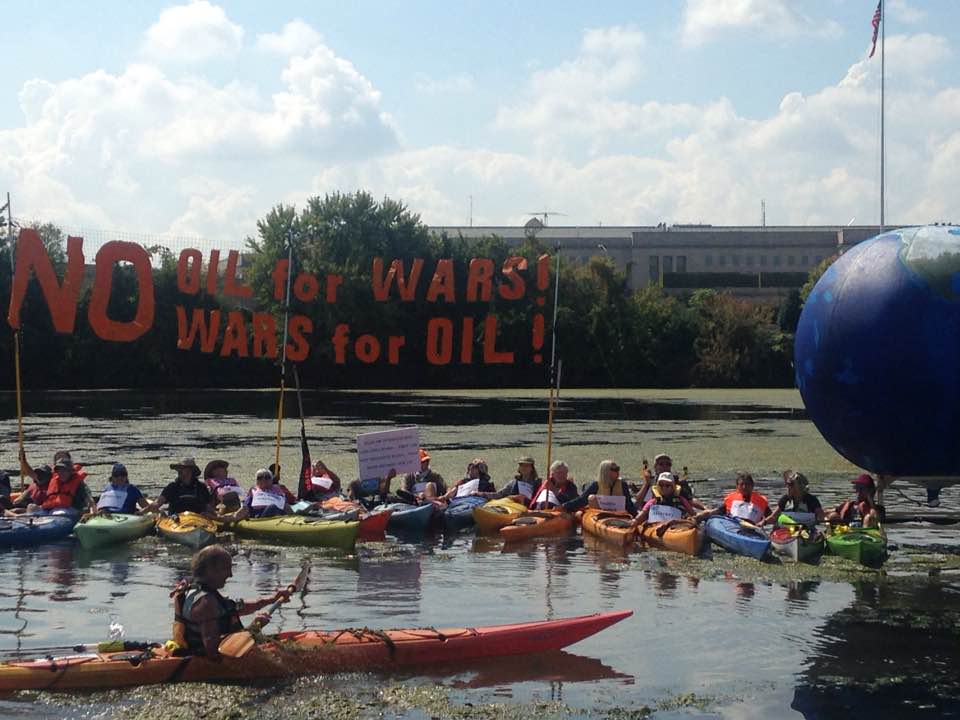 Following World War I, the Sykes-Picot Agreement and the San Remo Agreement on Oil laid colonial claim to the oil that had somehow gotten underneath other people's land and to the land on which pipelines could be built. Dennett notes regarding the San Remo Agreement on Oil: "Over time, the word 'oil' disappeared from descriptions of the agreement in history books, just as it would disappear from public discourse over U.S. foreign policy, which in the 1920s was known as 'oleaginous diplomacy,' until the term 'oleaginous' also disappeared."

World War II happened for many reasons, chief among them World War I and the brutal Treaty of Versailles. The reasons that most people in the United States will give you for World War II were concocted after it was over. As I've written about often, the U.S. government led the world's governments in refusing to accept the Jews, and the U.S. and British governments refused right through the war to take any diplomatic or even military action to help the victims of Nazi camps, principally because they did not care. But Dennett points to another reason for that inaction, namely Saudi pipeline desires.

The King of Saudi Arabia may have been a leading opponent of democracy, liberty, freedom, and (as likely as not) apple pie, but he had oil and Islam, and he did not want large numbers of Jews to migrate to Palestine and gain control over a portion of a pipeline to the Mediterranean. In 1943, as the United States was deciding not to bomb Auschwitz and to suppress reports on the Holocaust, the King was warning against too many Jews settling in the Middle East after the war. The U.S. military bombed other targets so close to Auschwitz that the prisoners saw the planes pass over, and erroneously imagined they were about to be bombed. Hoping to stop the work of the death camps at the cost of their own lives, prisoners cheered for the bombs that never came.

Posters and graphics that I've seen this week reminding people that Ann Frank died of a disease in a detention camp, admirably aim at freeing prisoners to reduce their risk of contracting coronavirus. None mention the role of the U.S. State Department in rejecting Frank's family's visa application. None grab U.S. culture by the collar and hold its nose in the grim realization that such a rejection was not an odd quirk or a mistake or a miscalculation but something driven by evil motivations not unlike those now telling U.S. senior citizens to die for Wall Street.

The Trans-Arab Pipeline, ending in Lebanon rather than Palestine, would help make the United States a global power. Haifa would lose out as a pipeline terminus, but would later gain the status of a regular port for the Sixth Fleet of the United States. Israel as a whole would become a giant pipeline protection fortress. But Syria would be troublesome. The 1945 Levant Crisis and the 1949 CIA coup in Syria were pure pipeline politics. The U.S. installed a pro-pipeline ruler in this first, and often forgotten, coup by the CIA.

The current war on Afghanistan was begun and prolonged for years, in part, for the dream of building a TAPI (Turkmenistan, Afghanistan, Pakistan, India) Pipeline a goal often openly admitted to, a goal that has determined the selection of ambassadors and presidents, and a goal that is still part of ongoing "peace" negotiations.

David Swanson is the author of "When the World Outlawed War," "War Is A Lie" and "Daybreak: Undoing the Imperial Presidency and Forming a More Perfect Union." He blogs at http://davidswanson.org and http://warisacrime.org and works for the online (more...)
Related Topic(s): Pipeline; Pipeline Delay; Pipeline Halted; Pipeline Inspection Gauges; Pipeline Spill; Pipelineistan; Pipelines For Jesus, Add Tags
Add to My Group(s)
Go To Commenting
The views expressed herein are the sole responsibility of the author and do not necessarily reflect those of this website or its editors.