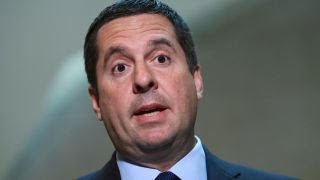 Throwing down the gauntlet on alleged abuse of the Foreign Intelligence Surveillance Act (FISA) by the Department of Justice and the FBI, House Intelligence Committee Chair Devin Nunes (R-Calif.) stated that there could be legal consequences for officials who may have misled the FISA court. "If they need to be put on trial, we will put them on trial," he said. "The reason Congress exists is to oversee these agencies that we created."

Attkisson said she had invited both Nunes and House Intelligence Committee Ranking Member Adam Schiff (D-Calif.) but that only Nunes agreed. She asked him about Schiff's charge that Nunes' goal was "to put the FBI and DOJ on trial." What followed was very atypical bluntness -- candor normally considered quite unacceptable in polite circles of the Washington Establishment.

Rather than play the diplomat and disavow what Schiff contended was Nunes' goal, Nunes said, in effect, let the chips fall where they may. He unapologetically averred that, yes, a criminal trial might well be the outcome. "DOJ and FBI are not above the law," he stated emphatically. "If they are committing abuse before a secret court getting warrants on American citizens, you're darn right that we're going to put them on trial."

The stakes are very high. Current and former senior officials -- and not only from DOJ and FBI, but from other agencies like the CIA and NSA, whom documents and testimony show were involved in providing faulty information to justify a FISA warrant to monitor former Trump campaign official Carter Page -- may suddenly find themselves in considerable legal jeopardy. Like, felony territory.

This was not supposed to happen. Mrs. Clinton was a shoo-in, remember? Back when the FISA surveillance warrant of Page was obtained, just weeks before the November 2016 election, there seemed to be no need to hide tracks, because, even if these extracurricular activities were discovered, the perps would have looked forward to award certificates rather than legal problems under a Trump presidency.

Thus, the knives will be coming out. Mostly because the mainstream media will make a major effort -- together with Schiff-mates in the Democratic Party -- to marginalize Nunes, those who find themselves in jeopardy can be expected to push back strongly.

If past is precedent, they will be confident that, with their powerful allies within the FBI/DOJ/CIA "Deep State" they will be able to counter Nunes and show him and the other congressional investigation committee chairs, where the power lies. The conventional wisdom is that Nunes and the others have bit off far more than they can chew. And the odds do not favor folks, including oversight committee chairs, who buck the system.

On the other hand, the presumptive perps have not run into a chairman like Nunes in four decades, since Congressmen Lucien Nedzi (D-Mich.), Otis Pike (D-NY), and Sen. Frank Church (D-Idaho) ran tough, explosive hearings on the abuses of a previous generation deep state, including massive domestic spying revealed by quintessential investigative reporter Seymour Hersh in December 1974. (Actually, this is largely why the congressional intelligence oversight committees were later established, and why the FISA law was passed in 1978.)

At this point, one is tempted to say plus ça change, plus c'est la même chose -- or the more things change, the more they stay the same -- but that would be only half correct in this context. Yes, scoundrels will always take liberties with the law to spy on others. But the huge difference today is that mainstream media have no room for those who uncover government crimes and abuse. And this will be a major impediment to efforts by Nunes and other committee chairs to inform the public.

One glaring sign of the media's unwillingness to displease corporate masters and Official Washington is the harsh reality that Hersh's most recent explosive investigations, using his large array of government sources to explore front-burner issues, have not been able to find a home in any English-speaking newspaper or journal. In a sense, this provides what might be called a "confidence-building" factor, giving some assurance to deep-state perps that they will be able to ride this out, and that congressional committee chairs will once again learn to know their (subservient) place.

Much will depend on whether top DOJ and FBI officials can bring themselves to reverse course and give priority to the oath they took to support and defend the Constitution of the United States against all enemies foreign and domestic. This should not be too much to hope for, but it will require uncommon courage in facing up honestly to the major misdeeds appear to have occurred -- and letting the chips fall where they may. Besides, it would be the right thing to do.

Ray McGovern works with Tell the Word, the publishing arm of the ecumenical Church of the Saviour in inner-city Washington. He was an Army infantry/intelligence officer and then a CIA analyst for 27 years, and is now on the Steering Group of Veteran Intelligence Professionals for Sanity (VIPS). His (more...)
Related Topic(s): Devin Nunes; FBI; FISA; Investigation, Add Tags
Add to My Group(s)
Go To Commenting
The views expressed herein are the sole responsibility of the author and do not necessarily reflect those of this website or its editors.