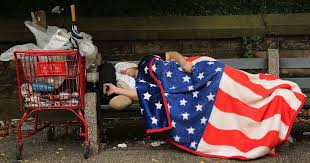 Although it might not be apparent at first glance, the readings for this Fifth Sunday of Easter address homelessness. During this COVOD-19 pandemic, it's an exceptionally vexing problem that finds many Americans unable to pay their rent or mortgages. In New York City, for example, many of those rendered homeless end up seeking shelter and the possibility of social distancing within the city's subway cars.

As if in response to such developments, and on this Mothers' Day, today's selections centralize the concern of the Great Cosmic Mother for her children in similar situations of powerlessness and abandonment.

These, the readings tell us, were also the concern of Yeshua's Jewish followers immediately following his death and the mysterious experience they came to call his "resurrection." For those reformers of Judaism, social problems like hunger and homelessness (experienced specifically by single mothers) were not to be solved by force or organized abandonment, but by compassion, sharing, service, and loving kindness.

But before I get to that, think for a moment about homelessness in America. It's deeply connected with the U.S. prison system which has actually become the de facto form that low-income housing assumes here.

That point was made last week on "Democracy Now," when Amy Goodman interviewed Dr. Ruth Wilson Gilmore. She's the co-founder of California Prison Moratorium Project (CPMP). CPMP represents an abolitionist decarceration movement in the United States which houses approximately one in four prisoners in the entire world. (Perhaps coincidently, the U.S. has also produced the same proportion of COVID-19 deaths.)

To begin with, Wilson Gilmore contrasted the U.S. approach to crime with those of other industrialized countries. Within our borders the emphasis is on deprivation, isolation, punishment, pain and force. By contrast, many other systems emphasize rehabilitation.

Of their "Reformative Justice" dispensations the interviewee said "Where life is precious, life is precious. In places where the state, the government, municipalities, social justice organizations, faith communities, labor unions work together to lift up human life, the incidence of crime and punishment, including incidents of interpersonal harm, are less likely to occur. . . We also see that in places where inequality is the deepest, the use of prison and punishment is the greatest."

In the same interview, Wilson Gilmore went on to specifically address the problem of homelessness here and what she called our country's strategy of "organized abandonment." By that she meant urban organization like New York City's, where working class neighborhoods are routinely razed to make room for gentrified condos and exotic shopping experiences.

There, displaced lower-class renters are left on their own. Some, of course, are welcome to return to their old neighborhoods as waitpersons, delivery personnel, janitors, nannies and caregivers. That's bad enough, but others are excluded altogether. They're left homeless and find themselves with nowhere to seek shelter and social distancing but in those MTA subway cars I just mentioned.

Nevertheless, instead of dealing with the real problem of homelessness, NYC's mayor and the state's governor have justified increased deployment of transit police who apply to the systemically abandoned the same sort of force that their counterparts use in American prisons.

In the U.S., Wilson Gilmore observed, force and violence turn out to be the default strategy employed to address most problems.

Related Topic(s): Decarceration; Evictions; Faith; Foreclosures; Goddess; Homelessness; Housing; Jesus; Resurrection; Spirit; (more...) Sunday, Add Tags  (less...)
Add to My Group(s)
Go To Commenting
The views expressed herein are the sole responsibility of the author and do not necessarily reflect those of this website or its editors.