Reprinted from popularresistance.org By Margaret Flowers and Kevin Zeese

The broad social movement in the United States has been growing for a number of years, most visibly in recent years with the Occupy Movement and then immigrant's rights, Indigenous, workers' and Black Lives Matter movements, to name a few. As the inauguration protests, the Women's Marches and the GOP protests in Philly showed this week, the broad social movement seems to be growing exponentially and some are escalating their tactics. 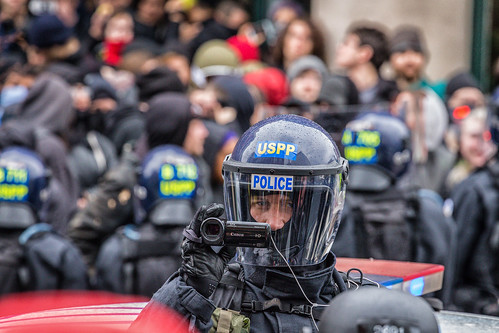 During the inauguration, there was a wide range of tactics used from permitted marches to peaceful blockades to property destruction. Eleanor Goldfield and Jason Yawn discuss black bloc tactics that included breaking windows, turning over trash cans and setting a limo on fire. They discuss why all tactics require consideration of whether the it will help to grow the movement or create blow black that strengthens the police and pushes people away from the movement. They raise the question of why people seem more concerned about broken windows than broken lives. To us, the use of tactics must always serve a strategy and goal.

With daily assaults on our rights and the waning possibility of a livable future, one thing is clear: It is time for all of us to resist. That was the message seven Green Peace activists sent to Donald Trump on Wednesday with a 70 foot-wide banner hung from a crane within sight of the White House.

Resistance can and should be for positive changes. It's not enough to fight against the status quo, we must change the systems. That's why we are announcing a new campaign for National Improved Medicare for All. We choose this campaign because urgent change is needed with 30,000 people dying annually due to lack of access to healthcare. It is an issue that cuts across all races, genders and classes. And, it is an issue that has not been solved, despite obvious and simple solutions, because of the deep corruption of both parties. When we enact National Improved Medicare for All we will know the power structure is weakening. More information about the new campaign is below.

Fighting Back on Many Fronts

There is no doubt that we will have to continue to engage in struggles on many fronts in the days, weeks and years ahead. Daily Executive Orders, Trump's nominees and the plans put forth by Paul Ryan show that the movement will have to stop a lot of damage being planned by Trumpism.

Right from the start, the Trump administration made it clear where they stand on critical issues. The White House website expresses intolerance for dissent and praises the military and police. It says, "The dangerous anti-police atmosphere in America is wrong. The Trump Administration will end it." This presents a clear threat to all protesters, but appears to be specifically directed at Black Lives Matter and other movements for police accountability and justice system reform.

Trump has declared a war on the media. It isn't only the administration's outright lies, which is actually not unusual from the White House, but also their refusal to answer reporters questions. And journalists are being arrested for covering protests and are being given felony charges.

Trump loves the military. He wanted to have tanks and missile launchers in the Inauguration Parade, but the Pentagon refused. He told the Washington Post that there will be military parades in Washington, DC and New York City. If this glorification of militarism happens, let's make sure that either nobody shows up or there are more antiwar protesters than spectators. Think of the great antiwar protest images that could be a message to the world other than Trump's effort to glorify the military.

The Trump administration is also cracking down on federal agencies, freezing their hiring and funding and even banning information about climate change on federal websites and the use of social media. In response, federal workers are using social media anonymously and scientists are organizing a "Scientists March on Washington" to say "There are certain things that we accept as facts with no alternatives. The Earth is becoming warmer due to human action""

When it comes to dealing with the climate crisis, President Trump is driving in the wrong direction. The White House released a memorandum calling for the Dakota Access and Keystone XL Pipelines to be expedited. As the tribal council called for protesters to leave Standing Rock, the local police and national guard became more aggressive by stepping onto tribal territory and attacking media with rubber bullets. LaDonna Brave Bull Allard, a founder of the camp,along with others is refusing to retreat and is going ahead with plans to build a green energy camp on her property. Students escalated their resistance to fossil fuels this week by walking out of class nationwide to encourage further divestment.

Related Topic(s): Health; Inauguration; Protest- Civil Disobedience; Status Quo; Womens March On Washington, Add Tags
Add to My Group(s)
Go To Commenting
The views expressed herein are the sole responsibility of the author and do not necessarily reflect those of this website or its editors.