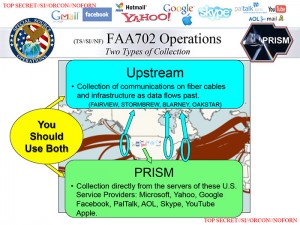 Senior national security officials, from President Barack Obama on down, have made light of the National Security Agency's intrusive monitoring of the public by saying "only" metadata about communications, not the content of those communications, are collected. One might ask, then, why is it that intelligence and law enforcement officials much prefer this metadata approach?

For one, analysts can determine a great deal about a person -- any person -- by following the electronic crumbs that people inevitably leave behind in the course of their daily routines. And this data-byte-crunching analysis is much less time-consuming than monitoring each phone call or reading each e-mail.

So, the distinction between listening in on conversations and "just" collecting phone numbers called and the duration of the conversations is a red herring. The truth is that persistent, bulk collection of metadata in support of analysis  is  -- not can be -- more revealing over time than content, the latter prohibited from collection unless probable cause criteria have been met in the eyes of a court.

Metadata collection can answer all but one of the five "W's" of journalism: the Who, What, Where and When. Given time, it can even respond to "Why" someone interfaces with digital information systems the way they do. It can do this because it is possible to discern patterns of behavior in metadata.

A very simple example: You go to work via a toll road, taking essentially the same route five days a week, for about 48 weeks a year. A license plate scanner produces information about where your car was when it was scanned -- and at what time. Your passive transponder (e.g., E-Z Pass) records your entrance onto the toll road at which ramp, and when you were there. The same transponder reports when and where you got off the toll road.

You stopped to get gas. Your credit card records where you were and when you bought the gas. You arrive at work and turn on your computer. Your Internet service provider (ISP) records when an IP address was given to your computer and what time it was provided. The IP address is associated with a server at a location with a specific address and is associated with your name.

So it is possible to know when you arrived at work. Or perhaps you called your wife to tell her you arrived safely. Your phone has locational information and the time of the call is recorded. Of course, the phone is associated with your account/name.

Similarly, any deviation from these patterns -- for whatever reason -- would also be apparent. A consistent deviation might reveal a significant change in your personal life (e.g., job trouble, health problems, marital difficulties).

While this ability to construct a mosaic of your life may not be understood by those inclined to believe what they hear on the evening "news" -- that the metadata is no real threat to your privacy -- this reality is eminently understandable to those familiar with the technological power of the various NSA programs. MIT graduate students, for example, have produced a video, based largely on personal experience as well as research, that makes it very clear.

A caveat here: I have not seen everything that has been released by former NSA contractor Edward Snowden so far, but I have seen most. Even taken together, these documents listing the names of the programs -- like PRISM, XKEYSCORE and UPSTREAM -- and the various diagrams depicting data flows on charts would not tell much to someone unfamiliar with the technological capabilities of these programs.

What is discernible is that NSA is interested in metadata and content from the Internet, a fact that is hardly classified. NSA is also interested in phone calls. That too is not classified, nor is it new. People have known for a long time that NSA's mission is to produce foreign intelligence from communications.

Former NSA Director Michael Hayden long ago made it clear that -- given the rapid changes in networked communications and associated technologies -- NSA needed to master the "net." There was no mistaking the intent. He even said he consulted with large Internet companies and their experts in Silicon Valley.

Bottom Line: Only people who work with these programs -- the contractors who support information technology, the IT developers and the NSA analysts -- understand what these programs are, what they do and how they do it, in other words, the extraordinary power that they possess.

Consortiumnews.com was founded by Robert Parry in 1995 as the first investigative news magazine on the Internet. The site was meant to be -- and has become -- a home for important, well-reported stories and a challenge to the inept but dominant (more...)
Related Topic(s): NSA; Privacy; Security, Add Tags
Add to My Group(s)
Go To Commenting
The views expressed herein are the sole responsibility of the author and do not necessarily reflect those of this website or its editors.