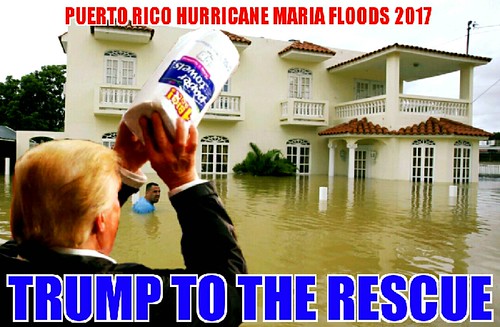 Puerto Rico: Trump Gets There Just In Time (With The Paper Towels).
(Image by IoSonoUnaFotoCamera)   Details   DMCA

I've visited Puerto Rico three times since becoming a senator. Each time, I've been struck by the island's natural beauty, its vibrant towns and cities, and -- most of all -- its warm, wonderful, resilient people. Puerto Rico is unforgettable.

In September 2017, though, Hurricanes Irma and Maria devastated the island and the millions of U.S. citizens who live there. I saw the destruction firsthand -- and I saw how the Trump Administration's slow and ineffective response denied families the help they needed and made it harder for them to recover.

It wasn't just the Trump Administration's inept response though. One of the biggest constraints holding back the recovery has been Puerto Rico's debt. Revenue needed to provide services to residents is instead going to pay off old debts. Few investors are willing to put money into rebuilding Puerto Rico with its massive debt overhang because they see no clear path to earning a return on their investment. And while Congress attempted to deal with the Puerto Rican debt crisis a few years ago -- with a bill called PROMESA -- that bill was enacted before the hurricanes and was not designed to account for the recent devastation.

If Puerto Rico were a big company in this kind of financial trouble, it could file for bankruptcy, pay some of its debts, discharge the rest, then start rebuilding. If Puerto Rico were an American city in this kind of financial trouble, it could do the same. But Puerto Rico isn't a corporation or a city. Because of its unique status, those legal options aren't available -- and so it's caught in a terrible position, battered by natural disasters with no clear path to recovery.

We must do better for our fellow citizens. That's why I have a plan to provide comprehensive debt relief to Puerto Rico so it can rebuild and thrive.

For over a decade, Puerto Rico has been a clear example of how well the federal government works for Wall Street and how poorly it works for everyone else.

Today, the island is struggling with $70 billion in government debt and more than $50 billion in pension obligations. A major chunk of that debt is held by Wall Street, which means that more than 3 million U.S. citizens who live in Puerto Rico are at the mercy of Wall Street executives who are focused on squeezing out every last penny of profit from this island.

These Wall Street firms are called "vulture funds." They buy the debt of a borrower in trouble, usually for pennies on the dollar, and then pick the bones clean when the borrower can't pay. For Puerto Rico, that means the Wall Street investors get paid by slashing services, selling government assets, and undermining any real chance the island might have to recover economically.

Congress had a chance to break the grip that Wall Street has over Puerto Rico's future. It could have given Puerto Rico the right to declare bankruptcy just like any American city. Instead, in the PROMESA legislation, Congress imposed an oversight board on the island. That board of seven political appointees has the power to oversee Puerto Rico's budget and force it to cut services so it can pay creditors like Wall Street.

I voted against PROMESA, and many of my fears about it have come true. So far, the control board has slashed basic government services throughout the island and imperiled Puerto Ricans' pensions, while generously helping out the Wall Street firms that hold Puerto Rico's debt.

That's government that works for Wall Street, but not for working people -- and I believe we should fight back.

Today, I am re-introducing the U.S. Territorial Relief Act, legislation that would provide Puerto Rico with a path to comprehensive debt relief.

Related Topic(s): Bankruptcy; Debt; Hurricanes; Legislation; Puerto Rico Devastation; Relief, Add Tags
Add to My Group(s)
Go To Commenting
The views expressed herein are the sole responsibility of the author and do not necessarily reflect those of this website or its editors.