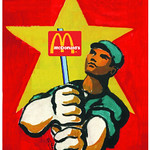 I last saw Vietnam in 2001. Back then, Saigon had no American fast food joints save a Kentucky Fried Chicken. Long-term foreign residents were few, and mostly confined to the Phạm Ngũ Lão area. There were no foreign stars in the just-established professional soccer league.

Now in Saigon, there are 20 KFCs, eight Burger Kings and six McDonald's, with one across the street from where I used to lived, five miles from downtown.

In December of 2007, an Afro-Brazilian soccer player, Fa'bio dos Santos, changed his name to Phan Văn Santos and became Vietnamese. This, in a country where millions had risked death or imprisonment trying to get out not too long before. In 2008, Santos was on Vietnam's national team in a friendly match against, um, Brazil! Santos on his new status:

I am very happy to become Vietnamese. The new citizenship will help me greatly in my career and maybe help the national team as well. I have been living and working in Vietnam for six years. I think my decision was the right one, even though it was very difficult. To my surprise, my parents support my decision. When I return to Brazil in the future, I will be a guest, not a citizen" Sometimes I felt sad because I had to give up my Brazilian citizenship. But my becoming Vietnamese is God's idea.

Since 2003, the leading scorer in the V.League each year has been foreign, with Nigeria, Argentina, Brazil and the Republic of Congo all represented. Nigeria-born Hong Vũ Samson became a naturalized Vietnamese in 2013, the year he won his first scoring title. Samson still has very intimate ties to his homeland, however. In a 2016 article, Thanh Niên [Youth] relates:

A surprising thing about Hong Vũ Samson is that he has two wives, one Nigerian and one Vietnamese (living in Ho Chi Minh City). Fortunately, both of his wives get along. Many times, his Nigerian wife has come for a visit, and Samson takes both of his wives, plus his many children, out. They all eat and drink happily to together.

Netherlands-born Danny van Bakel is now Nguy...n Van Bakel. Serendipitously, "Van" is a common middle name in both Vietnam and Holland. The star defender for Thanh Hoa' has just one wife, a Vietnamese.

Vietnamese-language proficiency is clearly not required for citizenship, for neither Hong Vũ Samson nor Đinh Hong Max can speak Vietnamese. Palestinian Saleem Hammad, however, can handle the language almost like a native, with a solid Hanoi accent. Arriving in 2011 on a university scholarship, Hammad has become a familiar face on television, having co-hosted several episodes of S Việt Nam, a popular domestic travel show. Viet Nam News quotes Hammad:

Việt Nam was a strange country for me at that time. After my family knew that I would have an opportunity to study here, everybody encouraged me. They told me that it was a country where its inhabitants worked very hard and they were very courageous. They had won against invaders to bring independence to their country. It is also the dream of the people of Palestine.

Handsome and tall, Hammad has also found regular work as a model. Foreign models are huge there. Though white skin and blonde hair are especially in demand, Yeannie Maya Aitkins of Sierra Leone has also landed a few gigs.

On TV and in advertising, then, the foreign has become a regular feature. In 2014, an overweight and listless Kelly Clarkson waddled through "A Moment Like This" to an indifferent audience at the Miss Vietnam pageant. Many Vietnam Idol contestants sing in English. South Korean soap operas and K-Pop have been popular since 2000.

Saigon now has a budding black neighborhood. On December 31st, 2015, Vietnam Express reported that in Gò Vấp, there's an apartment complex with many Africans, up to ten in a room. A handful of restaurants were frequented by Africans, and there's a nightclub that had become notorious for loud music late into the night, with fights erupting sporadically. Natives of Ghana, Algeria, Nigeria and Cameroon, etc., many Africans in Saigon were illegals. Most were poor. Vietnam Express quoted a Vietnamese waiter:

I've worked here for three months already. They spend very modestly. I've never been tipped anything by these foreigners. Even with change of 1,000-2,000 dong [4-8 U.S. cents], they won't leave it.

Mostly poor, ignorant of the language and without many social contacts, how do non-soccer playing Africans survive in Vietnam? Some buy factory rejected, irregular clothing to sell back home. A few marry locals and open businesses. An allAfrica article from 2009 reveals another mean of survival:

Related Topic(s): Totalitarianism; Vietnam, Add Tags
Add to My Group(s)
Go To Commenting
The views expressed herein are the sole responsibility of the author and do not necessarily reflect those of this website or its editors.