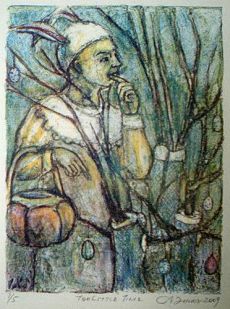 The Importance of Thinking Justly
(Image by Akemi Ohira)   Details   DMCA
With Impeachment dividing us, 48% for Trump vs. 48% for our Constitution, round two is in limbo America, in abeyance.

America's journey has again run headlong into a great uncivil directional tug of war between the titans of stalemate and progression: The Right Guard, Senate Majority Leader Mitch McConnell vs. the Queen of democracy, Speaker Nancy Pelosi.

Only the foolhardy would underestimate the unscrupulous bias of the former, or the tactician tenacity of the latter.

Only an imperious chess player broadcasts his next move, believing sixty-five million journeymen will withdraw in submission after he, Castling to protect his king, to cover up the defensive wall of willingly rented plodders plotting for Corporatism, Trumpism and Communism's wannabe champion, Vladimir Putin casting Homeland Security toward violence.

At this low ebb in America's journey, each needs to listen to the still voice within to accept the impeachment of a third president.

After all, before 20 January 2017, Mitch McConnell, smirking proudly, was forecasting one term for Obama, refusing a SCOTUS garland for Garland and arguably paving a yellow streak path, inciting the riotous Don to forbid his courtiers: staff, cabinet and executive branch to respond to Congressional subpoenas - thus empowering Trump's American Carnage with, Get over it Mick Mulvaney, let Ukraine eat cake Steve Mnuchin and Sonny Perdue's climate crisis welcome mat, giving climate scientists a thirty-day-notice for Kansas or, journey on.

With a well-placed Bill Barr firewall to justice, McConnell's senate largely ignored Robert Mueller's call to Congressional action - albeit in 2017 Charlottesville, America's journey was both witness and target of invading white supremacists, with the bigotry gauntlet thrown at America's Constitution, by an, I think there's blame on both sides American president.

Too many memories, or myths, blind us to the truth of change, believing less in our deductive reasoning than a forked tongue comparable to believing Ukraine hacked our 2016 election because, Putin told me so.

Although not an Evangelical Christian, I am an older Caucasian anti-abortion Roman Catholic Italian-American who believes in a woman's right to choose, more than in a president who, Mark Galli's Christianity Today strongly suggests is a, profoundly immoral specimen who, should be removed from office for his violation of the Constitution. So, Family Leader Bob Vander Plaats, who comes to your mind when Better Angels warn, Beware of the false prophets, who come to you in sheep's clothing, but inwardly are ravening wolves?

What insider Ivanka sees as energized, is more antagonistic display of someone confused about his role in, vengeance is mine saith the Lord. Nonetheless, an impeached Trump is a far greater threat, for bullies target the most vulnerable: immigrant children, Ukrainians under attack by Russia and refugee families seeking asylum, yet not even the honored dead are safe from one so unaccustomed to being held accountable for, conduct unbecoming.

Pondering Thomas Paine's 19 December 1776, these are the times that try men's souls, reasonable men and women must revolutionize summer soldiers and sunshine patriots, by example, knowing tyranny, like hell, is not easily conquered.

Speaker Pelosi has long reminded me of my grandmamma who, over my five-year-old head, in one stroke of a garden hoe, decapitated a snake who dared to slither too close to me in her vegetable garden. I couldn't eat tomatoes until graduate school.

Better we emulate our Speaker seeking a balance between denying confessed Trump enabler McConnell any quick and easy out, and knowing when to fold them than allowing one-dimensional debate questions to diminish America's journey into Wine Cave crystal ambiance imbibing, and past wins and losses smothered in the cheap shots of hyperbolic rhetoric, instead of substantive answers for those not benefiting from Trump tax cuts.

Both Right and Left feel lost in the quagmire of our own making, but whether our 2016 vote was motivated by the fear that time itself is replacing the, great way of lifeof holy white protestant values - or embracing an uncertain future with a Johnny-come-lately commitment to stewardship for both planet and children, even if in an, end of days, both courageous and wise will now passionately pursue the excellence of reason over carnival, positive inspiration above angry tweets and defusing cultural wars with the harmony of loving kindness.

No matter how long America's journey, Gerrymandering, state voter purges and Citizens United remain our inglorious 21st century stain, but be assured, one person one vote, give me your tired your poor and equal means equal - our miraculous Exceptionalism.