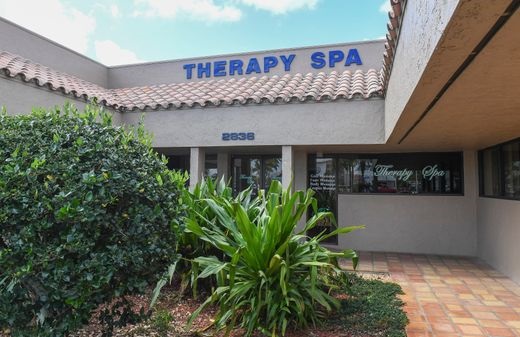 Expect more VIP heads to roll in Florida's statewide crackdown on a chain of "day spas" that provided their male clientele with sexual gratification instead of body massages. The arrest of hundreds of men, including three wealthy retirees living on Florida's "Treasure Coast," followed quickly on the heels of a decision by U.S. Judge Kenneth Marra of the U.S. District Court for the Southern District of Florida in Miami that the 2007 non-prosecution agreement plea deal agreed to by then-U.S. Attorney Alex Acosta, Assistant U.S. Attorney A. Marie Villafaña, Palm Beach County state's attorney Barry Krischer, and attorneys for Palm Beach billionaire Jeffrey Epstein was "illegal." Donald Trump appointed Acosta as his secretary of labor, a position over which Acosta is responsible for identifying breeches of federal law against human trafficking, including sexual exploitation of foreign or domestic laborers.

Dozens of underage female victims of Epstein were never even informed about the sweetheart plea deal that put Epstein in jail only during the evenings and providing him with a private wing of the Palm Beach County Stockade, where he was permitted overnight female visitors. It is now known that Epstein's high-priced lawyers, who included Alan Dershowitz, Kenneth Starr, George W. Bush envoy for North Korea Jay Lefkowitz, Jack Goldberger, Roy Black, and former U.S. Attorney Guy Lewis, helped arrange the agreement, which immunized Epstein and his associates from any future state of Florida, New York County (Manhattan) (thanks to the intensely-corrupt District Attorney Cyrus Vance, Jr.) or federal indictments.

The arrests of the three U.S. oligarchsNew England Patriots owner Robert Kraft; corporate buyout czar John Childs of Boston-based J.W. Childs Associates; and former Citigroup president and chief operating officer John Havens, the current chairman of Napier Park Global Capital, a Citigroup spinoffin addition to some 160 others, is said to have followed a six-month long multi-jurisdictional statewide investigation of a chain of sex massage parlor masquerading as "day spas" that employed Chinese female U.S. work visa holders as sex workers. WMR can report that Treasure Coast police departments, reminded of the outrage committed by Acosta by a recent three-part series published by The Miami Heraldabout the Epstein deal, decided to "declare war" on the sex trafficking trade and the involvement in it of big shots who live on the Treasure Coast, including Palm Beach, the location of Donald Trump's Mar-a-Lago billionaires' private club.

Arrested along with the scores of "johns" was the female owner of a few of the day spas, Hua Zhang. Also arrested were Lanyun Ma of Orlando, Liyang Zhang of Pompano Beach, Junhua Dong of Vero Beach, Yan Xu of Sebastian, Yaping Ren of Orlando, and Kenneth Zullo of Sebastian. They were charged with crimes ranging from human trafficking and deriving support from proceeds of prostitution to racketeering and engaging in prostitution. The female victims of the sex trafficking operation appear as "Jane Does" in law enforcement documents.

Kraft, Childs, and Havens were charged with soliciting prostitution from Zhang's "Orchids of Asia" spa in Jupiter, Florida. The spa employed several Chinese, South Korean, and Thai women who applied for and received temporary U.S. "J visas" for work in the United States they were told involved legal activities. Zhang and his associates held the women's Chinese passports in an indentured sex slave operation.

Interestingly, one of those charged in the Florida sting is Peter Sedlak of Solon, Ohio, the president of Gigi's Playhouse in Lakewood, Ohio. The organization is billed as a "an achievement center serving children and adults with Down Syndrome." Another charged is Robert Wessel, the president of the Boys & Girls Clubs of Indian River County, Florida. Wessel was arrested for solicitation at another spa, East Spa, in Vero Beach. Also arrested was Johnny DelPrete, the boyfriend of LPGA champion, Jessica Korda.

Florida state corporation records reveal that Orchids of Asia, Inc. was incorporated by Zhang in 2012. Zhang also incorporated Parana Studio LLC and Harana Zhang Production LLC, both of Orlando; Yinghua LLC of Palm Bay, Florida; Aquaware LLC of Lithia, Florida (the purpose for which, before it was dissolved in 2018, was to "develop and sell software for simulating hydrodynamics and water quality"); Hua Sunshine Massage, Destin, Florida; Dreaming Farm Inc. of Arcadia, Florida; and Sure Power USA Inc. of Clearwater, Florida.

Zhang is also listed as CEO, president, chairman, and treasurer of Engage Mobility, Inc. with an address of 15C, China Merchants Tower, No. 1166 Wanghai Road, Nanshan District, Shenzhen, Guangdon, China. The firm's registered U.S. agent is VCorp Services of Davie, Florida. Engage Mobility changed its name in 2013 from MarketKast, Inc. of Orlando. MarketKast's incorporating officer and registered agent was listed as James Byrd of Orlando. In 2017, the registered agent was changed to VCorp Services.

Zhang also appears as a director of Cusimax Brands Inc. of Tampa, Florida, with a headquarters address of Yuefeng Town, Jin An No.17, Lane 2, Guanwei St., Fuzhou, China. The firm's Florida incorporation document merely states it may engage in "any and all lawful business." Some of the spa network's businesses and residences are in the Tampa Bay area, headquarters for two major U.S. military commandsthe U.S. Central Command and U.S. Special Operations Commandboth located at MacDill Air Force Base.

Also raided and shut down by police was East Spa of Winter Park, Florida, incorporated in 2017 as East Spa & Massage LLC with the manager listed as Zhenhai Liu.

Another spa targeted by police was AA Massage of Winter Park with a mailing address of Palm Bay, as well as Rainbow Spa of Orlando. AA Massage Florida LLC was registered by Yongzhang Yan with an address in Sebastian, Florida. Rainbow Spa Florida LLC lists a mailing address in Kissimmee, Florida. Even a somewhat cursory examination of the corporation records of the massage parlors reveals interlocking directors and a series of incorporations, dissolutions, and re-incorporationsmoney laundering artifices for which Trump and his associates have become infamous and subject to multiple federal law enforcement investigations.

The Treasure Coast sting that nabbed three billionaires spread to Louisiana, where the law enforcement roundup nabbed someone with political connections. Jerod Prunty, an aide to U.S. Representative Clay Higgins (R-LA), was arrested on two charges of pandering at one of several Lafayette Parish massage parlors targeted by police. They included Angel Massage Parlor Inc. (Hou Qin Tang, President) and Harmony Zen Spa Inc. (Chang Su, President). Prunty apparently shared his residence with one of the massage parlor workers Pingjuan Xia, 36. The same address appeared on both of their arrest reports. Prunty was described as the director of district operations for Higgins. Prunty has since resigned. Two other massage parlors, for which there are no corporation records in Baton Rouge, were also closed down. They are Golden Spa and AA+ Massage.

The recent massage parlor sting also saw the arrest of four people for prostitution in the Dallas area, with some sixteen female sex workers being treated as trafficking victims by law enforcement. The massage parlors raided include Passion X, Jasmine, and Blue Star/Charming, all located in a warehouse in an industrial section of Dallas, just off Stemmons Freeway. Little is known about the firm, New York Company, that owns the massage parlors. Arrested in the sting was Josip Maric, the assistant basketball coach at Texas A&M University-Commerce. Maric was fired after the arrest. A video screen-capture photograph from inside Passion X shows Chinese-made products on the makeup table.

Related Topic(s): Arrest; Blackmail; Charged; Female; Human Trafficking; Immigration; Investigations; Law; Media; Merchants; (more...) People; Police; Security; Sex; Workers, Add Tags  (less...)
Add to My Group(s)
Go To Commenting
The views expressed herein are the sole responsibility of the author and do not necessarily reflect those of this website or its editors.