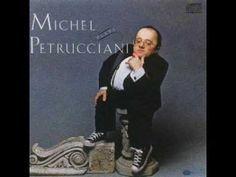 Copyrighted Image? DMCA
Michel Petrucciani (French pronunciation: "[miʃɛl pɛtʁutʃani]; Italian: [petrutˈtʃani]; 28 December 1962, Orange, Vaucluse, France -- 6 January 1999, New York City, USA) was a French jazz pianist. Afflicted from birth with osteogenesis imperfecta, a genetic disease that causes brittle bones and, in his case, short stature, he became one of the most accomplished jazz pianists of his generation, despite having arms which caused him pain.

Related Topic(s): France; Jazz; Jazz, Add Tags
Add to My Group(s)
Go To Commenting
The views expressed herein are the sole responsibility of the author and do not necessarily reflect those of this website or its editors.

A Few Facts Regarding Religion and Scientists

Loving Bernie, But Getting Real

Noam Chomsky: "America is Not a Democracy (and Was Never Intended to Be)"

Noam Chomsky: "Why You Can Not Have a Capitalist Democracy"