Click Here to Remove All Ads
(Occupied)  Plaza de la Republica ,  Mexico City,  Distrito Federal
3:45 pm local time,  --BRIEF
Mexico City's nascent #yosoy132 student movement has decided to occupy the country's grand plaza to the country's 1910-1929 democratic government.  They's erected tents and a large under-tent field headquarters there.  Local police in the Federal District's island of democracy don't seem to mind.  Earlier today,  they were overheard by this reporter talking with the movement's security team about providing protection against any hostilities.
At approx. 2:30 in the afternoon,  the movement's intelligence team received and posted incoming evidence of ballot fraud in yesterday's election.  Translated,  the announcements read:
"Evidence of FRAUD
3,000,000 ballots pre-marked for the PRI,  found in El Paso,  Texas.
132,000 found in Yajalon,  Chiapas,  before the election,  marked for the PRI
157,000 found in Oaxaca (Hajuapan de Leon) before the election,  marked for the PRI
Only 22,000 ballots distributed to polling places in the Federal District,  for individuals [who wished to vote at general polling places instead of their locally assigned polls]." 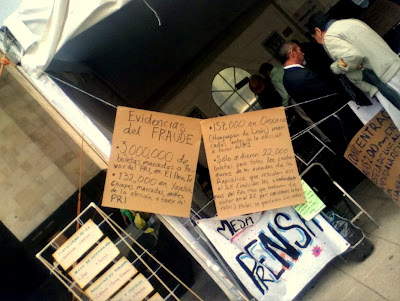 (Image by Unknown Owner)   Details   DMCA
From #YoSoy132-- Republica-- 2 Jun
The Federal District has approx. 18 million residents,  many of whom are registered in their birthplaces but expected to vote in the Federal District.  Student leaders said they believed hundreds of thousands were denied the vote.
The above is in addition to growing evidence that widespread vote-buying occurred in the elections,  and the suggestion that preliminary "quick count" results and a preliminary electronic count displayed signs of computer tampering.
The student leaders maintained that they were a non-violent movement,   non-partisan,  and dedicated to securing free elections and democracy in Mexico.  A general assembly is planned for 8PM tonight.

Kenneth Thomas works as an IT consultant and techologist and lives between Nashville, Ghent, Prague and Mexico City. He speaks German, French, Spanish, some Dutch of the Flemish variety, a smattering of Hebrew and other languages, and when (more...)
Related Topic(s): Elections; Fraudulent Elections, Add Tags
Add to My Group(s)
Go To Commenting
The views expressed herein are the sole responsibility of the author and do not necessarily reflect those of this website or its editors.