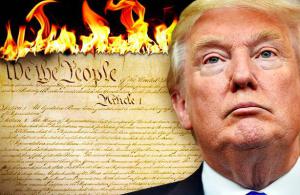 Trump versus the US Constitution
(Image by ramonasvoices.com)   Details   DMCA

According to experts, President Donald Trump's continued ownership interest in the Trump Organization means that he is in violation of the U.S. Constitution's Emoluments Clause, which prohibits the president from personally benefiting from actions taken by foreign governments and their agents. Will media hold Trump accountable for this impeachable offense or will they normalize his flagrant violation of the supreme law of the land?

U.S. Constitution Prohibits The President From Accepting Emoluments From Foreign States Without The Consent Of Congress. The U.S. Constitution's Article I, Section 9 contains a broad provision to prevent foreign governments from corrupting U.S. government by giving benefits to federal officeholders:

No title of nobility shall be granted by the United States: and no person holding any office of profit or trust under them, shall, without the consent of the Congress, accept of any present, emolument, office, or title, of any kind whatever, from any king, prince, or foreign state. [U.S. Constitution via Cornell University Law School Legal Information Institute, accessed 1/19/17]

Merriam Webster Definition Of Emolument: "The Returns Arising From Office Or Employment Usually In The Form Of Compensation Or Perquisites." [Merriam Webster, accessed 1/19/17]

Legal Ethics Experts: "The Best Reading Of The Clause Covers Even Ordinary, Fair Market Value Transactions That Result In Any Economic Profit Or Benefit To The Federal Officeholder." The clause does not just cover "sweetheart deal[s]" because "emoluments are properly defined as including 'profit' from any employment, as well as 'salary,'" meaning "it is clear that even remuneration fairly earned in commerce can qualify," according to an analysis published by the Brookings Institute. It was authored by legal ethics experts Norman Eisen, a former Obama administration ethics attorney and current chair of Citizens for Responsibility and Ethics in Washington; Richard Painter, a former Bush administration ethics attorney and current vice chair of Citizens for Responsibility and Ethics in Washington; and Laurence Tribe, a leading expert on constitutional law and professor at Harvard University Law School. [Brookings Institute, 12/16/16]

Violating The Emoluments Clause Is An Impeachable Offense. During the 1788 Virginia Ratifying Convention, Virginia Gov. Edmund Jennings Randolph, who later served as the United States' first attorney general, said of a president who violates the clause, "If discovered he may be impeached":

"Virginia Governor Edmund Jennings Randolph addressed the issue directly during a Constitutional debate in June 1788, noting that a violation of the provision by the President would be grounds for impeachment. (Randolph was also a delegate to the Constitutional Convention.)

"There is another provision against the danger mentioned by the honorable member, of the president receiving emoluments from foreign powers. If discovered he may be impeached. If he be not impeached he may be displaced at the end of the four years. By the ninth section, of the first article, 'No person holding an office of profit or trust, shall accept of any present or emolument whatever, from any foreign power, without the consent of the representatives of the people...' I consider, therefore, that he is restrained from receiving any present or emoluments whatever. It is impossible to guard better against corruption." [ThinkProgress, 11/25/16]

The Framers Even Considered A Constitutional Amendment Mandating Loss Of Citizenship For Violators Of The Clause. Eisen, Painter, and Tribe explained in their Brookings report that "the Clause was seen as so important that the Eleventh Congress considered, as a proposed Thirteenth Amendment, a provision stating that a person would lose his or her citizenship by accepting an office or emolument from a foreign power" (citations removed):

Media Matters for America is a Web-based, not-for-profit, 501(c)(3) progressive research and information center dedicated to comprehensively monitoring, analyzing, and correcting conservative misinformation in the U.S. media.
Related Topic(s): Constitution In Crisis; Emoluments Clause; Trump Illegality, Add Tags
Add to My Group(s)
Go To Commenting
The views expressed herein are the sole responsibility of the author and do not necessarily reflect those of this website or its editors.