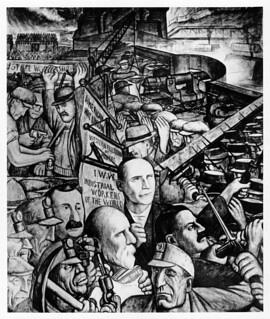 In a highly connected global economy, driven more and more by automation and digital tools, keeping track of economic trends is becoming more important for managing everyday life. In my first installment of the series, Managing Everyday Life: Why the Working Class Should Read the Business Press (OPED NEWS, January 2, 2016), I argued that working people should read the business press regularly to gather real-time information as a guide to make everyday decisions. But after you have read the news, how do we connect the issues of the day to our everyday lives?

The reality is that income does not determine one's social class. In a modern capitalist society like the United States, social class can be clearly understood by looking at one's relationship to capital. Capital takes on a number of different forms, for example, money waiting to be invested, commercial grade tools used in places of industry, or good old-fashioned, wealth-bearing assets such as stocks or bonds.

A person or group that owns capital falls into the social class called the capitalist class. Capital is wealth-producing and can be used to make products, provide services and grow income that can benefit many people beyond the direct owner.

The capitalist class is the smallest (in terms of population) that participates in economic and social life. In the U.S., the capitalist class makes up about 20% of the population (Wall Street's Think Tank: The Council on Foreign Relations and the Empire of Neoliberal Geopolitics, 1976-2014, by Laurence H. Shoup, 2015). An example of a member of the capitalist class is the Walton Family that owns Walmart. According to an article in Scientific American Magazine ("Economic Inequality: It's Far Worse Than You Think", March 31, 2015 ), the Waltons have more wealth than 42% of the wealth of all working families in the U.S.

The next social class is the petty capitalist class. This social class is highly fluid and is broadly exposed to the ups and down of the economy. All the while, affected by the motion or rhythm within capitalism which is driven by the big capitalists who dominate ownership of assets and wealth (not unlike the Waltons). The petty capitalist class owns modest, wealth-producing capital and its members tend to be heavily concentrated in the service sector. This class includes the so-called "Mom-and-Pop Shop" owners but is not limited to them. Fully 52 percent of those that comprise this class are owners of home-based businesses and the remainder consists of small restauranteurs, beauty shop owners and car mechanic shop owners, as well as a broad range of other small-business people that provide services. Approximately 75 percent of petty capitalists do not have employees and over 50 percent of these small businesses fail within 5 years ("16 Surprising Statistics about Small Business", Forbes Magazine, September 9th, 2013). This high turnover among petty capitalists is the result of the pressure of competition that comes from dominant capitalist forces.

The vast majority of people around the world do not own capital in any form whatsoever. The folks that do not own capital must sell their Labor-Power (i.e., time, energy and skills) in the market in exchange for money to pay for their basic needs (means of subsistence such as food, shelter, etc). This class is called the working class.

In the United States alone, over 155 million individuals and 3.6 billion (or slightly more than 50%) of the world's population fit into this category (CIA World Fact Book). There are numerous ethnicities (based on historical factors such as culture, language, geography, religion and other factors), occupations, incomes, and other factors that are evident in the making of the working class. However, what connects them all is that they all must work for a wage.

There has been much talk about a new class some are calling the Precariat. The economist Guy Standing brought attention to the Precariat in his 2014 book called the Precariat: The New Dangerous Class. This class makes up a growing segment of the population that has no relationship to capital and has no skills to sell in the labor market. Examples include the homeless population, prison population, people that receive government disability payments and huge majorities around the world that for different reasons are forced to subsist way below the basic minimum requirements of social life. According to some estimates, 40 percent of the unemployed in the U.S. have stopped looking for work, accounting for millions of people that have no stake in the capitalist system ("40 Percent of Unemployed Have Quit Looking for Jobs", CNBC, May 20th, 2015).

Now that we have established the critical features of those social classes most relevant to our lives, we can look at a simple example of information that appears in the business press, the impact of which we can apply to our everyday lives. A headline in NPR read "With Oil Prices Languishing, Shell Reports 80 Percent Drop In Earnings", February 4th, 2015. How do we try to make a connection between this headline and our everyday lives? It is important to understand and begin with your social class as the real starting point and to understand what is in your real (objective) class interest, as opposed to the personal (subjective) feelings and views you might hold about where you think you fit in the class system in society.

For the capitalist class, lower oil prices mean lower profits that affect their asset portfolio and/or investments in domestic and global industries that are affected by lower oil prices (e.g., profits borne from owning a trucking company that hauls gasoline in tanker trucks up the highway to service stations that line transport arteries nationwide). Although members of the capitalist class might suffer financially from falling oil prices, they have the capacity to sustain themselves because of their far-flung, diversified business activities and accumulated wealth. The larger and more diversified their assets and wealth pool, the easier it might be to decide to sell off investments in oil and reinvest in assets or industries that are more profitable. In this way, the capitalist class can avoid some of the negative effects that come with falling oil prices without having to lower their overall standard of living.

For the working class and majority of the petty capitalist class, it is a different story. Lower oil prices will benefit these two classes by lowering prices for fuel and reducing the cost of travel in the short term. However, lower prices in the long term mean that the dominant capitalists will tend to reduce investment in operations that produce goods and services, with a fall in employment that will directly affect working class people. The point to consider here is that capitalism functions in a counterintuitive or contradictory manner. With lower prices comes falling profits which force businesses to cut back production and lay off workers. Workers will definitely find it difficult to meet their obligations: food, shelter (rent/mortgage), loan payments, tuition, medical and health care obligations.

The point is that laid-off workers have less disposable income that could be spent in restaurants and shops, sinking the petty capitalists deeper into financial uncertainty. Our economy is very complex, intertwined and has a delicate ecosystem that needs it to have strong member components to function optimally. In the United States, approximately 70 percent of the economy is consumer-driven, and it is the broad mass of working class people that do most of the spending on regular consumer goods that the capitalists produce. Capitalists depend on the working class; the working class needs access to the goods and services that capitalists produce or finance. It matters to know and understand when the capitalists are hitting hard(er) times.

Reading the business press is vital to understand the dynamic and topsy-turvy social environment we live in; the business press provides real data to guide us in making decisions that affect our lives and how we think about planning for the future, but knowing your social class is equally important. There is a tendency to argue that there are no social classes in American society because of the role that individualism plays in shaping how people think about themselves in the world around them. This very personal or subjective view does not change the fact that under capitalism our class position begins with our relationship to capital --- our connection to owners of the wealth that hire labor and produce the goods and services -- and how, as workers, we must sell labor-power in exchange for wages. Workers have only their labor-power to sell for a wage because this is what happens when wealth is owned and controlled by a handful who decide, when, where and how to invest. The reality is that changes in the industries and markets do not affect everyone equally. Knowing your social class while monitoring the daily changes in the industry will more effectively provide the tools to make everyday decisions in light of the daily challenges that confront the working class.

Related Topic(s): Class; Connecting; Economy; Individualism; Markets; Money; Planning; Social Democracy; Social Networking; Work, Add Tags
Add to My Group(s)
Go To Commenting
The views expressed herein are the sole responsibility of the author and do not necessarily reflect those of this website or its editors.