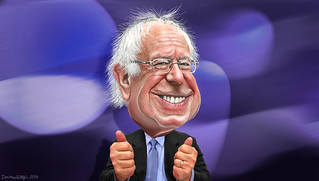 In 2008, Hillary Clinton -- on her way to losing the Democratic nomination -- won nine of the final 25 nominating contests. In 2016, she may well -- despite being treated as the likely winner of this year's Democratic primary by the mainstream media -- win only seven or eight of the final 25 state primaries and caucuses.

If you're wondering how Clinton could perform worse in the second half of the election cycle in 2016 than she did in 2008 and still be in a position to win, there's a good explanation for it that goes beyond the fact that the neck-and-neck Democratic primary race we've had for over two months started with a brief but solid run for Clinton. In 2008, both Democratic candidates were sanctioned by Party elders, so super-delegates were free to pick whoever they thought was the stronger candidate without fear of reprisal. In 2016, super-delegates are expected to go with Clinton even if the insurgent Sanders has clearly shown himself, by mid-June, to be the stronger general-election candidate in terms of both head-to-head match-ups with Trump, favorability ratings among independent voters, and performance in the second half of the nominating season.

Super-delegates will fall into line -- the thinking goes -- not because Clinton is a strong general-election bet, or liked by many people, or a real spokeswoman for the ideology of the Party base, or able to win independents, or nearly the same candidate in May that she was in February, or capable of winning over her current Democratic opposition the way Obama did after the primary in 2008, but because Democrats in Washington have made clear that any super-delegates who back the now-stronger horse in Philadelphia this July -- Sanders -- will be ostracized from the Party. Fear, then, is what could make Clinton the Democratic nominee even if (a) super-delegates are officially charged with voting for the strongest general-election candidate, and (b) Clinton goes on a historic losing streak in the back half of the primary season election calendar.

But all that's horse-race nonsense, and won't matter very much to political historians looking back at this period in American history from the vantage point of, say, 2116.

They won't care that in 2008 Hillary Clinton won Kentucky by 36 points over then-Senator Obama, but in 2016 only managed to beat a 74-year-old independent socialist with no super-PAC and exponentially less name recognition by 0.4 percent -- despite her making 11 trips to the state, having a much larger advertising budget, and daily receiving on-the-stump aid from a popular former President who won Kentucky twice.

We used to say that Hillary Clinton, for all her flaws, handily wins closed Democratic primaries.

Well, we can't say that anymore.

But it doesn't really matter in the long run.

And it won't matter in 2116 that Democratic Party elders and particularly former Goldwater-Girl Clinton are so enamored by the idea of a Nixonian strongman that they fundamentally misunderstand the relation of Bernie Sanders to Sandersism. They believe he can direct the movement he lent his name to in the same way Clinton believes progressive Democrats will fall into line no matter how much she disrespects them, but they're wrong. And Clinton is wrong to think she doesn't owe Sanders and his political allies the same visibility and authority in her prospective Administration that she had in Barack Obama's; she's also wrong to think that the benefit of rules-fixing at the state Democratic convention in Nevada is worth the November votes it's going to cost her -- especially given her huge delegate lead, which allows her to be a magnanimous rule-follower.

But all that's only relevant to the Clinton-Sanders and Clinton-Trump horse-races.

Is it a "horse-race" issue that the DNC is publicly representing itself as a "neutral" arbiter in the Democratic primary, and publicly stating that super-delegates don't vote until July, but according to NBC is in fact "colluding" with the Clinton campaign "behind the scenes" to begin -- with millions of votes yet to be cast -- the transition of the DNC from an independent operation to one run by Hillary Clinton? No, for the fact that there's "nothing neutral" about the DNC right now (as David Chalian of CNN put it last night) merely tells you something about the ethics of the Democratic Party in 2016.

After all, this is a Party that has, in 2016, given Debbie Wasserman Schultz a job.

But not only isn't this an article about horse races, it's also not about 2016. It's certainly not about the fact that Hillary Clinton is doing everything she needs to be doing right now to lose the fall general campaign -- even as she sets up Bernie Sanders to be the eventual fall-guy for her own failures.

No -- this article is about the future.

Related Topic(s): Bernie Sanders 2016 Presidential Candidate; Democrats DNC; Hillary Clinton; Wasserman Schultz-Debbie, Add Tags
Add to My Group(s)
Go To Commenting
The views expressed herein are the sole responsibility of the author and do not necessarily reflect those of this website or its editors.

Clinton Delegate Lead Down to 194, Even as Dramatic Miscounting of Delegates

Sanders Can Win. Here's Why.

Bernie Sanders Is Currently Winning the Democratic Primary Race, and I'll Prove It to You