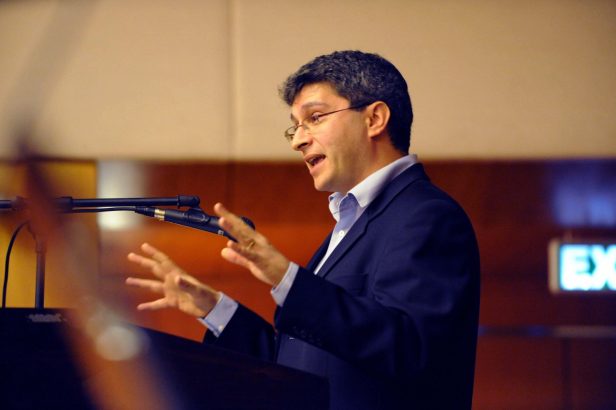 I closely follow liberal Zionists because they are the power inside the Democratic Party, witness the fact that Chuck Schumer will be addressing J Street's conference later this month for the first time. What follows is a liberal Zionist argument I believe we're going to be hearing a lot of: the only thing we need to do to end the Democratic Party's disaffection with Israel is get rid of Netanyahu and Trump.

Jonathan Rynhold is a poli-sci professor in Israel and a researcher at a right-wing Israeli think-tank. His piece "The Special Relationship" was picked up by the liberal Israel Policy Forum and says that Americans feel a religious and "pioneering" identification with Israel, and Democrats remain "firmly" in Israel's corner, despite the publicity given to two supporters of the Boycott campaign in Congress. "[O]nly a minority of Democrats have a negative view of Israel." Half of Dems in a recent survey (from a neoconservative source) see the Boycott, Divestment and Sanctions campaign as anti-Semitic.

Rynhold's big challenge is that since 2014, the "pro-Israel margin" among Democrats (whether they have more sympathy for Israel or the Palestinians) has been virtually wiped out. It "has dropped by a whopping 25 percentage points... Such a sharp deterioration is unprecedented." In the Pew survey below, that margin is in low single digits. Gallup puts it in the low-teens. 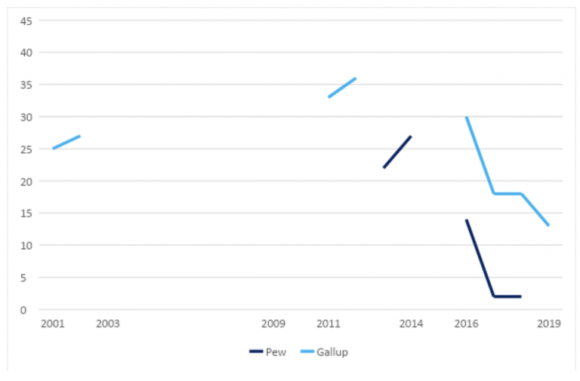 Democratic support for Israel over Palestine has been plummeting in the last five years.
(Image by Jonathan Rynhold graph.)   Details   DMCA

Rynhold says the progressive American distaste for Israel is largely the product of Trump and Netanyahu making the issue partisan. He all but ignores human rights concerns. He says settlements are an issue but hardly mentions the Gaza onslaught of 2014 that seems to have been crucial in shifting progressive attitudes. He does not state that Israel killed more than 2,000 people including 500 children then. Bernie Sanders slammed the Israeli response as "disproportionate" and called for an even-handed policy.

Rynhold also leaves out the slaying of nearly 200 protesters at the Gaza fence in the last 18 months. Alexandria Ocasio-Cortez once called that a "massacre." Rynhold never mentions the word "apartheid." But even Jake Tapper at the 92d Street Y says that it is hard to speak of Israel in neutral terms these days, and "apartheid" is a fair charge when Israel's government "has absolutely no intention of ever giving full rights to Palestinians in the West Bank, which is the definition of apartheid."

He also says Democrats don't like Israel because Republicans like Israel, not so much because of anything Israel is doing.

He says Dems are getting more dovish generally. Again, nothing about Israel's conduct.

"Democrats' attitudes regarding policy towards Israel derive from their underlying dovish attitudes to American foreign policy in general. In the new Millennium, Democrats have become increasingly skeptical about the utility of military force and increasingly hopeful about the promise of diplomacy."

And Dems are secular, and Israel's right wing government is exacerbating seculars' alienation:

"Americans of 'no religion' have become the largest 'religious" group among Democrats and of all major ethnic and 'religious' groups their support for Israel has been the lowest. This means that for Democrats the special relationship increasingly rests on Israel's identity as a liberal-democracy. Against this background, Netanyahu's banning the entry into Israel of [Reps. Rashida Tlaib and Ilhan Omar], to appease Donald Trump, was another own goal, which, in a highly unusual move, was criticized publicly by AIPAC."

Rynhold offers an Rx to fix the Democrats' problem. First, Israel must take some largely symbolic steps on human rights.

Philip Weiss is a longtime writer and journalist in New York. He co-edits a website on Israel/Palestine, Mondoweiss.net, which he founded in order to foster the movement for greater fairness and justice for Palestinians in American foreign policy. He is currently working on a novel about the US in Australia during WW2.
Related Topic(s): AIPAC; Democracy Decay; Democratic Party; Democrats Progressive; Israel; Israeli Apartheid; Israeli Pressure On US; Sanctions; Zionists, Add Tags
Add to My Group(s)
Go To Commenting
The views expressed herein are the sole responsibility of the author and do not necessarily reflect those of this website or its editors.