Reprinted from popularresistance.org By Kevin Zeese and Margaret Flowers

After years of declining power and stagnant wages, workers in the United States are awakening, striking and demanding more rights. A Bureau of Labor Statistics report shows the number of striking workers is the highest since 1986. In 2018, 485,000 people went on strike, a number not exceeded since the 533,000 people in 1986, and 2019 will be even larger. Workers should be in revolt, as the Economic Policy Institute found workers have had stagnant wages for three and a half decades even though productivity is increasing.

This week we look at the origin of Labor Day, how workers are returning to those roots and the future for workers in the United States.

This is the 125th anniversary of Labor Day, which was declared in 1894 after the nationwide Pullman railroad strike led by the American Railway Union under Eugene Debs when 260,000 workers in 27 states participated. Federal troops were used to stop the strike and 26 people were killed. Six days after the more than two-month-long strike ended, President Grover Cleveland pushed legislation through Congress creating Labor Day as a conciliatory gesture to the workers.

Near the end of the strike, on July 4, Debs described the strike as the beginning of a conflict where "90 percent of the people of the United States will be arrayed against the other 10 percent." Six days later, Debs was arrested and, after his conviction was upheld by the Supreme Court, he served six months in prison for violating an injunction against the strike. When released, Debs started the Socialist Party, which built worker power in elections, resulting in many changes to the laws.

The Pullman Strike was part of a growing labor movement that won reforms such as ending child labor, the 8-hour workday, the right to unionize and Depression-era New Deal laws, which included many laws demanded by workers, the Socialist Party and the Progressive Party.

Since the 1947 Taft-Harley Act, which restricted worker rights, unions have been in decline with reduced members and rights. The Janus decision, which some saw as a fatal attack on public-sector unions, might be the low point, perhaps the darkness before the dawn, for workers in the United States. Workers are realizing that democracy requires unions and now 64% of people say they approve of unions, a dramatic increase of 16 percent over a record-low figure registered in 2009.

Janus seems to have focused unions on the need to rethink their approach, and so far unions who have moved to an organizing culture have not been hurt by Janus. In recent years, there has been an awakening with a wave of strikes such as the teachers' strikes in multiple states (California, Colorado, Michigan, New Jersey, Oregon, Pennsylvania, Tennessee, Washington, West Virginia, among others). There have also been recent strikes by healthcare and hotel workers in ten cities, grad students, farmworkers and Stop and Shop, National Grid and Steelworkers, as well as the largest strike of manufacturing workers in the Trump era, McDonald's, and even prisoners on stike in 17 states. WalMart workers threatened to strike and won increased wages.

Workers in the new gig economy also face challenges. When Uber and Lyft went public, it was bad news for drivers. While investors made billions of dollars, it created new "demands from investors for fare increases and further attacks on drivers, already grossly undercompensated." These drivers are contractors, not employees subject to minimum wage laws or the benefits of being an employee. The effective hourly wage of an Uber driver is less than what 90 percent of US workers earn. Drivers have begun to organize and strike to demand better wages and benefits.

It is time for a new era of worker rights, union organizing, higher wages, and worker ownership. Decades of mistreatment of workers are boomeranging and could make the next decade one of massive advancement by workers. 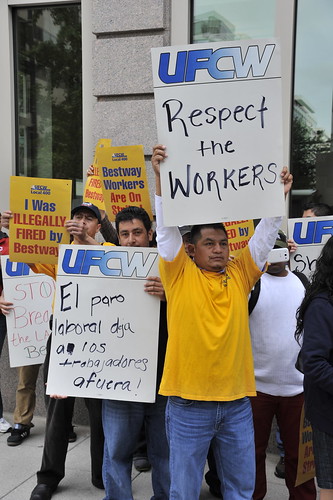 Kevin Zeese is co-chair of Come Home America, www.ComeHomeAmerica.US which seeks to end U.S. militarism and empire. He is also co-director of Its Our Economy, www.ItsOurEconomy.US which seeks to democratize the economy and give people greater (more...)
Related Topic(s): Labor Day; Workers, Add Tags
Add to My Group(s)
Go To Commenting
The views expressed herein are the sole responsibility of the author and do not necessarily reflect those of this website or its editors.