Let Us Venerate Our Enemies

(It's the Right Thing to Do) 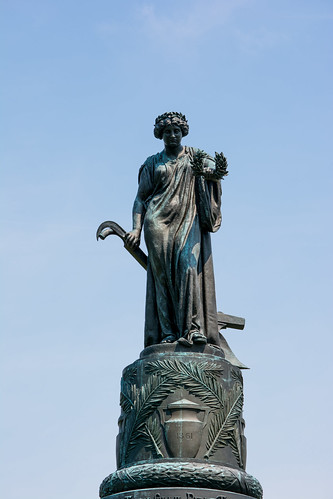 Let's imagine there's a fictitious country on our border, the government of which is committing unspeakable atrocities against its own people. And let us further imagine there is a steady stream of refugees attempting to cross over our border and into our country, so as to escape the horrors that await them, should they be unsuccessful in seeking asylum from our government. Is it not likely that the decent and fair-minded citizens of this country would demand that their leaders at least make a good-faith effort to rectify the situation in this living hell on our border? And is it so hard to imagine that our government under such circumstances might feel compelled by public outrage to plan a punitive expedition to liberate our neighbors and restore good government to their long suffering people? Of course not! We have seen all this played out, ad nauseam, throughout our nation's history.

So now we've reached the point in our hypothetical narrative where our president orders the military to draw up plans to invade this outlaw nation, and put a halt to their depredations. Such plans are duly and carefully laid out by the generals, with an eye toward pursuing a blitz campaign designed to "shock and awe" our enemy into suing for peace at the earliest opportunity. So far, so good.

It is now four years later, and at last our enemy has admitted defeat. The remnants of our exhausted, bedraggled, and mostly shoeless army occupy the key strategic points in the smoldering ruins of what was once the most dynamic and profitable agricultural juggernaut the world had ever seen. We have successfully freed nearly four million formerly beaten, maimed, and tortured human beings. To accomplish all this has cost the lives of 100,000 of our fellow citizens.

So what now? Where do we go from here? The answer to this is (or should be) painfully obvious, is it not? We must immediately set about casting bronze statues honoring the most bloodthirsty and ravenous of our enemy's military leaders, in commemoration of the relentless and wanton slaughter of our brave young soldiers. It just seems like the right thing to do, don't you agree?

"For they are jolly good fellows; and so say all of us!"

[Mark W. Bradley is a retired history teacher who lives in Northern California. He has been an antiwar activist since the 1960's, writing and marching against every American military adventure from Vietnam to the Iraq War. His satirical articles have appeared in numerous online publications throughout the United States, as well as in New Zealand, the UK, and the Netherlands.

Mark W. Bradley is a political satirist and retired teacher who lives in Northern California. He has published articles in OpEdNews, Buzzflash, Democratic Underground, Smirking Chimp, Scoop, Online Journal, and many other online (more...)

Related Topic(s): History; Military; Soldiers, Add Tags
Add to My Group(s)
Go To Commenting
The views expressed herein are the sole responsibility of the author and do not necessarily reflect those of this website or its editors.

Let Us Venerate Our Enemies; It's the Right Thing to Do

The Man in the Invisible Mask

Confessions of an ANTIFA Hunter

Obama to Negotiate with Panama Over Rights to the Erie Canal