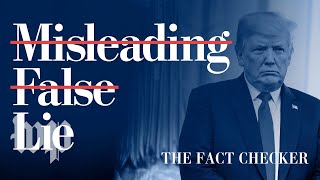 Not just misleading. Not merely false. A lie.
(Image by You Tube)   Details   DMCA

I thought I had seen it all -- but then along came Trump. Now, I have said this before, but it bears repeating: If Trump ran as a Democrat and agreed with me on every position, I would not have voted for him. He is a vile man who cheats on his spouses and has gone bankrupt running a casino, a business that is literally a license to print money.

He has the personality of a man who sits on the corner stool in a darkened bar, hunched over a glass of tepid, flat beer, boasting to anyone in earshot about how great he is and all the things he has done in his life. In reality he is just lonely old man with no one in his life, desperately crying out for attention because he lost everything that really mattered as a result of being a lying, cheating backstabber.

The powers that be in the Republican Party knew Trump was a liar and a conman when he announced he was running for president. Yet they still supported him, as it meant furthering the "conservative," i.e., billionaires' agenda. They knew Trump would be the Republican majority's rubber stamp.

We've seen collusion, financial crimes, constant lying, the destruction of the United States' standing among our allies, and Trump's embracing of strong men and dictators, yet the Republican majorities in both chambers of Congress abdicated their responsibility to the republic. They failed in their oversight of the executive branch and did everything they could to derail, stymie, and obstruct investigations. They put party over country.

TO WHAT expedient, then, shall we finally resort, for maintaining in practice the necessary partition of power among the several departments, as laid down in the Constitution? The only answer that can be given is, that as all these exterior provisions are found to be inadequate, the defect must be supplied, by so contriving the interior structure of the government as that its several constituent parts may, by their mutual relations, be the means of keeping each other in their proper places.

Almost every day Trump tweets out some inane nonsense proclaiming his innocence and whining about ongoing investigations. The worst thing this lying conman could have done was run for public office, as it was virtually guaranteed that all of his misdeeds, financial crimes, and dalliances would come to light. But the Republican majority stayed silent, or even defended Trump.

Remember: The party that impeached a president for lying about a blow job seems to be okay with this.

"I think most of us have a concern anytime you have a president who is trying to work through some very personal matters. I honestly think this president loves his family, and I think it has as much to do with trying not to have public discussions about something that is, for him, a private matter that he didn't want to have discussed with his family.

Related Topic(s): Conman; Disgrace; Justice; President; Republican; Tweet, Add Tags
Add to My Group(s)
Go To Commenting
The views expressed herein are the sole responsibility of the author and do not necessarily reflect those of this website or its editors.