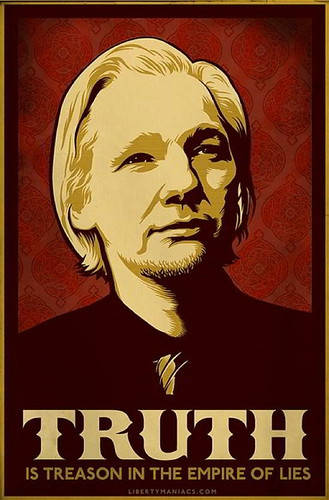 The saga of Julian Assange's persecution has been defined by leading human rights organizations as one of the most significant threats to press freedom in our time. The WikiLeaks founder published, among other devastating leaks, the "Collateral Damage" video obtained by Chelsea Manning that revealed war crimes being committed in Iraq by U.S. soldiers. As U.S. authorities attempted to extradite Assange for alleged violations of the Espionage Act of 1917, he took refuge for several years in the Ecuadorian Embassy in the U.K. until he was imprisoned in a high-security London facility in 2019. The WikiLeaks founder has since been kept in appalling conditions there, and although a British judge denied the U.S. extradition request due to concerns for Assange's health were he to be sent to an American prison, the Biden administration is still appealing the decision.

"Scheer Intelligence" host Robert Scheer has been a staunch defender of Julian Assange, noting the importance of the revelations he made as well as the profoundly dangerous threat his imprisonment poses to news publishers, journalists and news sources the world over. Scheer has done several interviews regarding the case, including with Tariq Ali, co-editor of the collection of essays "In Defense of Julian Assange"; Nils Melzer, the United Nations Special Rapporteur on Torture, who defines Assange's treatment as torture; as well as Pentagon whistleblower Daniel Ellsberg and, most recently, Pulitzer Prize-winner Chris Hedges, who have both publicly defended Assange throughout his persecution. This week Scheer is joined by John and Gabriel Shipton, Assange's father and brother, as they tour the U.S. to raise awareness and support for Assange's release from prison. The poignant conversation between Assange's family and Scheer adds a deeply personal dimension to a case that is both privately devastating for the family as well as publicly devastating for freedom of the press.

Speaking of the conditions in Belmarsh prison, where Assange essentially is being held in solitary confinement for 23 hours a day, Gabriel tells Scheer about the last time he was able to see his brother:

Related Topic(s): Extradition; Father; Intelligence; Julian Assange Imprisonment; Julian Assange Martyr; Public Interest; Public Perception; Wikileaks, Add Tags
Add to My Group(s)
Go To Commenting
The views expressed herein are the sole responsibility of the author and do not necessarily reflect those of this website or its editors.