Polls show that the American Majority is much more concerned about jobs than deficits. So why is DC talking only about deficits instead of jobs, when jobs are the medicine for deficits? And why is DC only talking about budget cuts as a path to fixing the deficits, when the deficits were caused by tax cuts and lack of jobs? In fact most of the "deficit cures" being discussed in DC don't make the deficit better, they make deficits worse because they kill jobs.

Now that the stimulus is running out, so is any sign of a jobs recovery. The stimulus stopped the economic freefall that was occurring under the prior administration, and restored at least some job growth. It worked, but it was not big enough. Much of it was wasted on tax cuts that leave behind only debt, and it is running out. At the same time, state and local government cutbacks are working against any current economic rebound. For the longer term, badly-needed restructuring of trade deals, development of a national industrial policy and removal of the plutocratic tax and regulatory changes that led to intense concentration of wealth have not occurred, keeping the economy from moving forward. See for yourself in the following chart: 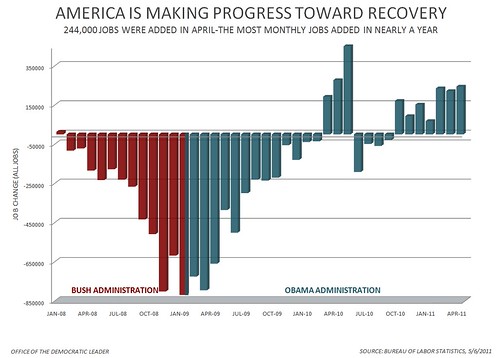 
Until needed changes are made the economy remains mired in the failed Reagan/Bush/Bush plutocratic, everything-to-the-top structure and cannot sustain itself without stimulus. The worst thing that could happen now is federal budget cutbacks on top of the state and local government cutbacks. Pulling that much out of the economy, laying off all those government employees, and ceasing to invest in the infrastructure and education that make us competitive in the world would be a tragic mistake.

Jobs In The News

Stimulus winding down, state and local governments cutting back, trade deficit increasing again... Which brings us to to this week's economic news. Reuters: Private sector job growth slumps in May,

The ADP report showed private employers added a scant 38,000 jobs last month, falling from a downwardly revised 177,000 in April and well short of expectations for 175,000. It was the lowest level since September 2010.

... A separate report showed the number of planned layoffs at U.S. firms rose modestly in May with the government and non-profit sectors making up a large portion of the cuts.

... The housing market, meanwhile, continued to struggle as a report from an industry group showed applications for U.S. home mortgages fell last week, pulled lower by a decline in refinancing demand.

The pace of growth in the manufacturing sector tumbled in May, slackening more than expected to its slowest since September 2009, according to an industry report released on Wednesday.

This chart from Business Insider shows what the Standard & Poor's Case-Shiller Index looks like on a graph chart: bad. National home prices are back to their 2002 levels, according to the index data released May 31.

... Moreover, consumer confidence unexpectedly declined in May to its lowest level in six months due to the lackluster job market and declining home values.

But DC is not only not talking about jobs, they are talking about austerity -- cutting the very things that create jobs. History and the experience of other countries as they struggle to crawl out of the economic collapse has shown again and again that government investment in infrastructure and education and scientific research and manufacturing are the path to recovery. England, Greece and others trying austerity are falling back into recession. Meanwhile China is investing hundreds of billion in high-speed rail and other infrastructure. Germany is investing in manufacturing. Others are investing billions more in infrastructure. All are pursuing green energy sources.

Mired in austerity ideology we are doing none of these. For example, on a PBS NewsHourdiscussion of the House vote rejecting a "clean" debt-ceiling bill Tuesday, Rep. Peter Roskam said,

Related Topic(s): Economy; Elections; Jobs; Majority; Recovery; Republican; Unemployed, Add Tags
Add to My Group(s)
Go To Commenting
The views expressed herein are the sole responsibility of the author and do not necessarily reflect those of this website or its editors.