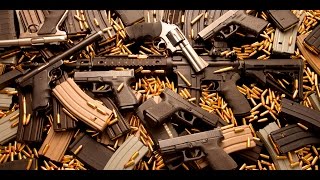 My beloved childhood friend, someone I've known since before elementary school, has lost his grandson in the latest Florida shooting.

He was a freshman in high school, a beautiful innocent, full of joy and promise. My sister cannot stop crying. Writing this article is the only way I can deal with it. I cannot yet bring myself to call.

Make no mistake about this: Sooner or later, these mass murders will strike you personally in your home and in your heart and in your soul.

You may see them as abstract ghosts, fleeting horror shows off in the distance. But there are so goddam many of them, it is absolutely inevitable you will lose someone you love very soon. Close your eyes and ask who it will be, and what that will do to you and yours for the rest of your lives.

It will be a stone in your core that will never go away.

America's gun holocaust has become a ghastly game of Russian Roulette and all of us are losing to the House, which is to say the gun industry.

The Manchurian Mafioso in the White House says it's a mental health issue, and for once he's absolutely right.

Trumputin and those like him are criminally insane when it comes to (among so many other things) guns. That the slumlord-in-chief has issued a statement blaming the victims, and without mentioning gun control, is par for his course.

The first thing to remember about gun violence is that it is A BUSINESS. There is an entire corporate infrastructure that makes BIG MONEY on these murders. Whoever makes and sells the automatic weapons and the bullets that do these slaughters makes a profit on them. Yesterday's shooting, like tomorrow's, puts money in their bank account. They will be enriched by the next mass slaughter and the one after that and the one after that.

They can haul out all the fake Constitutional rhetoric they want. But the National Rifle Association is out there promoting an industry that is IN BUSINESS to threaten your health, safety, legal rights, and long-term security.

By law, nothing beyond their own corporate bottom line has the least impact on them.

Every limitation on gun ownership COSTS THEM CASH. And it's no accident Trumptin's Russian backers chose the NRA (among so many others) to launder money into his campaign.

That they have warped the Bill of Rights comes with the territory.

Related Topic(s): Guns; NRA; Slaughter; Violence, Add Tags
Add to My Group(s)
Go To Commenting
The views expressed herein are the sole responsibility of the author and do not necessarily reflect those of this website or its editors.