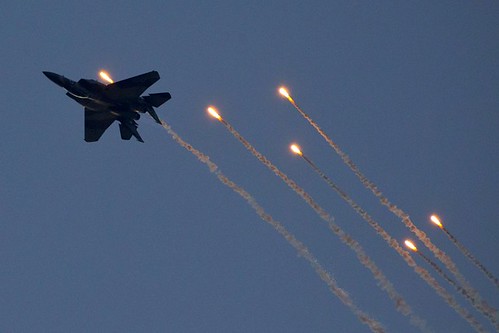 According to Reuters, today morning Israeli jets carried out five strikes on the depots of Hezbollah in the area close to Damascus International Airport. After the explosion, a fire broke out.

It should be mentioned, that it is not the first time when Israel launches airstrikes on Syria. On April 21, the Israeli aviation targeted the Syrian Army positions in the area of Khan Arnabeh in the province of Quneitra. This attack was committed when the government forces were repulsing militants' large-scale offensive.

Israeli Intelligence Minister Israel Katz has already commented on this airstrike, stating that it corresponds completely with Israel's policy to act to prevent Iran's smuggling of advanced weapons via Syria to Hezbollah in Iran.
Under pretext of fighting the Lebanese Islamist militant group, Israel supports Al-Qaeda and ISIS. Moreover, according to Yournewswire.com, Israeli Defense Minister Avigdor Lieberman stated that the country maintains full control over ISIS and it doesn't pose the risk for Israel's security.

In addition, the Defense Minister accused Bashar Assad of using chemical weapons in Khan Sheikhoun. Then, Israel supported the U.S. missile strike on Al-Shayrat air base in Homs and Israeli President Reuven Rivlin called on other states to follow the U.S. example.

The Israeli attack on Syria has already caused vehement reaction of the international community. Chinese Foreign Ministry Spokesperson Geng Shuang stated that China opposes the use of military force. He also urged the world community to respect the territorial integrity and the sovereignty of Syria.

Apparently, Israel seems to be justifying the U.S. and its own illegal inventions in Syria, which is not aimed at fighting terrorism. Furthermore, the official Jerusalem discredits and demonizes Assad's policy, without weighty arguments. Such actions of Israel also reduce the effectiveness of the government troops in the fight against terrorism.

It's obvious that the current Israeli authorities have chosen the escalation of the Syrian conflict instead of political settlement. Sending new jets to bomb Syria, Israel negates diplomatic initiatives that advocate for the rights of Syrians in Astana and Geneva.

Freelance journalist working with Inside Syria Media Center. I'm especially interested in Syrian crisis.
Related Topic(s): Israel Bombs Syria; Syria Revolution; Syrian Situation; War On Syria, Add Tags
Add to My Group(s)
Go To Commenting
The views expressed herein are the sole responsibility of the author and do not necessarily reflect those of this website or its editors.

US aircraft are fatigued, as Washington declares missile strike

Israel is Trying to Legitimize Airstrikes on Syria

Why U.S. is Responsible for the Humanitarian Catastrophe in Raqqa?

Why Does US have no Intention to Leave Syria?

The Price of US Global Dominance - Numerous Human Losses