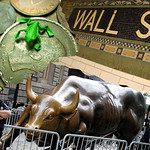 The answer to this question depends on the person you ask. Capitalism can be a blessing to those who have taken advantage of the opportunities it provides them to amass wealth and fame and the freedom it bestows to engage in free trade. Capitalism can also be brutal to those who are not resourceful enough to survive its intense competition and, as a result, they will be punished by the system.

As we know, capitalism is based on material incentives. People do not sacrifice their time and precious resources if they do not expect a reward in return and this reward is what motivates them to make a commitment and every effort to succeed. Under capitalism, people are able to do good things for others while pursuing their material goal, or they are able use their talents to benefit others. That is legitimate. We should, however, be wary of greed and deception; however, I don't know at what point lawful endeavors pivot into greed. Obviously, capitalism, like any other well-intended system, may get a bad rap, not because it is inherently flawed but because some people refuse to play by the rules or violate ethical principles. Even the financial crisis of 2008 was not the result of some inherent fault in the system but the fault of people who stepped outside the boundaries of ethical responsibility and sacrificed the welfare of unsuspecting people for their personal gain.

Under capitalism, some people may have a false sense of success that is measured in terms of money. Although, money plays an important role in facilitating our lives, it is not the only measure of success and happiness, socially or individually. It is, of course, good to be rich; however, that is not the purpose of our life. Capitalism may also produce outcomes that are not considered fair or acceptable to all, as evidenced in our current state of income inequality in America. This issue has been resurfacing in the public domain recently as a troubling concern. But who said we should be all equal when it comes to income and wealth? Complete equality is impractical and unnecessary. A medical doctor, for example, who has invested years of his life and several hundred thousand dollars in education and toilsome training is not going to be equal to a high school dropout. Capitalism places different values on different skills and talents.

Capitalism is like a self-correcting mechanism that works best if it remains untampered with and is left to its own forces. Under capitalism, for example, there should not be a government-imposed distribution system; people should be rewarded according to their contribution to production and how the market system prices such contributions. Capitalism is based on the survival of the fittest; competition is so powerful that only those who possess what is takes to succeed will survive. Understanding the dynamics of the market and having education, stamina, and knowledge of the nuts and bolts of business and the environment within which they operate are the keys to success under capitalism.

Nobody loses when an entrepreneur, like the founder of my health club, an Iranian-born immigrant with sharp business acumen and perseverance creates a successful company that in turn creates thousands of jobs for people who may otherwise remain unemployed and may be dependent on government assistance that is financed by taxes paid by the rest of us. He is of course getting rich, as he deserves, and others are getting jobs, income, and not to mention, free membership in his club. It is like a win win game. Successful businesses need not be a zero-sum game, nor capitalism. Conversely, I know many immigrants who come to the U.S. with the false impression that once they are here, everything will be provided for them by government. They are imagining some kind of money tree in their backyards with lots of low-hanging fruit to pick at will. Once their expectations prove to be wrong, they get upset and start whining and complaining, thinking that socialism will fulfill their expectations better. Well, it does not.

Believe me, capitalism works efficiently and often fairly. However, there is no guarantee of smooth sailing. There might be bumps in the road, falling, cuts, and bruises. However, relentless curiosity, perseverance, and prompt response to the needs of consumers help business people to get you back on your feet. Consider the example of one the most successful business entities in the world, Starbucks, whose CEO is now a candidate for the U.S. presidency. A simple idea has been translated into a global business with multi-billion-dollar annual sales as well as tens of thousands of jobs, thanks to capitalism. The company was not successful right from the start. Its administrators had to always be vigilantly watchful of the dynamics of the market, the changing needs of their customers and demographics, and the environment that impacted their business. Instead of scolding or blaming when something doesn't please you, think about how many jobs have been created by Starbucks, how many lives have been changed, and how much the public's welfare has been elevated as a result. Many wealthy CEOs of big companies contribute to philanthropic causes that otherwise may not have benefited were it not for capitalism.

Again, I admit capitalism can be brutal at times because it is based on the survival of the fittest. Even though this may well be the case, it is not always a losing game. Free trade coupled with competition, two essential building blocks of capitalism, guarantee that if an entrepreneur misuses his or her power, collective forces of consumers will kick in and react. Market forces speak loudly, and entrepreneurs have to listen. Government regulations and the threat of lawsuits work the same way. The resulting negative publicity directed at a company will tarnish its reputation, and the company's stock will suffer as investors pull out and take their resources elsewhere.

Accident, cronyism, and deceitful practices are rarely the sources of wealth and success under capitalism; these things may exist in the system, but they are not the norm.

Reza Varjavand (Ph.D., University of Oklahoma) is associate professor of economics and finance at the Graham School of management, Saint Xavier University, of Chicago. He has been an avid participant in many professional organizations and active in (more...)
Related Topic(s): Capitalism; Capitalism Failures; Competition; Happiness; Incentives; Investors; Responsibility; Reward; Starbucks; Success; (more...) Trade, Add Tags  (less...)
Add to My Group(s)
Go To Commenting
The views expressed herein are the sole responsibility of the author and do not necessarily reflect those of this website or its editors.

Legalized Market for Human Kidneys: a Problem or a Panacea?

Growing Underground Economy, A Cause For Concern

Looking Back To Move Forward: Resuscitating The Ailing U.s. Economy

Ignoring Scientific Realities is Not Good for America

The Evolution of God, Is God a Figment of Human Imagination?